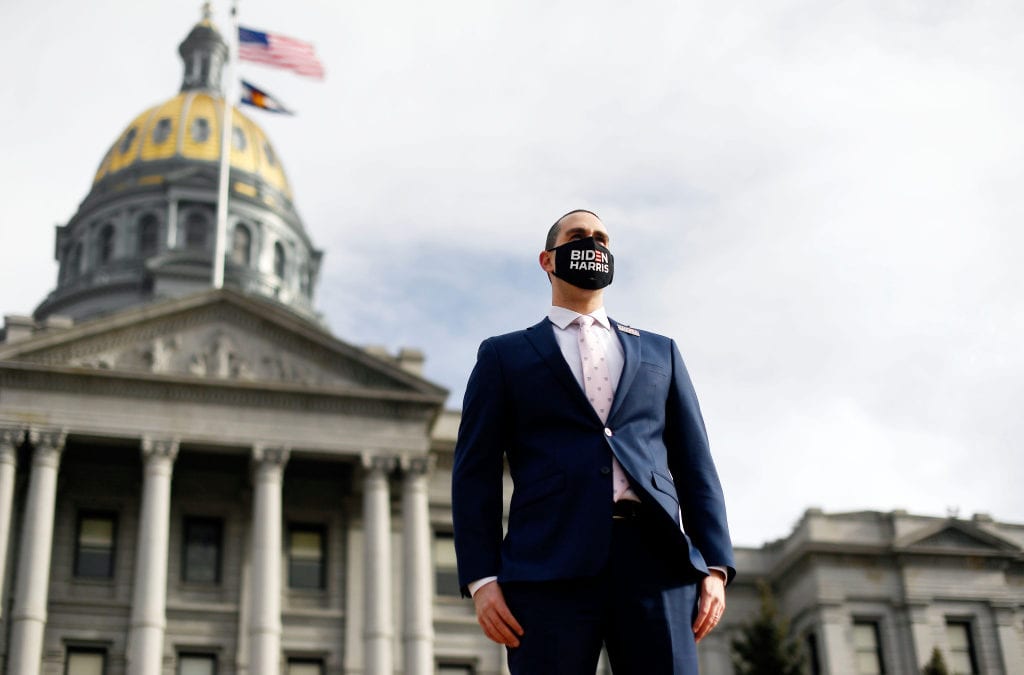 On Monday morning, Alan Kennedy will stroll five blocks from his home to the state Capitol, coffee in hand, to help put an end to what has become one the most tumultuous post-election periods in American history.

Kennedy, a 36-year-old attorney who teaches constitutional law at the University of Colorado at Denver, is a member of an exclusive — and recently much talked about — club. He is one of the nine Colorado electors in the Electoral College, which according to the U.S. Constitution, has the definitive say on who becomes the next president and vice president of the United States.

Each state’s electors will meet in their respective statehouses at noon Monday to cast their ballots. Joe Biden has amassed 306 electoral votes to President Donald Trump’s 232.

To be sure, there is one final step before the 2020 election goes into the books: A joint session of Congress will meet Jan. 6 to ratify the Electoral College’s vote count. Election experts say it will be next to impossible for Republicans to stop the inevitable at that point.

“Monday will settle the 2020 election once and for all,” Kennedy said. “I’m simply thrilled to be a presidential elector — to be part of the democratic process — to elect Joe Biden and Kamala Harris.”

Kennedy’s vote, and those of his fellow Democratic electors — hailing from Pueblo to Greeley to Arvada — are getting particular attention this year because of the numerous legal challenges Trump, who has yet to concede the race, and his allies have leveled at election officials in multiple states seeking to stop vote counting or to invalidate ballots cast for Biden.

Jennifer Hendricks, a professor of constitutional law at the University of Colorado Law School in Boulder, said what is normally a little-mentioned ceremonial formality in the quiet weeks before Christmas affirming the previous month’s presidential election results is something more in 2020.

“The reason we are nonetheless transfixed by it is there are active efforts in certain parts of the Republican Party to overturn the results of the election,” she said.

Hendricks said the vote in the 538-member Electoral College will bring a sense of “finality” to what still feels like, to some, unfinished business. The president himself over Thanksgiving weekend said he would step down if the Electoral College formalizes Biden’s victory — though he hasn’t stopped lashing out at the results.

Susan McFaddin, a sustainable home builder in Fort Collins, will make the 60-mile trek to the statehouse Monday to cast her vote for Biden. She represents Colorado’s 2nd Congressional District in the Electoral College.

“I am so proud I get to vote for an administration that cares about the environment, clean jobs and racial justice,” she said. “It’s all about pride for Joe Biden and Kamala Harris and the future.”

If Colorado’s presidential electors sound unabashedly partisan it’s because they are. Members of the Electoral College are typically active party members or party officials. The Republicans had their own slate of nine — representing each of the state’s congressional districts plus two statewide electors — ready to head to Denver on Monday had Trump prevailed over Biden in Colorado.

Because of a U.S. Supreme Court ruling earlier this year, electors in Colorado cannot go rogue and vote for whoever they want, meaning all nine electors will be pulling the lever for Biden.

Electors run for the position at party assemblies and conventions that take place earlier in the year. McFaddin, 60, had to duke it out with 13 others interested in the post. She said she’s long been involved “behind the scenes” in local Democratic politics, including working on behalf of soon-to-be U.S. Sen. John Hickenlooper when he was mayor of Denver.

“There’s something in my blood,” she said.

Kennedy said he too has put in his time in the political trenches, serving as a delegate to the Democratic National Convention in both 2012 and this year. It’s the same story for Bryan Hartmann, a Highlands Ranch resident representing the state’s 6th Congressional District in the college.

“I’ve been a lifelong party activist and operative,” he said. “As I reflect on my experience, it’s hard to believe how many election cycles have passed since I began my activism as a Young Democrat.”

Hartmann said he’ll likely pop on some hip-hop or house music on his 30-minute drive to Denver on Monday. Though, with the tumult of the post-election period still ongoing, “there’s a good chance I might play relaxing, meditating sounds of rain or similar tones,” he said.

“When you think about the enormity of just 538 people — out of some 330 million — determining the fate of so many, it’s a big responsibility,” Hartmann said. “A decisive majority of Colorado voters and the American people have spoken in this historic election. It’s time to ensure that we uphold the will of the majority and fully acknowledge their decision.”

Ironically, all of the Democratic electors The Denver Post interviewed for this story were either lukewarm about or completely against the Electoral College. Polly Baca, a former state lawmaker who has served as a presidential elector on three previous occasions and will do so again Monday, said she’d like to see future presidents elected via a national popular vote.

“I believe in the national popular vote — I don’t see any reason to have an Electoral College,” she said.

Colorado voters in November passed Proposition 113, which commits the state to joining like-minded states in pledging its presidential electors to the candidate who wins the most votes nationwide. While the national popular vote compact doesn’t get rid of the Electoral College, it greatly diminishes its role as a complex arbiter of swing-state presidential campaign strategy.

But the compact doesn’t take effect until states representing 270 electoral votes — the amount needed to win the White House — have joined. So far, the states that have signed on account for 196 electoral votes.

Robert Alexander, a political science professor at Ohio Northern University who specializes in the Electoral College, said the institution “has never been very popular.”

“But recently views of it have become increasingly polarized with Democrats and Independents solidly looking to ditch the institution and a majority of Republicans supporting the institution,” he said.

Trump in 2016 and George W. Bush in 2000, both Republicans, won the Electoral College — and the presidency — while losing the popular vote. Alexander said in the late 1960s, around eight of every 10 members of both parties supported abolishing the college, and the House voted to do just that, with President Nixon’s support. But the bill never came to a vote in the Senate.

While Monday’s vote “could bring some closure to the 2020 election,” Alexander said, “… many Democrats simply will not rest until Joe Biden takes the oath of office in January.”

“President Trump’s most die-hard supporters still believe that even if the Electoral College votes as anticipated, the President has a path to a second term through a confrontational meeting of the joint session of Congress,” he said, noting that such a development would be extremely unlikely. “So, I don’t expect Monday will fully close the door on the election for many.”

Either way, Baca said the vote at the statehouse is a critical step to bringing the post-election chaos that has swirled throughout the country to an end.

“It may not stop the tactics of this man in the White House, but it will put another nail in the coffin of his presidency,” she said.