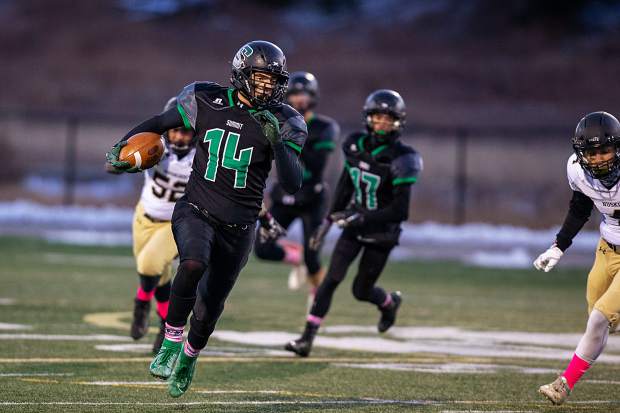 DILLON — When Daniel Gonzalez thinks back to the importance of his senior season of high school football, the 2020 Summit graduate puts it simply: Without a final campaign, he wouldn’t be where he is today.

“There are ballers on that (Summit) team that could play at the next level, for sure. I definitely wouldn’t have taken it well,” Gonzalez said Tuesday about the postponement of the high school season. “Hopefully, those guys get a chance to show off their skills and stuff. There are players all over the country that need their season to go to the next level.”

Gonzalez is now a member of the Colorado Mesa University football program. The Mavericks are a Division II NCAA team that plays in the Rocky Mountain Athletic Conference, which also has postponed its season.

The opportunity to play at the Division II level came for the 6-foot-2-inch, 215-pound Gonzalez at the eleventh hour of his high school sports career. Last winter, around the time of the traditional early February national signing day, Mavericks coaches reached out to Gonzalez. They asked whether he’d be interested in a spot on the team as a preferred walk-on.

“He’s a guy I’ll always relate to for future teams about how much hard work and determination gets you places,” Wagner said. “… I’ve talked to him about what this means for him, and we’re bummed about the situation of not being able to play this fall. But we’ve both said this is an opportunity for him and my players to get stronger in the weight room. This is a great opportunity for him to put on muscle, speed and develop his craft. And, knowing Dan, he’s going to do that: commit to the long process.”

The state’s governing body for high school sports, the Colorado High School Activities Association, plans to begin this coming football season in March, so it remains to be seen how current high school players will have their college choices affected by CHSAA’s season postponement.

At the collegiate level, The Rocky Mountain Athletic Conference announced Aug. 6 that a council of school presidents postponed football and other team sports seasons and conference championships to the spring semester. The conference then announced Friday, Aug. 14, that it will not host a football championship as individual schools will schedule conference and nonconference opponents at their own discretion.

For Gonzalez, he said all of the uncertainty and changes won’t affect him that much. That’s because he’s unlikely to see much game time for the Mavericks this season as a preferred walk-on. Like many freshmen, his first season will be about learning the playbook, improving physically and settling into a role and positional path for Colorado Mesa. Gonzalez said it remains to be seen if he ends up playing offensive line, tight end or defensive end for the Mavericks.

With the Mavericks’ football spring practice and game schedule yet to be announced, Gonzalez is focused on learning from older players and preparing to compete for a role his sophomore season. After beginning classes Monday, Aug. 17, Gonzalez will continue attending mandatory workouts this week. Gonzalez said the team plans to return to full-padded practice Sept. 10. Without a traditional fall season, Gonzalez said the current plan is for the Mavericks to divide members of the program into separate groups that can scrimmage each other once a week.

In terms of COVID-19 precautions and protocols, Gonzalez said Colorado Mesa players have their temperatures taken before every workout and log health symptoms into an application each morning. If they receive a “green screen” from that app, the players are permitted to travel with a facial covering to academic and athletic commitments on campus. He said players are also tested randomly for the virus about every other week.

Although he feels schools are taking good precautions to keep athletes safe from COVID-19, Gonzalez said he believes that if athletes can attend classes with students they don’t know, football games should take place. He said the Colorado Mesa football team members filled out a survey earlier this summer in which players indicated they were ready to return to play despite virus concerns.

“I definitely think that football should be played,” Gonzalez said. “A lot of people put their whole lives into sports. They turn to sports when there’s nothing else to turn to.”