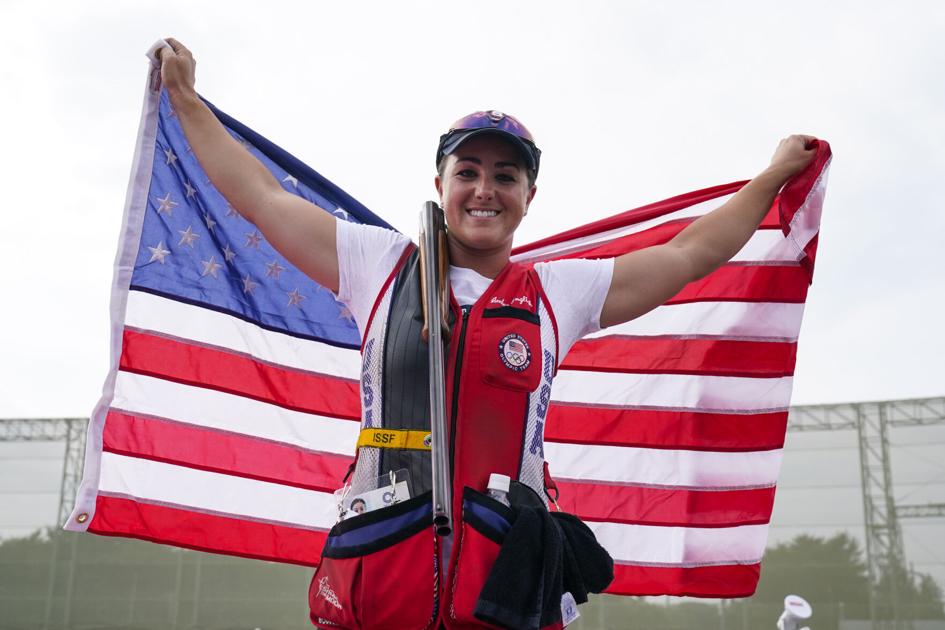 “It sets the tone of what can happen at USA Shooting,” Hancock said. “Our athletes have been shooting at a really high level for quite a few years now. Because we’re a small sport, we don’t quite get the recognition, but looking at the number of medals we win on a yearly basis, it’s impressive.”

The United States’ shooting showing in Tokyo got off a strong start with 20-year-old William Shaner’s gold in 10-meter air rifle on Sunday.

English kept the good vibes flowing in the opening shotgun event, hitting 56 of 60 targets to set an Olympic record and beat reigning skeet champion Diana Bacosi of Italy by one. Wei Meng of China took bronze after tying a world record in qualifying.

Amber English, left, and Vincent Hancock, right, both of the United States, celebrate taking the gold medal in the women’s and men’s skeet with Olympic medalist Kim Rhode at the Asaka Shooting Range in the 2020 Summer Olympics, Monday, July 26, 2021, in Tokyo, Japan.

English attended Cheyenne Mountain High School and the University of Colorado at Colorado Springs, and is a member of the World Class Athlete Program.

Hancock capped the two-day tone-setting tally with his own Olympic record, hitting 59 of 60 shots to add another gold medal to the ones he won in Beijing in 2008 and London in 2012. Abdullah Al-Rashidi of Kuwait won his second straight bronze after competing at the Rio Games as an Independent Olympic Athlete.

English and Hancock have known each other since they were 16, so reaching the top step of the same podium made it extra special.

“I love that girl like a sister and now we both have medals around our neck,” Hancock said.

Each took a step back on their way to the top of the podium.

For English, it was the death of her father a few years ago and the disappointment of coming up just short of making the U.S. team at the 2012 and 2016 Games.

The 31-year-old worked her way back into position to make the 2020 team, training while working to become an Army officer in Fort Benning, Georgia. English, who comes from a deep shooting family, finished third at the 2018 world championship and climbed to 24th in the ISSF world rankings with seven top-10 finishes the past three years.

English and Bacosi each hit 47 of 50 targets to reach the final and the American earned gold by hitting her final 10 attempts while the Italian missed her third shot.

“I’m very, very glad,” English said. “This has been a long time coming.”

Hancock has been the world’s best skeet shooter, winning two Olympic golds, four world championships and six World Cup events. He also was the first American skeet shooter to complete a perfect World Cup event, hitting every target at a 2015 competition in Mexico.

Hancock was not in the right frame of mind at the Rio Games and it cost him in a 15th-place finish.

The 32-year-old from Fort Worth, Texas, needed a shoot-off to get into the finals in Tokyo after tying with six others, but he was on the mark once in, hitting his final 34 shots to beat Jesper Hansen of Denmark by four.

Hancock pumped his fist after hitting the last target, raising his arms as the limited crowd started a chant of “U-S-A!”

After the medal ceremony, English and Hancock were joined for a photo with fellow shooter Kim Rhode, the first U.S. individual Olympic athlete to medal in five consecutive Games and an alternate on this year’s team.

“All the skeet shooters are very close and we’re just ready to keep it rolling,” English said.

They’re certainly off to a good start, thanks to two skeet-shooting friends with gold hanging from their necks.