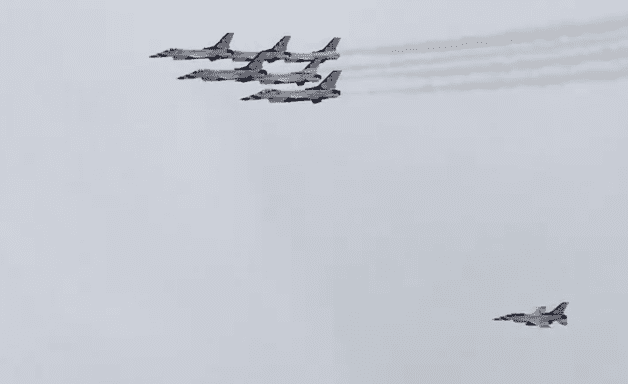 Coronavirus first responders in Colorado got a boost Saturday from the U.S. Air Force Thunderbirds, who completed an hour-long flyover of the state honoring the workers.

The F-16 Fighting Falcons began with an airborne tribute for the U.S. Air Force Academy commencement in Colorado Springs.  Vice President Mike Pence gave an in-person address at the event.

That’s a wrap! Stay tuned for photos from today’s graduation ceremony. We will get them shared soon as we can! #USAFAGrad2020 pic.twitter.com/t5hGmc14sl

The Thunderbirds continued on with the statewide flyover, which took the pilots over more than 40 medical facilities.

The Thunderbirds said the eight-jet, hourlong flyover was a tribute to health care workers, police, military personnel and other essential employees.

“Our team is honored to extend our heartfelt gratitude to the countless Coloradans working every day to support their communities during this difficult time in our nation,” Lt. Col. John Caldwell, the commander of the demonstration squadron, said in a news release.  “We want Coloradans to look up from their homes and enjoy the display of American resolve and price while keeping frontline responders in their hearts.”

Here’s the flight path across the state:

Note: the flyover serves as a salute to the healthcare workers, first responders and other essential personnel on the front line against #COVID in the Centennial State 🏔#AirForceSalutes pic.twitter.com/JfZMTfEBA1

I live in Colorado, but I’m spending a few weeks weathering this quarantine from my parents’ house a few states away.  Between Saturday’s Thunderbirds performance and Sunday’s Reopen Colorado protests, I kind of wish I was back in Colorado for the weekend – that flight path goes right over my house!

Here are a few more videos of the flyover:

Thunderbird flyover today. Hit all the major cities in Colorado and flew over major hospitals. Great view from my roof pic.twitter.com/draITnVTGP

Thunderbird flyover from CO Springs north through Den to Ft. Collins was the badassery we needed pic.twitter.com/b4DSolU8mm

A big thank you to all of the coronavirus responders, both in Colorado and across the country!