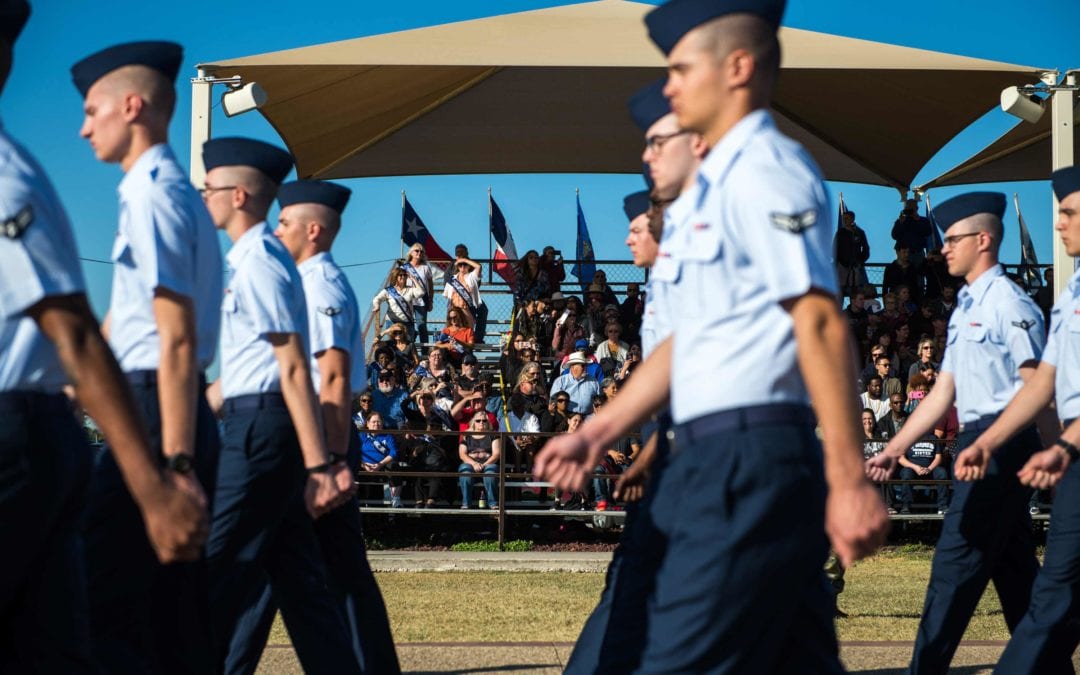 The U.S. Air Force has suspended family-attended graduation events at Basic Military Training at Joint Base San Antonio-Lackland, Texas, in an effort to stop the spread of the novel coronavirus, known as COVID-19.

“Each year, about 40,000 airmen march across the parade field with up to 7,000 family members in attendance each week for the momentous occasion,” Maj. Gen. Andrea Tullos, 2nd Air Force commander, said in a release. “Gatherings of this size increases the possibility that the virus could be transmitted to our training population.

“We realize families want to show support to their loved one and they will be disappointed they can’t participate in the graduation events, but we have a responsibility to protect not only our airmen but those citizens they will come into contact with as they travel to their follow-on training locations.”

Lackland officials said they will monitor and discuss appropriate protocols with medical experts “to determine when guest attendance at graduation events will resume,” the release states.

Meanwhile, to minimize exposure, cadets at the Air Force Academy in Colorado Springs have been asked to halt their travel.

The academy on Saturday said it has restricted official travel outside the United States for cadets, cadet candidates and permanent party through the end of March; leisure travel to countries currently reporting at Centers for Disease Control Level II alert — to practice enhanced precaution — has also been banned for the rest of the month, according to officials.

Over the weekend, the Air Force canceled two events — Spark Collider and Pitch Bowl — which had been scheduled for March 10-12 in Austin, Texas. The events will now take place virtually on March 12, the service said Tuesday.

At Buckley Air Force Base, also in Colorado, the child development center has been temporarily closed “since a parent (family member) tested positive by the state for coronavirus,” Stefanek said.

In a Facebook video, Col. Devin Pepper, commander of the 460th Space Wing, said the wife of a National Guard member with the 4th Space Warning Squadron tested positive for the coronavirus following a trip to India in recent weeks.

“I want to be clear: The wife has not been on the installation,” Pepper said. “The family right now is in isolation and is being quarantined at their home.”

Meanwhile, the service has begun taking passengers from the Grand Princess cruise ship that docked in Oakland, California, on Monday.

Twenty-one people aboard the ship have been confirmed to have the virus. The ship had originally been scheduled to dock in San Francisco.

The passengers are being moved to Travis Air Force Base, California; Joint Base San Antonio, Texas; and Dobbins Air Reserve Base, Georgia.

As of Tuesday, the virus has infected more than 117,000 people across 103 countries, according to the World Health Organization, as reported by The New York Times.