After numerous twists and turns, Colorado high school football players return to game they love: “This is what we’ve waited all year for” 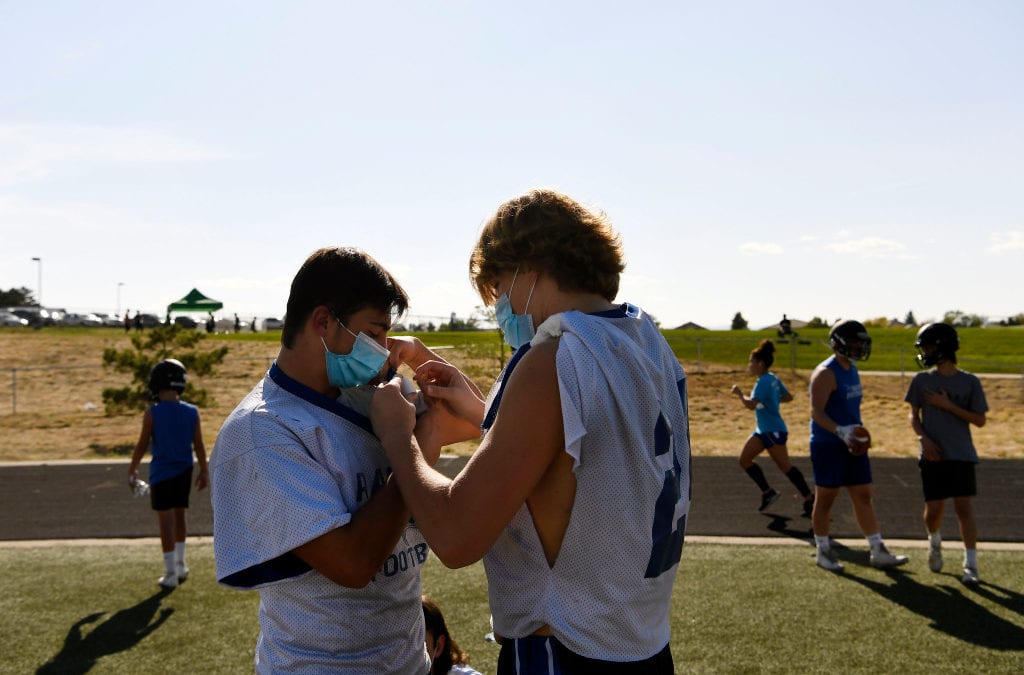 HIGHLANDS RANCH — The boys wore masks and carried football helmets as they walked down the hill toward their grassy 100-yard sanctuary.

No more drama, delays, or false promises. The game they love, finally, was back.

“This is what we’ve waited all year for,” said Kyle Lindbloom, Highlands Ranch High School’s new starting quarterback, in between deep-masked breaths after the team’s first practice Thursday. “You get to come out here and play with all your brothers.”

The Colorado High School Activities Association and Gov. Jared Polis paved the way for fall high school football, with games starting Oct. 8, after initially pushing the season to spring. The reversal was celebrated with nearly 80 percent of all schools opting for autumn.

But at what cost?

For Highlands Ranch, the season indecision prompted head coach TJ Rubley and his Kansas State-bound starting quarterback son, Jake, to move their family to Iowa — where prep football practice started back on Aug. 10.

“From a parent’s lens, they’re doing what a lot of parents are doing around the country — finding different outlets for their kids to compete,” Highlands Ranch athletic director Darren Withey told The Denver Post. “But one of the greatest benefits we have at Highlands Ranch is that we come together. Our roots are strong. Our families are tight.”

It spelled new opportunity for Lindbloom — a former Highlands Ranch safety now playing QB. “It feels good to finally be able to step up,” he said. The same for new head coach Tyson Lundquist — a longtime assistant and Highlands Ranch graduate (’97) — whose familiarity gives the Falcons confidence amid so much uncertainty. Lundquist called his promotion a “dream come true.”

On Thursday, players broke out into well-spaced position groups for the team’s first practice, with timed water breaks to avoid mass gatherings and constant chatter to enforce health guidelines amid the pandemic: Put your mask on! … I know it stinks, but I’d rather be playing! … Space out!

For some Falcons, it marked another investment in their football future as scholarship hopefuls. A fall season is expected to increase their exposure to college programs, especially for late bloomers, with more time for players to choose their school.

For many others, it’s simply a chance to play out their senior seasons.

It’s a positive spin on a strange situation.

“There are two kids in particular that wouldn’t be able to play had the season gone to the spring because of their college commitments,” Lundquist said. “I can think of six players already that colleges are excited to come and see because they are playing in the fall, so they’re going to have a great opportunity.”

Andy Lowry embarks on his 27th season this fall as head football coach at Columbine High School. Nothing could prepare him for 2020, but a semblance of normalcy returned Thursday for the start of practice.

“The intensity level picked up a lot coaching and for the kids,” Lowry said. “Maybe it was putting on a helmet for the first time of the year. It actually felt like football.”

Lowry is also a realist. Completing the season as scheduled will be difficult if the spread of the virus is not curbed among Colorado high schoolers. Teams are required to administer daily temperature and symptom checks, but it is up to the athletes and their families to get tested for coronavirus. A positive result triggers a series of quarantine or isolation procedures for the affected student and those within close contact.

Lowry said his daughter, a Columbine student, was forced into a quarantine period after unknowingly sharing the library with a COVID-19 positive student. However, a shift to remote learning does not spell trouble for the football season — so long as players and coaches have not been exposed to the virus.

“If I had a dollar for how many times that I’ve told our kids to social distance, I’d be very rich right now,” Lowry said. “We’ve been telling the kids that it’s in their hands, and they have to help us out, so that coaches can actually coach. That makes a huge difference. I actually heard the kids telling each other (Thursday) to social distance.

“I think we’re going to need a lot of help from God and a lot of luck in keeping us healthy. We can have all the plans in the world that we want until somebody ends up testing positive.”

“In our small area, we don’t have a movie theater or really anything for people to do if they don’t have sports to go watch,” said Sara Crawford, athletics director at the K-12 school. “Having those Friday night lights on is everything for this community. It’s been so missed.”

Kit Carson senior Sullivan Farmer is one of four brothers to have played football for the school, and with about 30 students in his graduating class, he said: “It’s like a big family.” Minus football, though, many of his teammates have struggled.

“We’re so sports-oriented in this small community, that without it, a lot of kids have been kind of lost,” Farmer said.

The pendulum swinging back and forth from spring to fall football proved exceedingly difficult.

“The kids would get so excited, run to my office, and ask: ‘Is it true?’ Then we find out, nope, it’s not happening,” Crawford said. “It was bursting their bubbles and it was a sad thing to see that happen. When it did finally come down, it was almost like they were afraid to get too excited.”

Not anymore. This week marked the end of their long football drought.

“The boys take a lot of pride in their team and representing their community,” Crawford said. “They’re really excited to be a part of something that’s bigger than themselves again — it’s been a while.”