After 2 Years, a Tire Is Removed From an Elk’s Neck in Colorado :: WRAL.com 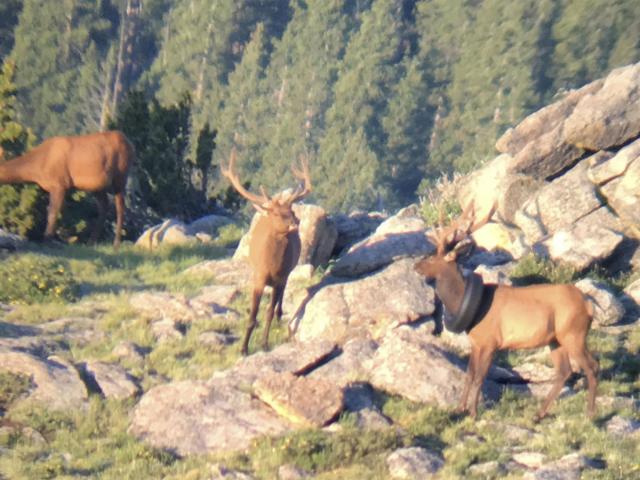 On Saturday night, Patrick Hemstreet was in his home office in Pine, Colorado, checking his email when his wife called to him from upstairs, telling him to look out the front window. Among the pine trees and aspen, Hemstreet saw a herd of about 40 elk, including a large bull crowned with a bristling rack of antlers.

“He was right there,” Hemstreet said. “Our friend with the tire around his neck.”

He knew immediately the person to call.

For more than two years, residents of Pine, a small town about 30 miles southwest of Denver, have been sending in reports to the Colorado Parks and Wildlife authorities whenever they saw an elk that had somehow shoved its head through a tire.

The tire slid down the elk’s neck and became stuck there, locked into place as its antlers developed and branched out. Wildlife authorities wanted to remove the tire, and solicited the public’s help in locating the elk.

Hemstreet, who moved to Pine about one year ago, was among those who had reported the elk to wildlife officials when it appeared in footage from his trail camera, or when he spotted it on his 10-acre property, mingling with a herd, grazing or fighting other bulls during rutting season.

But this time, with the elk so close, was different, Hemstreet said Tuesday.

Hemstreet sent a text message to Dawson Swanson, a wildlife official who lives nearby. The two had communicated about the elk so often that Hemstreet did not have to specify what he was texting about.

Colorado Parks and Wildlife, which is part of the state’s Department of Natural Resources, said in a statement Monday that Swanson tranquilized the elk, which is 4 1/2 years old and weighs 600 pounds. He and another wildlife officer then sheared off the elk’s antlers so the tire could be pulled over its head.

It was the fourth time in a week that wildlife officers had tried to tranquilize the bull, the department said. The process can be challenging because tranquilizer equipment works only at short range, Swanson said.

Wildlife officers had been looking for the elk since July 2019, when an officer spotted it as he was conducting a population survey of bighorn sheep and mountain goats in the Mount Evans Wilderness, a national forest area.

“We have probably tranquilized six to 10 bull elk and buck deer every year, in everything from basketball hoops to trash cans,” Scott Murdoch, a wildlife official who helped remove the tire from the elk’s neck, said. “It is pretty common practice that we will cut antlers off.”

How the elk got its head through the tire in the first place remained a mystery. The tire may have been part of a feeder of some kind, Colorado Parks and Wildlife said in its statement, though Murdoch said it may have been used as a tire swing.

After the first sighting of the elk with the tire, it spent the next two years wandering between Park and Jefferson counties, disappearing for long periods, particularly in the winter, wildlife officials said.

In May and June, four attempts were made to catch up with the bull in Conifer, about 8 miles north of Pine. The sightings picked up in September and early October near Pine as the bulls became more active during the rutting season, wildlife officials said.

“They just walk around, eat and mate,” Hemstreet said. “He always sticks out. He is big.”

Hemstreet said that the elk had appeared near his home at least nine times before he made that final call Saturday. The first time was about one year ago when it wandered into the range of his trail camera, he said.

“I couldn’t believe what I saw, so of course I posted it on social media, and I started Googling and found out they had been looking for him for several years,” he said. A neighbor gave him Swanson’s cellphone number.

After he received Hemstreet’s text Saturday, Swanson pulled into a neighbor’s yard to head off the herd, which had already started to wander away. He took a shot with the tranquilizer, and the herd darted off into the trees.

He and Hemstreet gave chase. It was growing dark. With flashlights, they plunged into the dense and steeply sloping woods. It took 45 minutes to track the elk down, and several more attempts to tranquilize it. (Elk metabolize tranquilizers faster during rutting season, Swanson said.)

Murdoch, the other wildlife official, arrived to help. But a saw blade broke, and its battery died, as the officers tried to slice through the steel at the edge of the tire, which was of a type used on small cars or trailers. Swanson and Murdoch, who was carrying a fresh saw blade and battery, decided that the only way to remove the tire was to use the saw to shear off the elk’s antlers.

More than two hours had passed since the first tranquilizer dart had struck the elk. The tire, packed with debris and dirt, was finally wrestled over its head, and it started to come to after it was given a reversal dose. It stood, unsteadily at first, and wandered off into the dark, Murdoch said.

In the days since, Hemstreet said he has taken to looking out into the hills, searching for the elk.

“Been keeping my eyes out,” he said. “We want to make sure he will do well.” This article originally appeared in The New York Times.