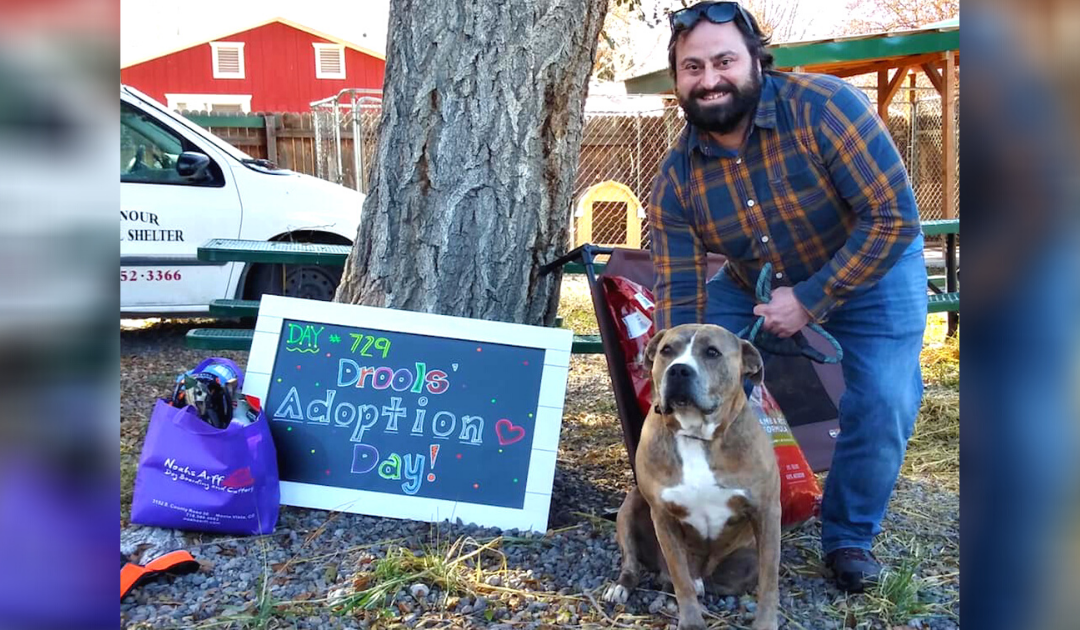 Adoption stories are some of the most heartfelt stories you’ll hear.

The tales of many great rescues give us hope in finding a home for the plethora of doggies and kitties that live in an animal shelter. One dog in particular finally got his lucky break after over 700 days in the pen!

“Drools” is a 4-year-old male pit bull-boxer mix that spent a whopping 729 days in the slammer of Conour Animal Shelter-Upper Rio Grande Animal Society in Monte Vista, Colorado. His dark days finally came to an end once a mutual decision was made between the shelter and the Relay For Rescue founder, Kacey Widetich, was made.

Relay For Rescue is a non-profit animal welfare organization that has a mission to significantly slash pet overpopulation as well as to lower animal suffering across the globe.

Drools was going to need a lot of patience to help him get comfortable with his setting.

Widetich stepped up and knew she had to do everything in her ability to help Drools accept those around him. She set out with the intention of making Drools a lovable dog and have those who adopt him to understand his special requirements.

For the most part, Drools was accepting of most other humans, but he did not do very well around other animals.

He had issues with attention and always asserted his dominance when he realized he wasn’t the only pet in the area. The adorable pit needed someone who would be willing to be extra patient with him so he could develop and train to be the best version of himself.

To help folks out, Widetich posted a video to social media detailing the rules for Drool’s future adopted family.

It was pure coincidence how it all began according to the manager of the shelter, Stevie.

Drools’s story has captured many hearts in social media, including new owner Josh Simpson who said his story inspired him.

He was traveling from Dallas, Texas back home to Boulder, Colorado when he stumbled on Drools on Facebook and decided immediately he wanted to adopt him. In a heartbeat, Simpson sent a message and a phone call to the shelter and was able to arrange for him to meet the lovable pooch.

On October 28th, the two met for the first time and it was quite interesting, to say the least. Drools was a bit nervous and shy to get close, but after a few belly rubs and cuddles, the two quickly became instant best buds.

Due to Drools’s special needs, the shelter had to arrange a second meet-and-greet on November 4th

This was in order to make sure that the two maintained a strong friendship. Simpson had been aware of this policy and knew this is what needed to be done to meet Drools’s special requirements.

In fact, he was very grateful to the shelter for accommodating these restrictions for Drools. He even wrote the shelter a touching message letting them know how much he appreciated what they’ve done for the sweet dog.

Simpson didn’t want to get his hopes up, but also hinted at picking the name “Monty” as the dog’s new name. The shelter reciprocated by sending Drools and Simpson off with donated toys, beds, and treats. “I feel like I won the lottery,” said Simpson.

“We were able to establish relationships with several rescues across the country to help move longtime dogs out of the shelter and into foster homes,” Widetich told KRDO. “All of these dogs deserve a second chance at happily ever after just like Drools and I look forward to working with the shelter to ensure this continues to happen moving forward.”

Josh and Drools seem to have been nothing short of perfect for each other.

It’s also comforting for the shelter to know the pup will be in great hands and that they no longer have to worry too much. The nearly two-year shelter streak finally comes to an end- and this doggo will no doubt see brighter tomorrows.

Jonathan Arrastia resides in Miami, Florida. He is a contributing writer for Shareably and enjoys walks, playing basketball, and creating art projects.