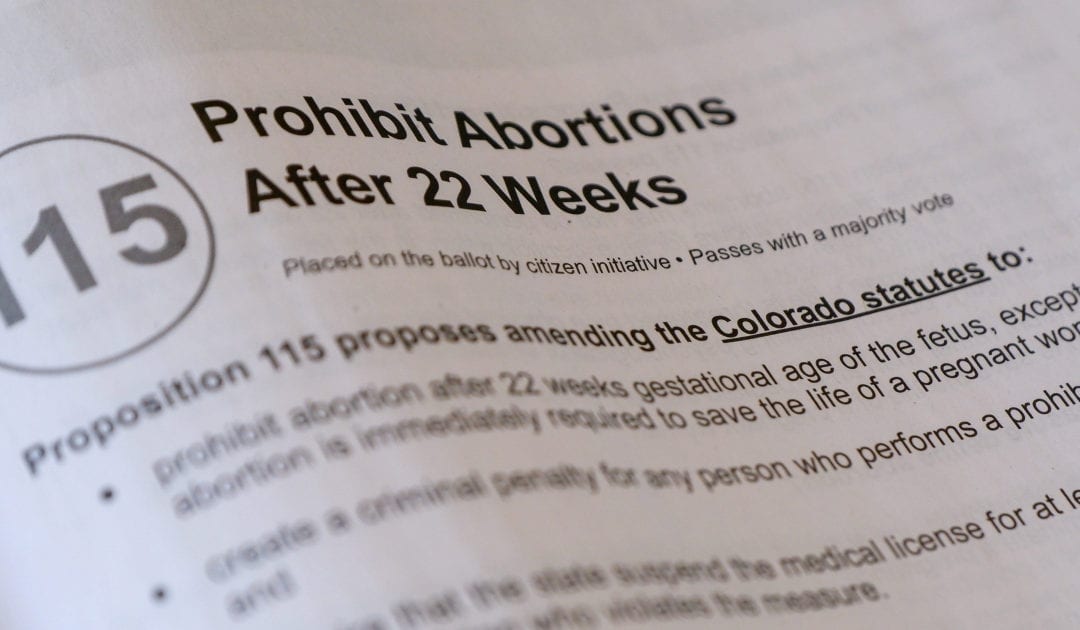 Opponents of a ballot measure that would ban abortion in Colorado after 22 weeks of pregnancy, except in cases where the mother’s life is at risk, have raised $8.7 million — about 14 times as much as the groups pushing the initiative.

And leading up to Election Day, the limited polling data available suggests Proposition 115 is too close to call.

In the final days, supporters of Proposition 115 are focusing on unaffiliated voters who haven’t yet cast a ballot, while opponents said they were fighting against misinformation and what they consider confusing ballot language.

The campaigns point to two polls conducted in recent weeks that showed the race at a statistical dead-heat, and neither side is surprised by the tight margin.

While national polling for decades has found that the majority of voters support abortion rights, that gap narrows when it comes to abortion later in pregnancy, with Americans pretty evenly split on that question. Coloradans have soundly rejected three previous ballot measures since 2008 that asked them to define “personhood” as the “beginning of biological development of a human being,” or define fetuses as people under the Colorado criminal code.

But Proposition 115 asks voters to ban abortion after 22 weeks of gestation, the point at which proponents of the measure say a fetus could survive outside the womb. Some doctors, though, say viability is 24 weeks. The measure allows only one exception: when the life of the mother is in imminent danger.

There are no exceptions for cases where the baby would not survive because of fetal abnormalities or when the mother’s health is endangered. The measure would make it a misdemeanor for doctors to perform abortions after 22 weeks.

The fact that polling is this close “demonstrates that Coloradans support reasonable and moderate abortion policy,” said Nicole Hunt, co-founder of the Coalition to Help Moms and Save Babies. “They’re not interested in Colorado being a travel destination for late-term abortions.”

Colorado is one of seven states with no time limit on when a woman can get an abortion, and women travel from several states and countries to get abortions in Colorado each year. There were between 200 and 300 abortions in Colorado that occured after 22 weeks of pregnancy in most of the last few years, according to state health department statistics.

Opponents of the proposed abortion proposal said they’ve spent the campaign battling myths and misinformation, including claims that women are traveling to Colorado to get so-called “birthday abortions” to end pregnancies just before their due dates.

“People don’t walk into a hospital at 38 weeks and ask for an abortion,” said Dr. Rebecca Cohen, a Denver-area doctor who provides abortion care. “It does not happen. And no one is forced to have an abortion or provide abortion care. A physician is never obligated to do what someone is demanding and it is not something that they would do.”

Instead, Cohen said, women seek abortions after 22 weeks most often because they find out at a 20-week scan that their fetus has life-threatening problems or because their own health problems grow more severe as their pregnancy continues.

Women could develop preeclampsia, high blood pressure or maternal seizure disorder, or their pre-existing conditions such as heart or lung diseases could worsen, she said. Abortions in later pregnancy happen after deliberate discussion and counseling with doctors to explore all the options, she said.

“Late-term” abortion is not a medical term but a political one, Cohen said. “An abortion at term for a healthy pregnancy is not the right option and not something that is done,” she said.

The measure, she said, would put doctors in the difficult position of deciding whether a woman needed an abortion because her life was in danger — which would be allowed — or whether her health was at risk — which would not be allowed.

The ballot measure bans abortions after 22 weeks “except when the abortion is immediately required to save the life of the pregnant woman or when her life is physically threatened, but not solely by psychological or emotional condition.” That last part means that women could not seek an abortion after 22 weeks because they did not feel mentally stable enough to have a baby.

Hunt, a supporter whose daughter was born at 27 weeks, said that in cases of a lethal fetal diagnosis, there are better options than abortion. Alternatives, such as prenatal hospice programs, help women “celebrate and mourn the passing of a loved and wanted child.”

“They can provide comfort to a family during pregnancy,” said Hunt, who volunteers for a crisis pregnancy center. “There is closure.”

Abortion Access for All has raised $8.7 million to try to defeat the abortion ban proposal, including many large and small donations from across the country. Meanwhile, four groups supporting the abortion ban have raised a combined $609,000, according to campaign finance records. Those are the Coalition to Help Moms and Save Babies, the Coalition for Women and Children, Alliance for Life and National Right to Life.

“While we might not have as much money to spend, the amount of hours, the amount of engagement … There is a lot of momentum that is quiet,” Hunt said. “It’s grassroots level.”

She said it feels different this time around, compared to prior abortion ballot measures in Colorado. “This is not a personhood bill,” Hunt said. “The proponents are afraid that they are going to lose. If they lose Colorado on this ballot measure, that is something that they will find as a big setback to their agenda.”

The opponents received a boost in funding after the death of U.S. Supreme Court Justice Ruth Bader Ginsburg, an abortion rights proponent, and again this week when her replacement, Amy Coney Barrett, was confirmed, said Stefanie Clarke, a spokeswoman for the “Vote No on 115” campaign.

“The amount of money just underscores how important this is and the ramifications that this measure, if passed, would have on a national level,” she said.

The “Vote No on 115” volunteers have been working phone and text banks every day to combat the “intentionally confusing” measure, Clarke said.

“Nobody is at 20-plus weeks whimsically saying, ‘I just don’t want this baby,’” she said. “These are serious, agonizing, complicated issues.”

A University of Colorado poll found only slight gender differences in polling on Proposition 115, with men and women pretty evenly split on the measure. This is despite other races that showed big gender gaps, including the presidential race where Colorado women were more likely to favor former Vice President Joe Biden, said Anand Sokhey, an associate professor of political science who worked on the survey.

On the abortion-ban proposal, partisianship was a much larger factor than gender with a majority of Democrats surveyed against the ban and a majority of Republicans in favor, he said.