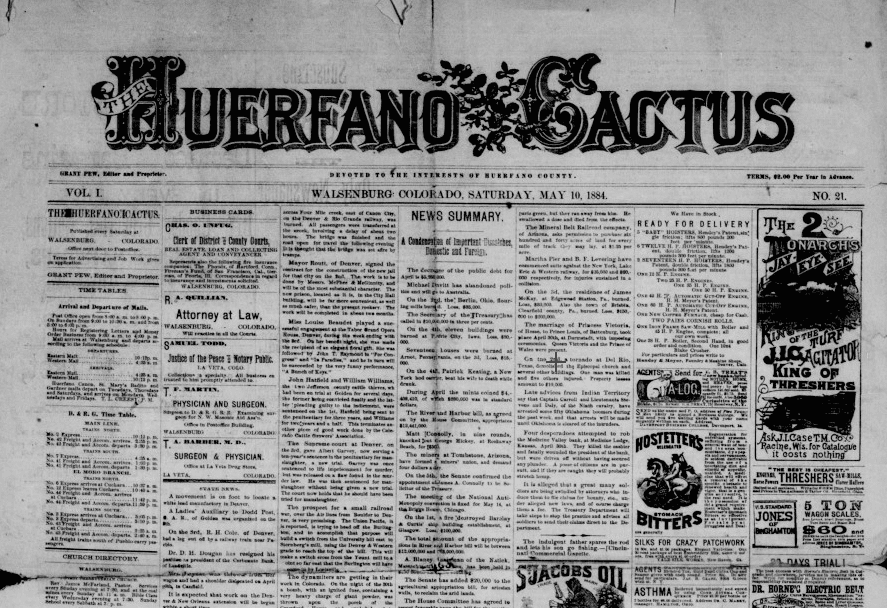 It’s no secret that the Colorado Historic Newspapers Collection (CHNC) is a gold mine for regional news; in fact, the collection is largely made up of smaller local newspapers from all over the state. Regional history reflects national and world history. Knitting together the histories of specific localities, and including their unique perspectives, adds to the tapestry of our collective human story, and we believe every thread counts equally. We are excited that—thanks to the Huerfano County Historical Society—CHNC now includes a cluster of historic publications from Huerfano County: the , , , , , , and the .  In this month’s ‘Window To History,’ we’re delving into some of these publications and sharing a few things that pop out.

Let’s start with something creepy from the May 22, 1933 edition of the World Independent.

Now that’s the sort of headline that makes you keep reading. What happened is this.

Police continue their search for a woman, half-clad and accompanied by a nude man, attempted to abduct Betty Lee O’Dell, eight, from her bed early this morning.

Grabbing the girl by the neck and muffling her cries with one hand the weird assailant, described by Betty as having long black hair falling to her waist, dragged the little girl thru the back door of the home of her parents, Mr. and Mrs. R. L. O’Dell, to the backyard where the naked man stood waiting. Sudden screams of the girl’s brother, Elwood, 14, who witnessed the attempted abduction, caused the strange couple to drop Betty and flee. Except for another small girl, a friend of Betty, and a seven months’ old baby, the children were alone, in the house while the parents attended a party.

Officers were summoned by neighbors who heard the boy scream. In the back yard they found several barefoot marks.

I told you it was creepy.

The Huerfano Cactus May 10, 1884 issue is beautifully aged, as all old newspapers should be, complete with the ornate masthead font appropriate for the time.

On page 2 of this issue, a description of the county is given (“Huerfano county lies in the southern part of the State, its extreme southern point not being over twenty-five miles from the northern boundary line of New Mexico; covers an area of about 1,200 square miles, and is inhabited by about 6,000 people…”), as well as its origins, and its potential for great mining riches and opportunities for land ownership and farming. What is really being spoken about is building upon what was then a relatively recent development: the Western Expansion and subsequent settlements. The newspaper, like many western newspapers of the time, tries to entice white easterners into going west, with almost a guarantee of success.

The principal industries of the county, at present, are agricultural and pastoral, but its mineral deposits, when duly developed promise to place it in a few years, among the best mining counties in the State.

This statement came true, as demand for coal increased (and there was a “munificent abundance in Huerfano county”) culminating in World War II, after which the coal boom in the county ended.

When looking at old newspapers, it is common to happen upon sentiments which would not be as readily printed nowadays. The following nevertheless provides insight into the common attitudes of the white settlers of the time, reflecting the huge national changes that were impacting the country on a local level.

There is not enough attention paid to agricultural pursuits by the Mexican population, constituting about one-half of the population, and who own most of the rich soil, to make it remunerative to them. If, in their primitive way, they raise enough for home consumption, they are content. The white farming population is too small, so that hay and potatoes are about the only produce exported.

What a wonderful change would take place by the immigration of farmers from the East to take the place of Mexicans. With their customary hard work and judicious management, they would soon elevate the county to the rank it so richly deserves among the agricultural counties of the State.

Huerfano County News from 1951 includes an article entitled ‘Psychiatrist Wages Battle For Health Of The Mind.’ The article states of the then-burgeoning field:

No branch of medicine is so hampered by superstition so festooned with wild and tall tales and so bogged by prejudice as is psychiatry, the science which is making an heroic effort to treat man’s mental and nervous disorders.

The source of these disorders partly due to how “the pace of modern living is throwing extra burdens on the mind, nervous system, personality.” The article reflects on progress that was made post WWII, both in the field and the evolution in the culture’s understanding of mental health.

Even more important is the gradually growing understanding by society that mental illness is no more “unclean” or “disgraceful” than mumps or a broken leg, even if it is more complex. The concept of Bedlam is giving way. We no longer chain our mentally ill in dungeons, and we are beginning to understand that all mental patients are not “lunatics.”

A handy tidbit of information for the confused (me):

A psychiatrist and psychologist are not the same thing, although both deal in different ways with human behavior. The psychologist, who is not an M. D., usually deals with statistical averages, man in the mass.

After some general advice about “mental hygiene,” the article ends with this, which certainly rhymes with our current times:

And, by the way, how long since your family—Mom, Dad, the kids, maybe Grandma and Grandpop—all got together and did something —together? The decline of the modern family as a cohesive group is one of the most disruptive forces in our society, mentally as well as morally and socially.

Let me leave you with one of my favorite things about older newspapers: the random pieces of fiction which would appear in among the news of the day. For this we turn to the Walsenburg Cactus‘ February 25, 1897 edition and for the short story ‘A Strange Wooing’. And strange, it is. It begins thus:

I AM Casper Athwold. I was born beautiful, but one day a nurse dropped me from her arms down the whole length of the oak staircase. There is no need to say more. Yet I was a happy child.

Contact at peever_m@cde.state.co.us
Latest posts by Michael Peever (see all)