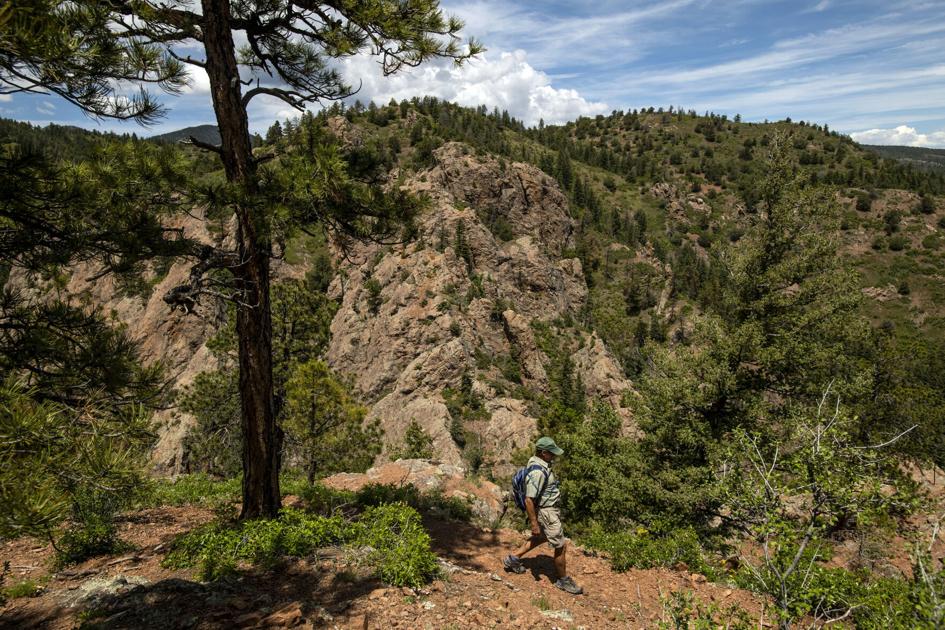 BEULAH • Colorado 78 runs west of Pueblo through open ranch land that is like a sea dividing nations. Sudden, rugged bluffs rise and fall across pastures. The distance from that industrious city to this nostalgic mountain town is about 25 miles, but it seems much farther.

Beulah is a name with biblical meaning, a reference to heaven. And heaven is how people here know their home of woods and meadows, where horses and deer occupy front yards, and where the only sound is commonly crickets and birds.

Signs lead the way to another surprise: Pueblo Mountain Park.

“I had no idea this was here,” I said to the man who recently met me at the entrance, Dave Van Manen.

That’s something he reflects on a little later, when we arrive to an overlook showcasing the valley and the sky beyond, the granite face of Devil’s Canyon below, and the rolling slopes of San Isabel National Forest all around. A trail weaved through fragrant forests and ridges above 7,000 feet, where wildflowers danced in the breeze. We saw no one else along the way.

“I would venture to say 95% of people who live in Pueblo don’t know this exists,” Van Manen said atop a rocky precipice. “And they own it! This is theirs!”

Pueblo Mountain Park’s 611 acres entered the city’s trust in 1920. It was to be a popular retreat for a population that boomed with the steel mill and the automobile.

Over the next decade, dirt roads would be widened for those Model Ts, leading to picnic sites, a rodeo arena, a tennis court and other amenities still seen today, rusted and crumbling. The pavilion and high-rise stands of the now-overgrown baseball field each match the unmistakable stone work of Franklin D. Roosevelt’s Civilian Conservation Corps.

The city’s purchase of the park coincided with a momentous occasion in the history of the U.S. Forest Service.

Adjacent to Pueblo Mountain Park along Squirrel Creek, a young man by the name of Arthur Carhart led the construction of a campground. Carhart is better known for inspiring the Wilderness Act. But also in 1919, he drew up a 54-page blueprint for this area that is widely considered the inspiration for modern recreation planning.

At the time, lumbering and grazing were the prevailing ideas for public lands. It was a radical idea, recreation. But on the heels of a world war and global pandemic, Carhart observed: “Perhaps the rebuilding of the body and spirit is the greatest service derivable from our forests.”

One hundred years later here, it seems the ideal is lost on the masses due east.

“We have the best trails in southern Colorado,” said Pueblo Mountain Park’s resident caretaker, Tracy Pemberton. “Just 30 miles west of Pueblo, and you’re in a whole other world. You’re in total nature. But people don’t realize what we have here.”

Unlike Van Manen, who enthusiastically obliged to show me around the park for this story — “I’m good with the park getting the publicity,” he said — I sensed an uneasiness in Bruestle.

But he agreed with Van Manen and Pemberton: “This park is definitely underutilized,” he said.

While retired, Van Manen continues to sing the praises of the park and the nonprofit that manages it, Pueblo-based Nature and Wildlife Discovery Center.

Van Manen is the park’s foremost champion. This is the place of his life’s proudest work.

He and his wife were singing around America, roaming in a van, when they settled in Beulah in 1976. Van Manen considered himself an “Earth musician,” singing songs of nature. He continued that career until the late ‘90s, when he founded the Mountain Park Environmental Center.

“My idea was to get more kids outside,” he said, “with the hope that maybe they’d grow up and become advocates for the natural world.”

Pueblo Mountain Park would be his classroom, a perfect, diverse lab in the plains and montane “transition” zone. He’d guide kids on trails, stopping to name plants and trees and birds and the larger mammals that lurked seen or unseen. He explained how everything in nature was connected. “So (kids) would have an association with their non-human neighbors,” he said.

They’d come by busloads from Pueblo. They formed crowds Pueblo Mountain Park had not seen since well before the ‘80s, when the steel market collapsed.

But under the cash-strapped Pueblo government, he watched the park fall deeper into disrepair. He heard the city was looking to liquidate the land. That’s when he offered himself and his nonprofit to manage it.

“They looked at me like I was nuts,” Van Manen recalled. “Like, you really wanna do full moon hikes? Who wants to do that?”

But those proved popular for a while, thanks to his marketing savvy from the music business. He’d go up the trail with guitar in hand, singing songs of James Taylor and John Denver, and his audience would listen and sing along those nights under the silvery glow.

The nonprofit management model has been in place since 2008. Improvements have been made since then, including to the lodge that is rented by groups on retreat. This and revenue from special events at the pavilion help Nature and Wildlife Discovery Center maintain the park.

Inspirational quotes are scrawled on the walls.

Goes another: “The Earth has music for those who listen.”

It’s not Van Manen playing the music anymore. Those full moon hikes ended somewhere on his way to retirement.

“I still every now and then will bring my guitar up here,” he said on the trail. “To play for myself and the birds.”