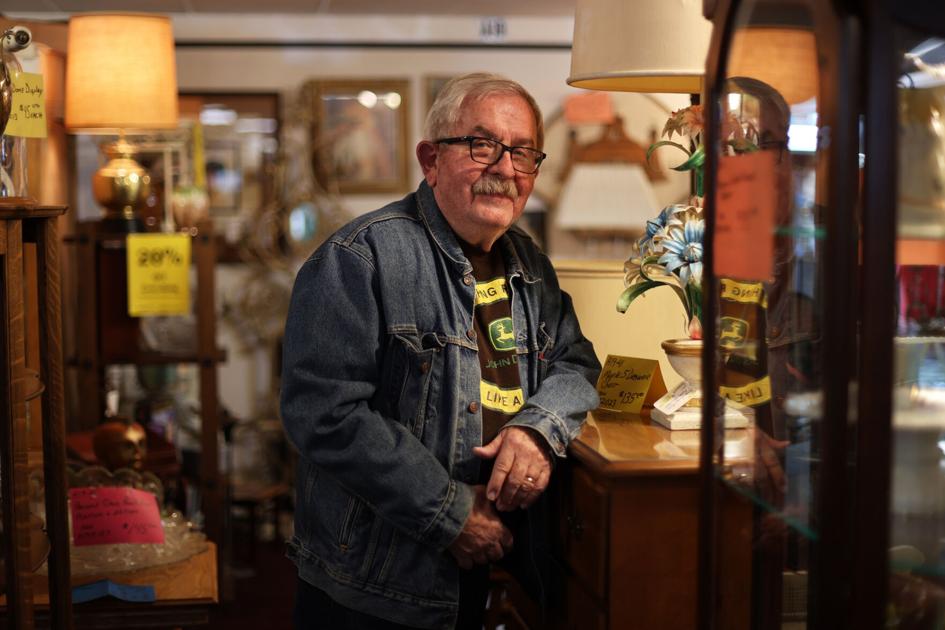 A gray block of a building occupies a corner of eastern Colorado Springs, neighbored by a Chinese restaurant, gas station and power plant. Unremarkable on the outside.

But on the inside …

“It’s like an eccentric picker’s paradise,” says Colin Thompson, one of some 400 vendors here at American Classics Marketplace.

It used to be a furniture warehouse. Now it’s a whimsical wonderland of antiques, overseen by characters like Thompson, who calls himself Medicine Man. He’s of Native American descent. He wears brown leather and turquoise, and here at his booth, he sells jewelry, knives and art celebrating his people.

The next booth over you’ll find Rusty Randy, who scavenges old farms and ranches. Plenty of decayed equipment-turned-decor here, along with saddles and wagon wheels.

And nearby there’s a Wurlitzer jukebox and an old parking meter and slot machine. Farther on, there’s a vast collection of license plates and another of leather-bound books. Typewriters here, vintage sewing machines there. Vinyl records, cowboy hats, crystals.

“I’m the bottle freak,” says Manfred Bjork, whose collection ranges in the thousands: bottles of whiskey, soda and poison, many from the dirt where they were left centuries ago. Bottles colored purple, blue, red, green — shined and for sale.

“I believe I really used to live in the 1890s, because that’s what most of this stuff is,” Bjork says.

An antique poison bottle dating to the early 1900s sits on a shelf at the American Classics Marketplace.

Inside American Classics Marketplace, one indeed feels transported. The colorful world of nostalgia is all-consuming.

One is heard over the old-timey tunes: “How do people come here and not get lost?”

They weave through oddities like a dream weaves through the night.

Here’s a case of butterfly specimens. Here’s a mummified bat. Some sports memorabilia. Some German steins. A pair of wooden skis. A classic guitar. An Edison phonograph. “It works!” reads the tag.

“Out of this world!” reads the label of another collection, displaying shards of meteorite. Another displays the money of the world. The booth called “Once Upon A Time” is alive with ticking, clicking, chiming clocks.

“My mother used to have this pressure cooker,” recalls one wandering shopper. Others make similar remarks of years gone by.

“I tell people if we don’t have a million unique items in here, it’s gotta be really, really close,” says the marketplace’s owner, Gary Brookshire.

Gary Brookshire, a managing partner at the American Classics Marketplace on Academy Boulevard, sits down for a video interview at the break room at the warehouse. Brookshire has been running the business for 10 years now. (Forrest Czarnecki/The Gazette)

At 65,000 square feet, he also tells people this is the biggest showroom of antiques in all of Colorado. The Springs’ Willowstone Antique Marketplace claims 75,000 square feet; the discrepancy, Brookshire says, has to do with space committed to vintage and collectible items, rather than material found at Willowstone’s large auction and garage sale sections.

At any rate, American Classics is the city’s longest-going antique store of this size, having grown its inventory and reputation over 20 years.

The parking lot fills over the weekends with regulars returning for whatever new treasures may have emerged. Dull, rainy afternoons suddenly become bright and curious. Grandparents are found with their grandchildren, showing their history.

“A walk down memory lane,” Brookshire calls it.

This he discovered when he took ownership a decade ago. He had no sentimental attachment to antiques. No interest whatsoever. He was a hardened retail man, his latest stop being in auto parts.

“You know, when people go into an auto parts store, they aren’t super happy to be there, because their car’s broke,” Brookshire says. “But when I came in here … they were playing ‘60s music, people were dancing in the aisles, the front counter was just packed with people buying stuff. It’s just fun to be in the store.”

Which is why Candace Covnot has sold here for as long as the marketplace has been around. She’s known as Big Bird. Her booth is Robyn’s Nest of Colorado, named after her daughter.

“I started this when she was still in my arms,” Covnot says.

And Covnot was in her mother’s arms when her mother was antiquing. Covnot remembers scrounging around garage sales.

At the moment, she’s loving the furniture in Shana Schaffer’s booth. Schaffer upcycles furniture, taking discarded chests of drawers and tables and transforming them into something resembling high European society.

“Of course, I want to keep everything,” Schaffer says.

They do, in part, because they know old stuff to be the stuff that lasts. Durable, storied. Not the stuff of Walmart and IKEA, mass-produced to sell low and stack landfills.

Analysts know trends to be cyclical, which is why some predict antiques someday hitting the mainstream. That’s especially considering the conscious buyer movement, defined by a corporate-averse, climate-aware generation preferring reusables.

Brookshire has noticed it. Some vendors here say they are seeing more customers than ever.