A Guide to Boulder, Colorado: A Hub for Hikers, Artists, and Foodies 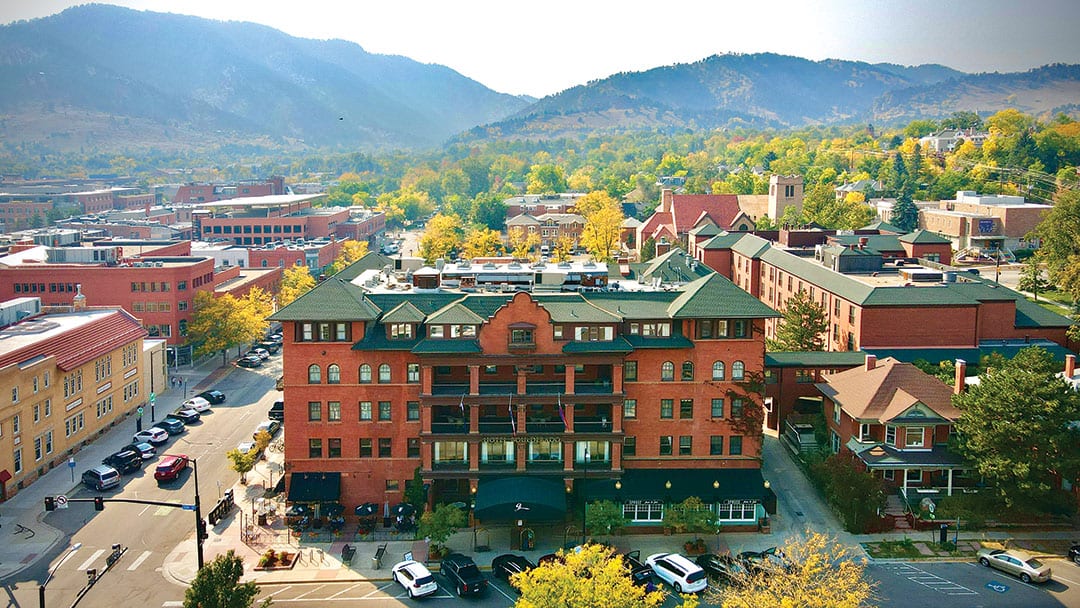 When Garry Marshall selected Boulder as the setting for his quirky 1970s sitcom “Mork & Mindy,” starring an unknown Robin Williams, it had nothing to do with the Rocky Mountains or historic architecture. The town was cast because Marshall’s niece attended school there. That nonchalant decision catapulted Boulder from small town to small-screen stardom. These days, Boulder is a hub for hikers, intellectuals, artists, students, progressives, and foodies. No wonder National Geographic named the city the Happiest Place in the U.S.

HISTORIC DIGS
When the Hotel Boulderado opened on New Year’s Day 1909, Teddy Roosevelt occupied the White House and Mary Pickford made her screen debut. While the hotel has one foot in the elegance of a bygone era, it effortlessly bridges the past and present by offering modern amenities. The Italian Renaissance retreat features an iconic stained-glass canopy ceiling, a cantilevered cherry wood staircase, and the original 1906 Otis elevator still in use. Slumber in a room cloaked in Victorian elegance or opt for the chambers with contemporary furnishings ($290 and up).

PEARL JAM
A visit to bustling Pearl Street Mall feels slightly familiar—think a more urban Downtown Disney without Mickey and Minnie. This pedestrian-only destination in the heart of downtown stretches four blocks and is lined with stores, services, and restaurants punctuated by a plethora of public art, micro gardens, and splashing fountains. Bibliophiles will want to visit Boulder Book Store, a local favorite that spans three floors and is filled with tomes of classic and contemporary titles.

BIG FARM-A
The term farm-to-fork has been overused in recent years when it comes to restaurant jargon. However, in Boulder, named the Top Foodiest Town in America by the editors of Bon Appetit, the term is more than just lip service. During the summer, you can graze on the grange at a number of chef-hosted farm dinners. These rustic gatherings include meals prepared with produce harvested at the designated farm with guests seated among the crops at long wooden tables illuminated by twinkle lights. Meadow Lark Farms, which works with a dozen farms throughout the Boulder area, is one organizer of such feasts.

MOUNTAIN ELEGANCE
With airbrushed views of the Flatiron Mountains coupled with full-service convenience, St Julien Hotel & Spa looks as fresh today as it did when it opened in 2005. From the lobby, with its cool marble and rich wood appointments, to the plush rooms and suites, no detail has been left to chance. Neutral hues, modern amenities, and contemporary decor add to the understated elegance at this upscale retreat ($500 and up). Everything needed is housed beneath the hotel’s roof—pampering, feasting, sipping. With downtown through one exit and Boulder Creek Path through another, it’s up to you whether to wear heels or hiking boots.

SPILL SOME TEA
The Boulder Dushanbe Teahouse is a symbol of global friendship and cultural exchange with sister city Dushanbe in Tajikistan. More than three dozen artisans from several Tajikistan cities contributed to the decorative details and elements that grace this iconic and hue-popping building, from the hand-painted ceilings and tables to the imposing columns and exterior panels. Starched lines and refined touches set the stage for a traditional afternoon ritual with freshly baked cakes, scones, crustless sandwiches, and a range of steeped teas.

A FAMOUS SINK
Boulder is made up of lots of wonderful neighborhoods, including The Hill where the University of Colorado is situated. Like most college towns, this particular neighborhood is filled with trendy cafes, coffeehouses, boutiques, and bookstores. One such place is The Sink, a popular cafe where a young Robert Redford once worked as a busboy and where President Barack Obama made an impromptu visit in 2012 to have a signature Sinkza pizza, which the owners have since renamed the POTUS Pie.

Through Aug. 15: The Colorado Shakespeare Festival explores the Bard’s influence through an array of productions, education, and engagement. Performances take place at the historic Mary Rippon Outdoor Theatre.