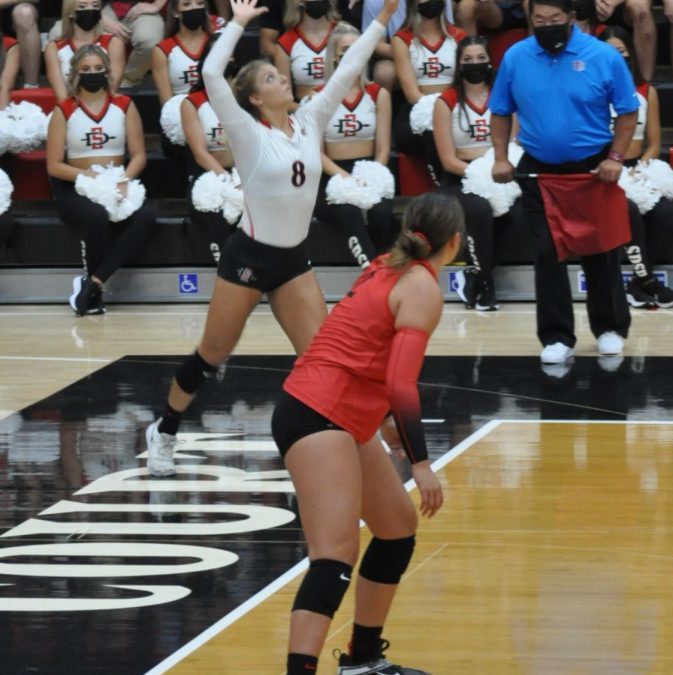 As the midway point of the Mountain West Conference finals approaches, San Diego State’s women’s volleyball underwent another loss at home. The Aztecs (6-15, 3-6 Mountain West Conference) faced the first-place Colorado State Rams (12-6, 8-1 MWC). It was a dramatic battle between the two teams, with the Aztecs taking the first two sets 28-26 and 25-22, but dropping the final three 22-25, 14-25, and 13-15.

Thursday night, the Scarlet and Black were backed with spirit and pep as SDSU’s band, cheerleaders, and dance team fully displayed their talents between plays.

San Diego was giving Colorado the most they could handle, as set three is when the Rams fought back. Set three consisted of eight ties and three lead changes while set four consisted of two ties and two lead changes. Missed critical serves and inaccurate plays led CSU to tie the game 2-2.

Time was taken out of set four as San Diego State’s junior setter Ashley Vanderpan suffered a cut to the chin and had to be medically assisted.

Set five was a nail-biting moment with 10 ties and two lead changes, keeping it close before the win was taken over by CSU.

Overall, senior Zoi Faki was a “killer beast” as she contributed 74 kills in the entire game. Senior Victoria O’Sullivan came in second with kills, contributing 46 of them.

O’Sullivan was named Mountain West Conference offensive player of the week for her recent performances against Boise and Utah State.

“I was really excited”, O’Sullivan said when asked how she felt about this- “It was my first time getting this honor. It was really exciting my senior year to finally get that.”

“She works hard, she is a great athlete, and is just a tremendous player offensively”, -head coach Billard said.

Both O’Sullivan and Hillard agreed the team has been playing better at away games than at home.

“We play the same way in other gyms”, O’Sullivan said. “We need to bring that same energy to homecourt.”

SDSU’s next home game is Thursday, Oct. 28 at the Peterson gym against Utah State.