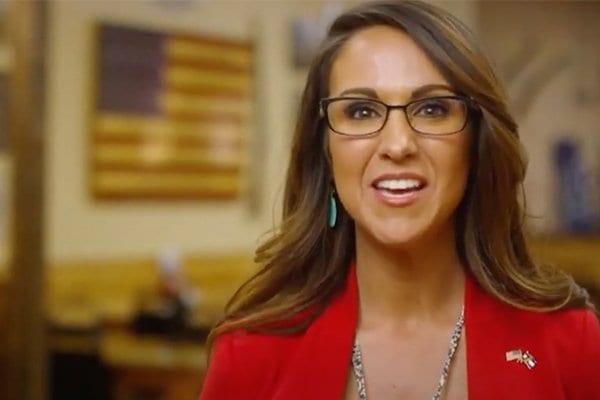 WASHINGTON, DC – A newly elected congresswoman from Colorado allegedly wants to be able to carry her concealed firearm while working on Capitol Hill. And, much to the dismay of her liberal counterparts, she may be allowed to do.

Newly elected Republican lawmaker, Lauren Boebert, allegedly requested the ability to carry her firearm on her person while she is working as a Congresswoman.   Boebert, who owns a restaurant with a firearm theme in Colorado, would not be the only lawmaker legally allowed to carry if her request is approved by the Capitol Police.

Boebert, who upset five-term incumbent Scott Tipton in June, is a hardcore second amendment advocate and is known to carry a Glock on her side. Boebert is believed to have won in part because she accused Tipton of not supporting President Trump enough.

Biden intends to raise $34 billion in tax revenue through taxes on guns.

The Second Amendment should never be taxed.

Two unnamed congressional officials, one a Republican and one a Democrat, reported that Boebert had asked officials if she could carry her firearm while at an orientation for newly elected law makers.

While Boebert’s team did not acknowledge whether or not she really did ask permission to carry her firearm, Laura Carno, an aide for Boebert, said:

“This was a private conversation and inquiry about what the rules are, and as a result the Congresswoman-Elect won’t be going on the record.”

In other words, Boebert, or at least her team, does not believe that it is anyone’s business whether or not she carries a firearm while federal property.  Although, it can easily be assumed that she will be, given her stance on gun control and coming from a conservative area of Colorado.

The Capitol Police did not acknowledge whether or not Boebert or any of her representatives requested permission for her to carry a firearm on Capitol Hill. They also, in the past, have refused to answer how many lawmakers carry firearms in their official capacity.

Regardless of who carries firearms on Capitol Hill, they are legally allowed to do so according to a regulation passed in 1967.

The regulation states that no law, whether federal or from the District of Columbia, “shall prohibit any Member of Congress from maintaining firearms within the confines of his office [or] from transporting within Capitol grounds firearms unloaded and securely wrapped.”

The violent crime rate in Washington DC is 158% higher than the national average.

Look at how they treated Rand Paul on the streets & now won’t even investigate who assaulted him.

As a five foot tall woman, yes, I want to carry and it’s my right.

This mandate, while allowing lawmakers to have firearms in certain conditions, does ban them from carrying them into the House Chamber or other restricted areas on Capitol Hill. But that does not prohibit their aides from holding onto the lawmaker’s firearms while they are in the prohibited areas.

However, Democratic lawmaker Jared Huffman, from California, believes that the practice should be stopped, especially after civil unrest that has occurred after the death of George Floyd in May of this year.

He is upset that lawmakers can keep firearms in their offices and work around the rules in allowing their aides to hold onto their firearms while they are in the House and other restricted areas. Huffman said:

“Members could have a loaded AK-47 sitting on their desk and no one would ever do anything about it.”

However, Republican Representative Thomas Massie, believes that the regulation is fine as is, and is also necessary. To add evidence to his argument, Massie pointed out the mass shooting of Republican lawmakers in 2017 while they attended a baseball practice in Alexandria, Virginia. Massie said:

“As soon as you leave the Capitol property, you are a target.”

Another person who supports lawmakers, and specifically Boebert, in carrying firearms, newly elected lawmaker Republican Marjorie Taylor Greene, says that all lawmakers and Americans should be able to carry a firearm to protect themselves. She said:

Not only do I support members of Congress carrying a firearm, I believe every American has the right. I will work every day to end ALL gun free zones.”

As anarchy breaks out across the United States, is it time for national concealed carry?

WASHINGTON D.C. – As our nation falls into chaos, with criminals becoming emboldened as politicians across the country have jumped on the anti-police bandwagon, more people than ever before are starting to feel that the police cannot protect them.

This is through no fault of their own, as police officers have seen themselves charged criminally for doing their job, as happened this past week in Atlanta.

Police are also being overwhelmed by the unadulterated anarchy taking place on the streets in particular in our big cities.

Firearms sales had already started to surge due to the coronavirus pandemic, with reporting that more than 3.7 million firearms checks were conducted through the National Instant Criminal Background Check System, which is administered by the FBI in the month of March.

This number represented the highest number in over 20 years, and represented an increase of 80% over the same time period last year.

In fact, FBI data said the week of March 16, nearly 1.2 million background checks for firearms  purchase were conducted, which blew past all previous records going back 22 years to 1998.

Fast forward to this past month.

According to Fox News, gun sales spiked in May by more than 80% year to year compared to 2019, which correlates not only to the coronavirus pandemic but to the overwhelming civil unrest across the country.

Unlike the March report on background checks, the May report was specific to gun sales. Fox said that approximately 1,726,053 guns were sold in May—an increase of 80.2 percent over last May, according to data released by Small Arms Analytics & Forecasting, which examines raw data from the FBI’s NICS.

Similar increases were reported in April as well, when data estimated a 71.3 percent increase versus last April.

Way back in February, 2017, Rep. Richard Hudson (R-NC) introduced a bill that would provide national reciprocity. The legislation would have made concealed carry licenses valid across state lines much the same way as driver’s licenses are valid across the country.

According to AWR Hawkins writing for Breitbart News, national reciprocity makes sense. Hudson’s bill was passed in December, 2017, however the Republican-controlled Senate let it languish.

There may be a shot at gaining the legislation this year, as anarchy and chaos reigning across the United States has gotten the attention of more people. Hawkins notes that President Trump said a year or so prior to his presidential run that he was in favor of such a law.

had reported in September 2015 that he believed concealed carry should be treated like driver’s licenses and recognized throughout the country.

At the time, Trump said:

“The right of self-defense doesn’t stop at the end of your driveway. That’s why I have a concealed carry permit and why tens of millions of Americans do too.

One person who responded to the Breitbart article, however did raise a good point.

He contends that if control of firearms is removed from individual states and given to the federal government, the states would never get that control back.

He contends that if the Democrats regain control of both chambers of Congress or the White House, all it would take is one bill or one executive order and concealed carry “could” be banned altogether.

As we have seen with an activist Supreme Court Chief Justice, the Second Amendment right now isn’t a guarantee. Any such bill must be approached with caution and due diligence.

In speaking to the significant increase in gun sales, Dana Loesch, radio talk show host and former spokesperson for the National Rifle Association told Fox Business that she was “not at all” surprised to hear about the surge in gun sales and believes people will be anxious to purchase firearms given the violence that has swept the nation.

“When people see the violence that they see on television—and people understand the difference between peaceful protesters and violent rioters—they see, you know, the sunset and then the fires start, and they see the assaults and the looting and the breaking and destruction of private property,” Loesch said. “So they look at this and it unnerves them, especially after we’ve all been locked up for, like, three months.”

She continued that the chances of someone’s business being looted or otherwise damaged decreases when the owners have access to firearms for protection.

“This is people’s livelihoods. For some people, their lives are over when they lose their ability to make ends meet. These aren’t rich corporation heads that are feeling the brunt of this.”

“When people see the way that law and order breaks down out of either a lack of respect just for law and order, or for an unwillingness to stop looting and rioting. They’re going to get firearms because they ultimately understand that they are their own first responder.”

The National Shooting Sports Foundation (NSSF) found that out of all the gun-buyers who entered the market recently, 40 percent were first time buyers who are “overwhelmingly purchasing handguns for personal protection.”

“The past months, and especially the events of the past week, show us that in uncertain times, law-abiding Americans will consistently choose to take responsibility for their own safety, as is their right,” said Mark Oliva, spokesman for NSSF.

“Police were already stretched thin before this wave of unrest, prisoners recently released from jails were being re-arrested for subsequent violent crimes, and the widespread destruction of personal property and assaults remind Americans that they must be their own first-responder.”

I am so honored to be the first woman and the first mom to serve the great people of Colorado’s 3rd district.

Thank you all so much for your support that got me here! pic.twitter.com/QiIi9w1AHi