A Colorado Wildfire Just Climbed Over the Rockies. In October. 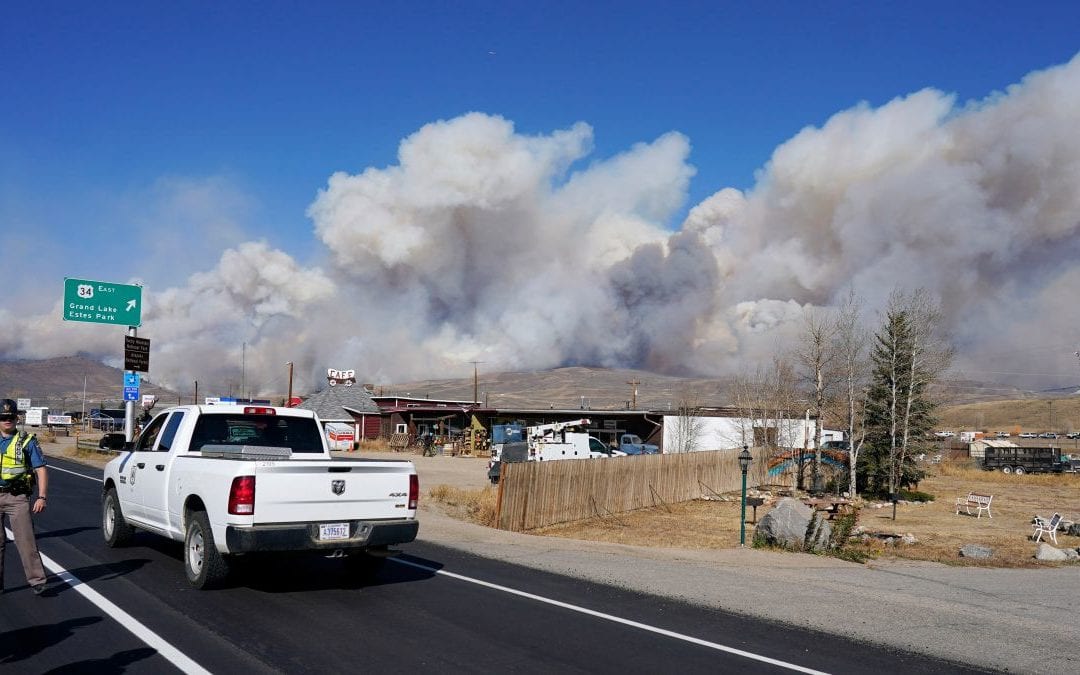 Every time you think you’ve seen it all as a climate reporter, the crisis throws something new at you. The latest point in case: the aptly-named East Troublesome Fire has traversed the continental divide in the Rocky Mountains at a time when snow is usually beginning to settle into the hinterlands.

While most eyes have been on California’s record-setting wildfire season, Colorado has also been ablaze in a bad way. The East Troublesome Fire and the Cameron Peak Fire are extremely active even by peak fire season standards, let alone what used to be the offseason. Those two fires are the first- and fourth-largest fires on record in the state, respectively. The Pine Gulch Fire, a conflagration extinguished earlier this year, was the second-largest, meaning three of the five biggest fires the state has ever seen have all lit this year.

The East Troublesome Fire, though, is perhaps the most outlandish and dangerous of these fires. The fire began on the western side of the Rockies last Wednesday and grew quickly. And it exploded on Thursday as dry, warm conditions and powerful gusts fanned it up the western flank of Rocky Mountain National Park and eventually over the continental divide. It’s hard to put into words how outlandish this type of fire behavior is.

The continental divide is a geographic feature that separates waters that flow to the Atlantic or Gulf of Mexico on one side and those that flow to the Pacific on the other. That means it’s essentially the crest of North America—in other words, it’s at high altitude, is cold, and not super conducive to catching on fire, especially at the end of October. And yet here we are, with a fire that’s only 5% contained and raging down the eastern slopes of the Rockies now.

“While October is undoubtedly still fire season in California, it is historically *not* at high elevations in Colorado—so to see so many very large and extremely intensely burning/fast-spreading fires at very high elevations this late in the season is indeed extraordinary and in many cases historically unprecedented,” Daniel Swain, a fire researcher at the University of California, Los Angeles, said in an email.

The West has been no stranger to unprecedented fire conditions recently, but this year, in particular, it feels like a roving bullseye has targeted the region. Arizona lit up in July, California had an August from hell that spawned its first gigafire in modern history, the Pacific Northwest saw entire towns burn amid a historic firestorm in September, and Colorado is now the epicenter of extreme fire conditions.

The East Troublesome Fire now threatens the town of Estes Park, a gateway to Rocky Mountain National Park where skies are darkened at midday. Smoke from it and other fires in Colorado have drifted as far away as Minnesota, where it turned the season’s first snow a sickly orange, showing the climate crisis really has no boundaries.

And make no mistake, this fire season from hell is a poster child of climate change. Federal data shows this July through September was the hottest such period ever recorded for the Four Corners region, California, and Nevada. It was also the driest. Drought conditions are currently impacting 78% of the West and 100% of Colorado. Nearly 22% of the state is in the worst stage of drought, including the area currently under assault from the East Troublesome Fire.

“I still can’t believe the extreme fire behavior (including large fire vortices) I saw on the Calwood Fire just north of Boulder on Saturday,” Swain said, referring to yet another massive Colorado fire. “It’s an indication of what antecedent record heat and dryness can do the level of vegetation moisture, and how that profoundly affects fire behavior given the right weather conditions.”

This hotter, drier present is exactly in line with climate projections for what the future holds. The entire West is staring down increasing odds of a multi-decade megadrought, the likes of which hasn’t been seen in centuries. That would mean more fires like the ones plaguing the region this year. In other words, the curveballs of this fire season could become the norm.