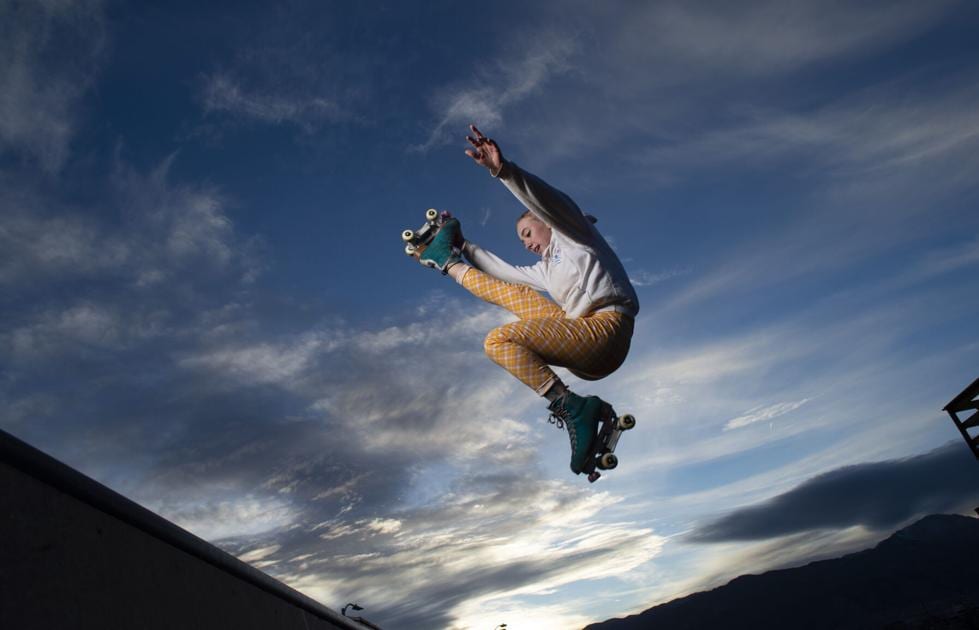 In a way, Ivey Rose saw it coming.

If you’re a serious athlete, a serious injury comes along at some point.

That doesn’t mean she was prepared for that day in March , when a trick went wrong at an indoor skate park in Colorado Springs.

Rose, a 20-year-old professional roller skater, skated up a ramp and bashed her kneecap on a cement wall while trying to flip around. A video of the moment will probably make you wince. And let out one of those “Ahhh” sounds.

In the clip, which Rose posted on her Instagram, you can see Rose instantly fall to her side, clutching her knee cap.

It was bad. And she knew it right away. She doesn’t usually cry when she gets hurt, but she cried. She remembers thinking, “I did it. I finally did it.”

“I’ve taken a lot of falls and I know how to fall,” she said. “I can tell when it’s more than a little bruise or something.”

It was way more. She shattered her patella, effectively breaking her knee bone into a few pieces, she found out at the emergency room. She also found out that months of recovery were ahead for her.

She took to Instagram, where Rose has built a following of 170,000 people and where she typically shares videos of her cool skating tricks.

She had to break the news to herself and her followers.

“I’m heartbroken, angry, and just really scared,” she wrote on Instagram next to an X-ray photo of her knee. “I truly don’t know how to function without skating in my life and it’s going to be a wild ride figuring out how to manage without it.”

That was more than three months ago, a stretch of time that’s been tough for Rose. There were weeks of not leaving the house and weeks of leaving the house only for physical therapy appointments. She’s spent days at the skate park to watch friends and get a fix of her favorite thing.

“That’s been bittersweet,” she said. “I want to be around it, but it sucks to not be able to do it. It reminds me that roller skating and that culture is still going to be there for me.”

And it reminded her of how she got here.

The Colorado Springs native was never one for traditional sports. She started playing roller derby at the age of 5, following in the steps of her mom. Her mother and teammates started a junior league for some of their daughters.

And Rose stayed with that until she turned 18, when she was supposed to join a higher-level league.

At just above 5 feet and barely 105 pounds, she worried about holding her own in the roller derby ring. So she went to a skate park alone, for the first time, to work on her roller skating.

“I instantly fell in love with it,” she said. “I realized that this is what I’d rather being doing.”

Without the rules of roller derby, Rose could move around the skate park more freely.

“And then I kind of dedicated my life to it,” she said. “If I wasn’t skating, I was still in the skating culture somehow.”

Rose spent her days at the skate park and worked at a skate shop across the street.

And she started to get noticed in the roller skating world by sharing videos of her dynamic tricks and style, complete with tattoos and colorful clothes and hair.

She got even more recognition during COVID. Instagram’s official account featured her roller skating skills. And sponsorships have poured in.

That’s why Rose is itching to get back to it.

“I’ve learned a lot during this time,” she said. “Like for one, patience is key.”

Another lesson: She can’t imagine her life without roller skating.

“It’s something I do for my enjoyment,” she said. “And I want to encourage people to go out and do something they love to do, too.”