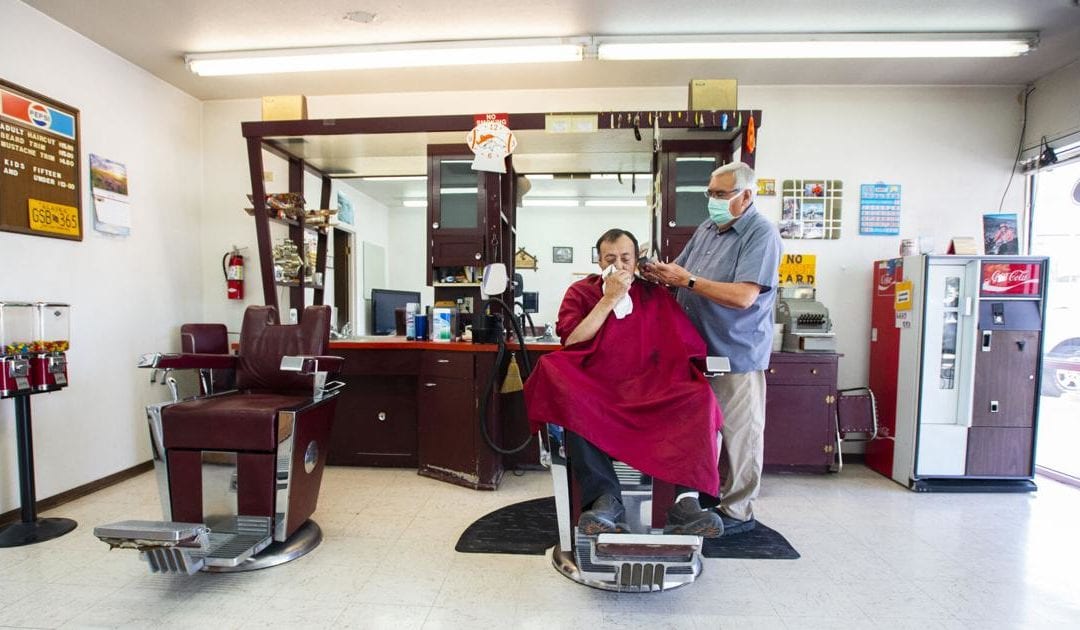 On a Tuesday in 1971, Jerry Flores called his soon-to-be-wife and said he wouldn’t be able to make it to their wedding. It was just a few days away. But Flores had just bought his barber shop and told her he’d be too busy for the ceremony.

Of course, his bride knew he we was kidding. She knew that was just one of Jerry’s jokes. And, of course, he made it to the wedding.

“He was just giving me a hard time,” Anna Mae Flores said. “He likes to tease a lot. That’s his thing.”

That’s as true now, 50 years later, as it was then. Flores spends his days behind the barber chair, effortlessly holding his clippers and holding his own with whatever banter comes up.

One look around in the sparsely decorated shop tells you Flores, 72, is a Broncos fan. There’s the Broncos clock and the Broncos case on his iPhone. So there are jokes about any other team. Like when a customer offered Flores a Raiders hat and he said, “Sure, leave it here. I could use something to dust off my shoes with.”

He jokes with longtime regulars like Laramie Martinez, who had his first haircut here as a baby. As the story goes, three family members had to hold little Laramie down while Flores carefully trimmed the 1-year-old’s hair. Forty-six years later, Flores jokes that Laramie “still cries a little bit” when he gets his hair done.

The thing about Flores is that you don’t have to question too long if he’s joking. He’ll let out a smirk or snicker right away to let you in on the joke.

He learned a long time ago how this line of work calls for a sense of humor.

“Barbering is a personal thing,” he said. “You have to know how to talk to the person in the chair.”

And he knows. Because he’s not all jokes. He’s serious about keeping this place true to its original form, with those two 1957 barber chairs with red leather and that 1970s Coca-Cola machine that last served a soda for 35 cents. And the painted sign on the outside window with classic blue and red lettering that Flores got someone to do, also in the 1970s. And the same old-fashioned cash register that he only uses to stash cash for the day, which he often needs to since he’s serious about not taking credit cards.

“I’m an old-school barber,” he likes to say. “You know that saying? If something works, don’t fix it. That’s how I feel about it.”

And he means it.

He’s serious about other stuff. Like all the people that he sees every day. Three generations of people, now, who consider his shop their go-to place.

“I don’t call them customers,” Flores said. “They’re my friends.”

And friends have real conversations. The kind of conversations that might only open up between a barber and the person in the chair, between two people who are so physically close for 10 or 15 minutes that barriers break down and stay broken for decades.

Take it from Martinez, who has never cared for going to a fancier, newer barber shop. You know, the ones that serve booze or put crazy designs or lines in a faded cut. Martinez just wants to go to the place he’s gone since he was a baby. The kind of tradition that doesn’t break.

“Words can’t explain what kind of person Jerry is,” Martinez, 46, said. “He’s loving and big-hearted. You couldn’t ask to know a better person.”

Flores is like a father to him. And Martinez doesn’t call Mrs. Flores by her name. He calls her “Mom.”

That’s the kind of thing that keeps people coming back. And so they do. They come back after their wives have passed. After a cancer diagnosis. After tragedies they don’t want to speak about. But if they’d want to talk to anyone about it, they’d talk to Jerry. And he won’t say anything, because as he says, “some things don’t go past this shop.”

And as much as he can shoot the you-know-what, he can also cut through crap. Like when Flores asks about the loss or the surgery or the pain. How he remembers what was going on from last month. Like how, by now, he knows he’s more of a therapist than just a barber.

Like when he talks about his Christian faith and tries to pass it onto others. He doesn’t always bring it up, but he feels it’s part of his purpose to talk about it.

“They think of you as a counselor or something like that,” he said. “There’s a lot of spiritual talk with different people. You bring up talking about the Lord, because everyone’s looking for the Lord nowadays. And if you don’t share with them, it’s a big loss to me.”

Flores isn’t one to tear up, but he does when thinks about that.

“When people say, ‘Jerry, you’ve helped me,’” Flores said. “That’s the most important thing to me.”

As his wife says, people come here for comfort. She says she doesn’t want to be “braggadocious” about it, but she’s seen he has a way with people, whether it’s nervous kids or adults with special needs or 90-year-olds who don’t trust just anyone with their hair. When his clients have gone on to live in nursing homes, he’s been known to make visits there for haircuts.

“He makes everyone feel calm, for whatever reason and that’s a gift,” Anna Mae said. “To me, he’s been a servant.”

And Jerry would like to keep being that servant for as long as he can.

As his wife says, he had 53 days off during the pandemic and could barely stay still. He built a deck for their house in the meantime.

He applies the same mindset to house projects as he does to haircuts.

“Whenever I’m building something, I always picture it ahead of time in my head,” he said. “It’s an art.”

So Flores is happy to be back in his happy place, which many people consider their happy place. Even though it’s a little bit different of a place while Flores tries to keep being pandemic-safe by allowing only one customer in at a time, versus the norm of an ever-chatty shop. Flores doesn’t mind the quiet, as he never knows when he might get a break during the busyness.

“Barber shops like us are kind of becoming obsolete,” he said. “We’re fading away and we’re not being replaced.”

But when it’s busy, he’s full of adrenaline. Of that next joke. Or good talk. Or, yeah, a good haircut.

“You can see how it makes a difference,” Flores said. “They go out the door looking good and feeling good about themselves.”

There have been so many of those out-the-door moments over the years. And moments of seeing those people walk back in the door.

August will be another big moment. Or, moments. Jerry and Anna Mae will celebrate their 50th anniversary a few days after the 50th anniversary of the barber shop. Yes, the barber shop came first. But a whole life came after. You’ll hear it, if you let Jerry Flores talk. About his kids and grandkids and all the sports they’ve played. And how much he loves his wife. And how much they love stopping at that little Mexican restaurant in Pueblo whenever they’re craving that food. It’s the place Flores might recommend to customers, or friends, who walk in.

“You find those places you like and you keep going back,” he said. “Kind of like the barber shop. You hang onto the good ones.”