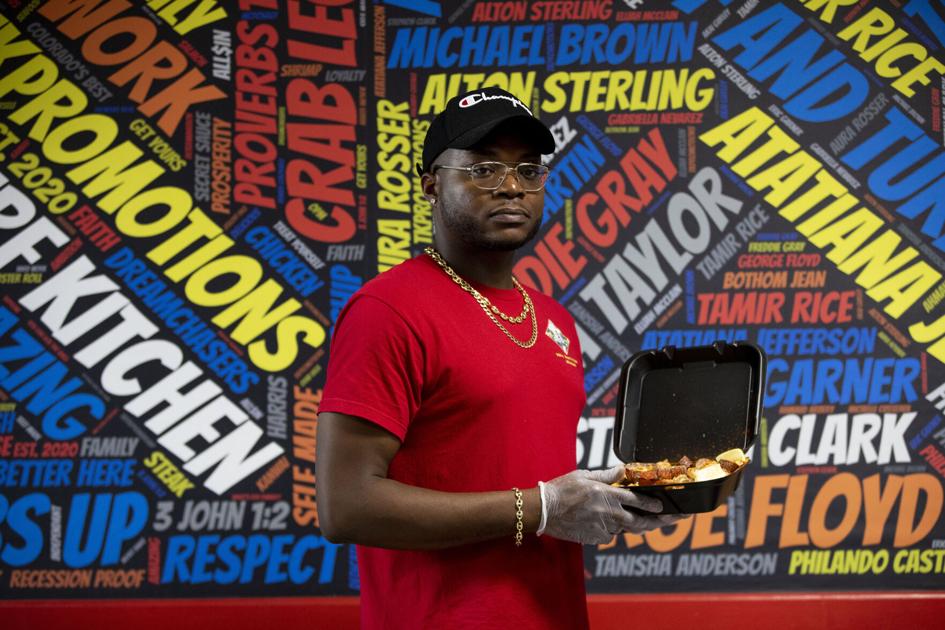 DENVER • Before walking into TK’s Surf and Turf, many first-timers have probably seen a preview of what’s to come.

There’s a video of a grown man crying in his car while eating the restaurant’s shrimp. “It’s so good,” he mutters dramatically, as sad music plays in the background.

There are photos of celebrity rappers like Bun B or members of the Denver Broncos stopping by for plates of food.

And there’s that one TikTok, a slow-motion dive into TK’s Surf and Turf’s signature dish. Taken by the Denver Food Scene’s account, the 15-second clip shows “The Works,” a platter piled with colorfully seasoned lobster, shrimp, sausage and crab.

It’s the kind of mouth-watering video that has made food videos climb to the popularity of cat videos on the Internet. After watching someone’s hand pull apart pieces of lobster and dip them into a buttery sauce, TikTok commenters were ready to try it, saying things like, “I’m going and I’m taking everyone I know with me!” and “I know what I’m having for dinner now.”

The video surpassed 1 million views across multiple platforms in January. In the real world, that equated to long lines stretching through the parking lot outside TK’s Surf and Turf.

It had only just opened in October 2020.

Owner Tyler Kanwai, whose initials form the business’s name, says he wasn’t prepared for the rush. But he and his team, which includes his mother, Tina, have learned from that time.

“It was like a tsunami,” Kanwai said, as he pointed to a colorful mural on the restaurant floor of a cartoon version of himself surfing a wave. “Now, it’s like things are calmer. We’re surfing the second wave.”

The second wave means customers still come in because of videos they saw on the internet.

There’s a lot of hype, something Kanwai’s mother addresses when people walk in.

“Welcome to TK’s,” she says from behind the counter, before explaining the menu seen on a chalkboard above her.

For those not in the mood to fork over $55 (plus more for sides), there are other options like a shrimp alfredo dinner for $25 and the option to build your own entree. As an homage to Kanwai’s childhood favorite drink, TK’s exclusively sells Calypso-flavored lemonades. “It’s like liquid candy,” he says.

He’s most proud of “The Works,” which he says features the “best of both worlds.”

“I make it the way I like to eat it,” he said. “And people like it. People hop off the plane to come here and get it.”

They also come in to support Kanwai, a Denver native with a background in party promotion. He grew up cooking, ever since he was old enough to turn on the stove, but most of his friends and followers didn’t know that side of him until Kanwai started selling plates of food out of his house in recent years. When the pandemic hit and restaurants closed, Kanwai was able to keep selling food. As he got even more popular, Kanwai decided it was time to take a risk and open his own place.

He also made the place look how he wanted, with walls covered in different words and phrases with various sizes and colors. Some words are food-themed, like “Seafood tastes better here.” Some carry more weight, like a wall full of names of Black people killed by police. Breonna Taylor, George Floyd and Elijah McClain are among the dozens of names.

He holds that title proudly. As TK’s nears its 1-year anniversary, he wants to keep riding the wave. More attention and viral videos might come along. But Kanwai wants to focus on making the next plate of food as pretty and tasty as the last.

“I just want it to be about good food and good vibes,” he said. “You come here and you’re family.”