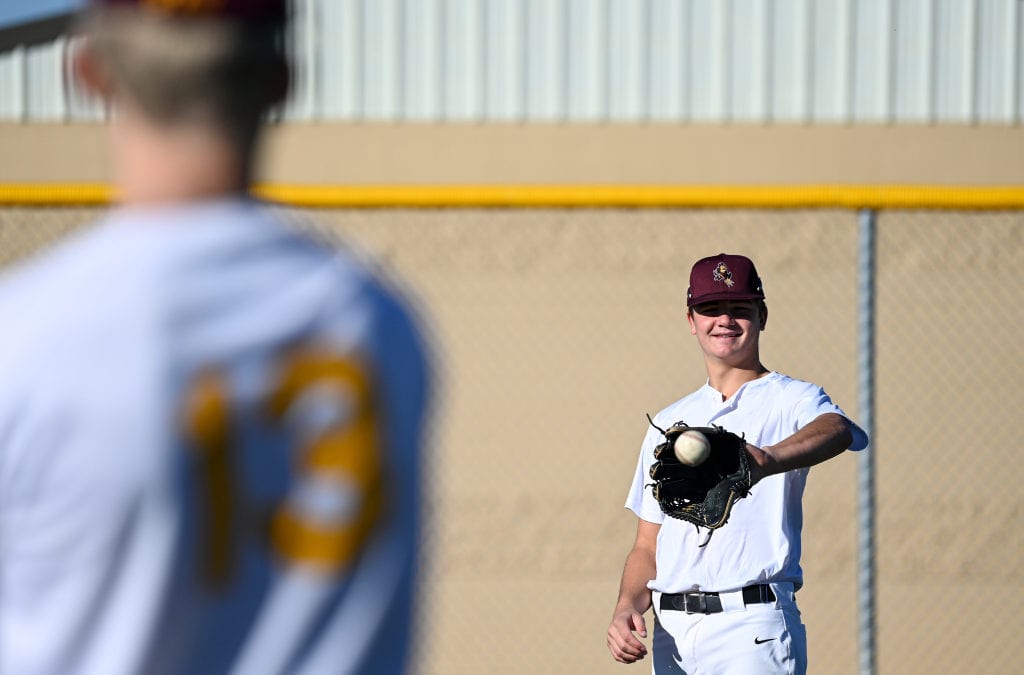 This past spring, the Severance baseball team saw its first opportunity to showcase its brand new program — and to experience the taste of high school baseball — squashed by the COVID-19 pandemic.

But after having this prime opportunity taken from them, Silver Knights assistant coach Josh Jurado and the bulk of his team created an opportunity for themselves.

They didn’t just showcase what their own young upstart program is capable of; they provided a glimpse of what an entire class of youthful northern Colorado talent is capable of.

This past summer, Jurado launched the 970 Sun Devils Club Team. They played during the summer and fall as a 16-and-under program made up of athletes belonging to the Class of 2023. The team consisted of players primarily from Severance but with others from throughout northern Colorado mixed in.

These athletes would have made their high school baseball debuts this past spring if not for the pandemic wiping out what would have been their freshman seasons.

“We just wanted to play baseball,” said Severance sophomore Nolan Hertzke, who is also the quarterback for the Silver Knights’ football team. “After a couple tournaments, we thought, ‘we can be pretty good.’ … We were playing up (age classes), because we just needed to see that competition. And, it was really fun seeing a bunch of 2023s bringing it to 2021s.”

The 970 Sun Devils featured nine athletes from Severance High School, two from Fossil Ridge, one from Eaton, one from Roosevelt, one from Resurrection Christian, two from Windsor and one from Loveland.

Jurado, a 2008 Valley High School graduate and former Greeley GoJo Sports and Colby (Kan.) Community College player, had been coaching the Severance players since they were about 9 or 10 years old. And, in forming the Sun Devils, he just recently became acquainted with these talented youngsters from surrounding northern Colorado communities.

He admits he was “blown away” but what he’s seen.

The Sun Devils had 16 home runs as a team this past summer and fall, including eight from Hertzke. It also had a .375 team batting average, led by Eaton’s Ryder True (.459), Roosevelt’s Caden Karabensh (.436) and Severance’s Cam Christensen (.429).

The team racked up wins against squads made up of mostly older athletes, players that are seniors this school year.

Among the notable accomplishments, the Sun Devils won a Five Tool Colorado Regionals Championship, playing an age group up, this past summer.

After having the high school season canceled, the club season allowed these young athletes to gain valuable experience playing against high school varsity-caliber competition. This could prove particular important for the nine players from Severance, which will play baseball for the first time as a program this spring.

Severance was supposed to launch its baseball program with sub-varsity-only competition this past spring. Now, it will jump right into varsity action this coming spring, the first baseball season ever for Severance, which is in its second year as a high school.

“This will help us a lot,” said Silver Knights sophomore Ty Adam, who is also a top basketball player. “None of us actually had seen what it looks like to play at the high school varsity level. So, being able to actually start, as a freshman, playing at this level helps us see what we need to work on to get better, and what it takes to actually become an elite-level varsity team.”

The Sun Devils traveled to places like Wyoming, Texas and Arizona for tournaments.

Their youth aside, the talent on this Sun Devils team was eye-opening, Jurado said.

The team has several pitchers touching mid- to upper-80s on the radar. The team’s raw, yet impressive, talent began to emerge to the forefront in recent months, as the Sun Devils racked up wins against older talent-laden teams.

“I think a lot of people aren’t aware of them just because they were robbed of their freshman year due to the pandemic,” Jurado said. “But, if you’re looking at the talent here in northern Colorado in the class of 2023, there is a lot to pick from. … There’s a lot of young talent. And, they have upperclassmen arms and even college-level arms. It blows me away how much talent there is and how young they are.”

And, now with valuable experience and confidence in hand, Tyler Kubat and the other 16 players on the Sun Devils squad can begin to shift their focus toward the spring baseball season with hopes all their club ball success will carry over.

Bobby Fernandez covers high school sports for the Greeley Tribune. Reach him at (970) 392-4478, by email at bfernandez@greeleytribune.com or on Twitter @BobbyDFernandez.