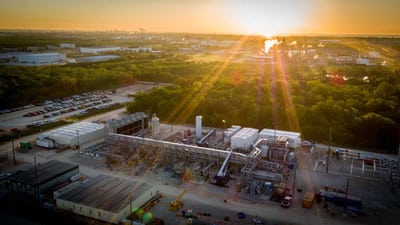 The proposed projects are a giant leap forward for Durham, North Carolina- headquartered venture capitalist firm 8 Rivers, and NET Power, a firm it holds jointly with industry backers that is working to commercialize the Allam Cycle.

Despite intense interest from industry, NET Power has been quiet about developments surrounding the potentially revolutionary technology, including any achievements at a NET Power test facility in La Porte, Texas. The company marked its last substantial technology triumph in May 2018, when it achieved first-fire of a novel commercial-scale 50-MWth combustor at the La Porte facility.

But on Thursday, 8 Rivers CEO Cam Hosie, who replaced 8 Rivers and NET Power co-founder Bill Brown in February, said the Illinois and Colorado projects will “jump-start” the deployment of “hundreds of NET Power plants globally and accelerates the drive to achieve net-zero carbon emissions by 2050.” Bloomberg on Thursday reported, citing Hosie, that “a dozen” other NET Power plants are “in various phases of development, with some planned to be built outside the U.S.”

[For more about the varied array of  sCO2 cycles under development, see “ Cycles?“]

As POWER has reported, the Allam Cycle is essentially a specialized power cycle that is directly fired with oxy-fuel, and uses supercritical CO2 instead of steam as its working fluid. The cycle also recycles its exhaust heat and eliminates all air emissions, including traditional pollutants and CO2. As a byproduct, the cycle produces pipeline-quality CO2 that can be sequestered. NET Power has said these attributes could make it more cost competitive and efficient than traditional gas power plants

Another way to think about it is that it is essentially “any supercritical CO2 Brayton cycle that is oxy-fueled and direct-fired; it recuperates turbine exhaust heat via a recycle stream; it is able to use a heat source in addition to the turbine exhaust; and it uses a turbine inlet temperature above 800C (1,000C to 1,200C optimal) and inlet pressure above 80 bar (200 bar to 400 bar optimal),” a spokesman said.

8 Rivers said it plans to reach a final investment decision in 2022 to build the 280-MW Broadwing Clean Energy Complex in Illinois, but if all goes well, the plant could begin operations by 2025.

“Warwick Capital Partners LLP (Warwick) will serve as a development financing partner through its targeted investment vehicle Warwick Carbon Solutions. NET Power continues to lead the commercialization of the Allam-Fetvedt power cycle technology that was invented by 8 Rivers and will be deployed at Broadwing,” it said.

The project—which will involve “more than a half-billion-dollar investment into Central Illinois”—proposes to build on an existing carbon storage facility at Decatur funded by ADM and the Department of Energy. “In the coming months, the Broadwing Clean Energy Complex team will work together to advance key elements of the proposed project, from engineering design to permitting activities to the signing of final contracts between the companies,” the company said.

8 Rivers will meanwhile also develop the 280-MW Coyote Clean Power Project in Colorado through a partnership with the Southern Ute Indian Tribe Growth Fund (SUGF). “8 Rivers, through its Zero Degrees development business, and the SUGF plan to design and construct a NET Power plant over the next five years,” the company said. It said a  final investment decision is expected in 2022, and production could begin by 2025.

“We are delighted to partner with the Southern Ute Indian Tribe on this clean power project, highlighting our collective leadership in the energy transition to a carbon neutral environment. The Coyote Clean Power Project’s affordable delivery of zero emissions power is unprecedented, and the project is a model for future deployments of this critical decarbonization tool,” said, Damian Beauchamp, president at 8 Rivers and Board Member of NET Power.