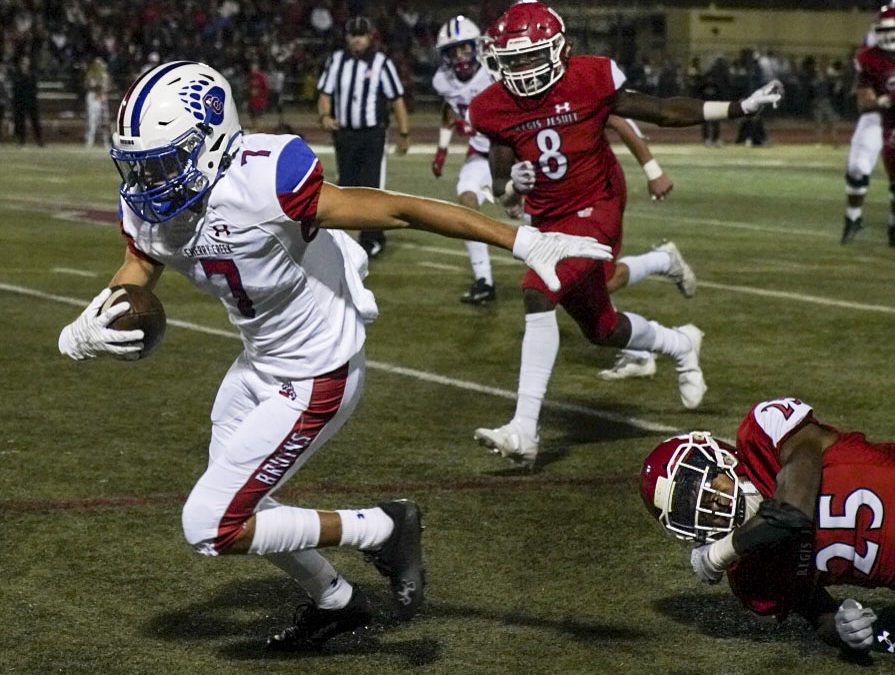 The two-time defending 5A champion Bruins open league play against a Cougars team riding a three-game win streak. The Bruins have won 26 straight against Colorado teams and five in a row vs. CT. Creek’s stout defense will be challenged by a Cougars attack anchored by CU-bound tackle Travis Gray and an array of weapons that include QB Logan Brooke (1,242 passing yards, 16 TDs), WR Jack Pierce (31 receptions, 506 yards) and RB Ciaran Hyslop (97 carries, 639 yards).

A resurgent Wildcats program gets another crack at one of the top 5A teams in the state two weeks after hanging with No. 2 Cherry Creek for a half. A-West’s 21 points in that 53-21 loss were the most scored against the Bruins in 14 games. While Columbine’s defense isn’t quite as dominant, the Rebels appear to once again be among the 5A elite. Their lone loss of the season came at top-ranked Valor Christian (35-21) last week, and that was a one-score affair entering the fourth quarter.

Don’t let Mullen’s record fool you. No team in the state has played a more difficult schedule. The private school Mustangs have faced four of the top eight teams in the current CHSAANow.com 5A poll, beating one (No. 7 Legend). Things don’t get any easier with Ralston Valley up next. The public school Mustangs have allowed only 9.2 points per game through five weeks — an effort they will need to replicate as they begin the 5A Jeffco League gauntlet.

The Eagles began playing up a classification in league play last fall, and paid the price with a heartbreaking loss to Legend that began a string of three straight defeats to end last season. They now return to the scene with a red-hot QB (Josiah Roy, 1,177 total yards) and defense that has more tackles for loss (57) than points allowed (49). Legend running back Bryce Vaz (101 carries, 700 yards, nine TDs) should expect plenty of resistance.

The top-ranked Bears face their stiffest test yet with the Indians set to visit Monument. Montrose has held all but one of its five opponents to a touchdown or less, which should make for an intriguing matchup against a Bears offense that averages 40.8 points and 446 yards per game with three pass catchers with more than 200 yards receiving in Anthony Costanzo (15-246), Ayden Snow (6-258) and KC Fackerell (20-269).

Since surviving a slugfest in Jacksonville, Fla. (23-20 over First Coast), the Eagles have been a force of nature, outscoring teams 187-36 over four games. Junior RB Noah Triplett has 740 total yards and 15 TDs, while senior QB Adam Graves has 817 yards and 10 TDs on 48-of-75 passing. The Bears, who possess an explosive offensive of their own led by QB Jaedon Minter (1197 passing yards), will likely have to match Dakota Ridge’s fireworks to have a chance.

Eagle Valley has come a long way from a winless 2017, with first-year coach John Davis guiding the Devils to a pair of overtime victories and their best three-game start in seven years. Now comes a date with the fifth-ranked Warriors, who have been impressive in outscoring opponents 152-41 so far this season, but have only played once in the past three weeks (53-12 over Palmer).

The Patriots carry the DPS banner into their final non-conference game of the season, fresh off a dramatic 41-34 win at Monarch. Junior RB Cellus Honeycutt is a big play waiting to happen with a touchdown run of 91 yards and an average of 11.1 yards per carry (47-522). Running room will likely be harder to come by against an Evergreen defense that has allowed just 22 points through four games and dropped ball carriers for a loss 29 times this season.