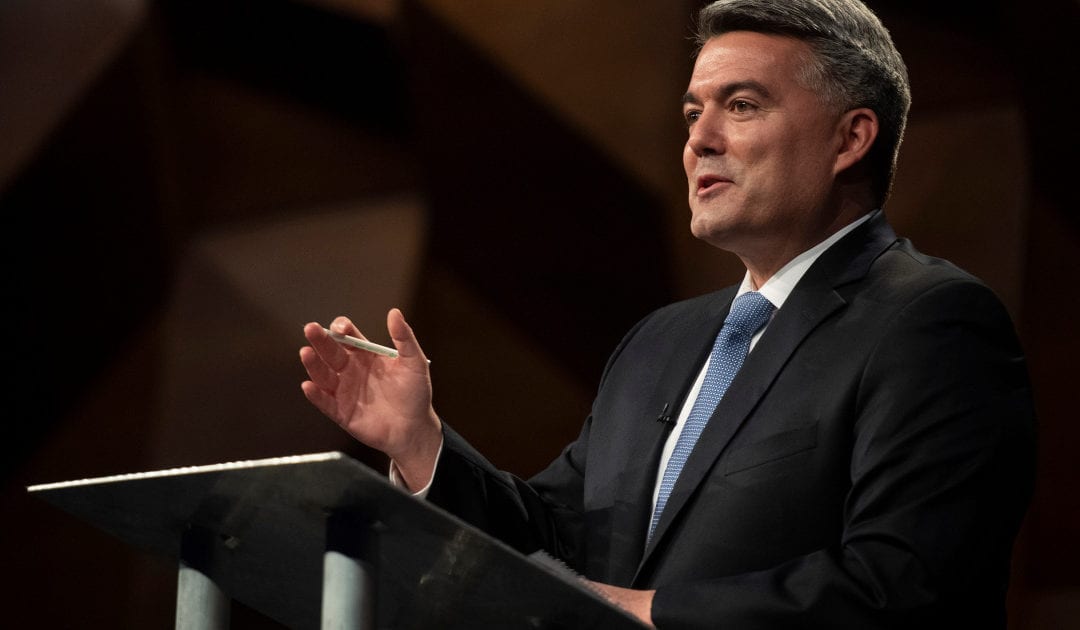 Six years ago, Cory Gardner and John Hickenlooper appeared on the same ballot.

In the U.S. Senate race, Gardner — then a congressman — upset a Democratic incumbent senator in a strong Republican year. In the governor’s race, Hickenlooper beat back a GOP challenger to win his second term.

Plenty of similarities exist between the 2014 election and now as the candidates meet head to head. Health care is at the center of the debate. A disease outbreak — then Ebola, now coronavirus — drew headlines. And the incumbent is fighting for his political life.

More than a quarter million voters switched political parties. And more than a half million new voters registered in the state, a new Colorado Sun analysis shows.

Gardner consistently trails his Democratic rival by large margins in the polls. Hickenlooper is crushing fundraising records and outspending Gardner on television advertising.

Most political prognosticators point to President Donald Trump and his dismal ratings in Colorado as the reason Gardner is struggling. But even without Trump at the top of the ticket, Gardner and other Republicans on the ballot faced an uphill battle in 2020.

“There’s just not a comparison to the environment in 2014, when Cory Gardner won by 40,000 voters, to what he’s looking at now,” said David Flaherty, the CEO of Magellan Strategies, a prominent polling firm in Colorado.

“It was more of a fair fight — the math wasn’t as challenging for Republicans back then,” said Flaherty, who is among those who switched to unaffiliated from Republican.

To get a sense of what changed since the two candidates last appeared on a ballot, The Sun looked at voter participation in 2014 and compared the figures to voter rolls at the end of August.

Here are five numbers that show why the terrain favors Hickenlooper and not Gardner — regardless of how the campaign took shape.

Gardner’s margin of victory over Udall was 39,668 votes.

The party that doesn’t hold the White House typically performs well in midterm elections when a president is in their second term. And a strong Republican year helped boost Gardner over the top.

Other numbers from 2014 that stand out: About 113,000 people voted for candidates other than the major party contenders — nearly three times Gardner’s margin of victory. Another 35,000 voted in the 2014 election but didn’t make a selection in the U.S. Senate contest, The Sun found.

And in 2014, Republicans and Democrats were about even in voter registration. Now Democrats hold a nearly 3 percentage point advantage.

The largest group in Colorado remains unaffiliated voters, who in the latest polls favor Hickenlooper over Gardner by solid double-digits.

Most of them became unaffiliated, but the Democratic Party suffered fewer losses than the GOP, according to the analysis.

Tom Plant, a former Democratic House member from Boulder County who now lives in Buena Vista, said he switched to be unaffiliated because he didn’t want to be labeled.

“It doesn’t have anything to do with the Democrats, it’s not like I went running from the party,” he said. “I noticed among myself and other people that I know, you make assumptions about people about their party affiliation. That’s just so incredibly silly. I don’t know anybody of any party who thinks exactly like anybody else.”

Former GOP state Rep. Rob Witwer switched parties for similar reasons. “They’re much more focused on politics than policy,” Witwer said of the two parties. “They’re more interested in defeating the other party than in doing something with their power.”

He pointed to an issue such as immigration. “Each party would rather have the problem than the solution …. It turns out voters for them,” he added.

In 2020, 1.8 million voters are making a decision on Gardner and Hickenlooper for the first time — because that’s how many people didn’t vote in 2014 but are now active voters.

“Presidentials always have higher turnout,” said Amber McReynolds, former Denver elections director who is now CEO of the nonpartisan National Vote at Home Institute. “There’s a lot of voters that are presidential-only voters. There’s more attention, the media talks about it every single day. That’s just not the case in midterm elections.”

Moreover, a different voter demographic shows up for presidential elections compared to midterms. And it tends to be younger and favor Democrats.

Nearly half of those presidential-only voters are between the ages of 18-34, according to a Magellan Strategies report, and the age bracket favors Democrats.

Of the voters who didn’t vote in 2014 but then voted in the 2016 election, 31% were Democrats, compared to 25% Repubican, the report found. The largest portion, at 42%, were unaffiliated voters, who once again favor Democrats.

And the numbers show the new voters lean Democratic. Half are unaffiliated voters, 28% are Democrats and 19% are Republicans, the Sun found.

“People are rejecting the two-party system,” said McReynolds, who has always been unaffiliated. “People are making their own choices and declining the label that comes with the parties.”

Those generations make up 39% of all active Colorado voters through the end of August.
“These are those underlying demographics that are really starting to have a political impact on the makeup of our state,” said Flaherty at Magellan Strategies.

Many of these voters became politically active when former President Barack Obama held office, and polls show they are repulsed by Trump.

“They really came of age in the Obama movement,” Flaherty added. “They have been battling for the last 12 years and many have not been won over in their hearts and minds by Republicans.”

In the U.S. Senate race, the recent polling suggests Hickenlooper does better with younger voters while Gardner performs best with those over age 50.