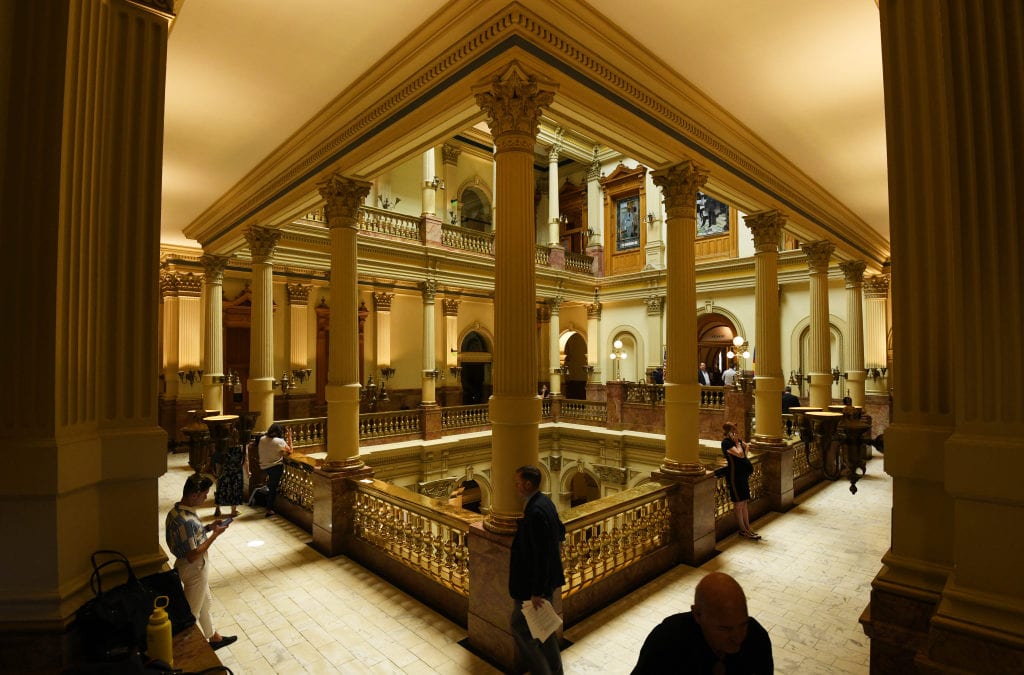 This year’s Colorado legislative session began with mandatory distancing and plastic partitions, hallways and committee rooms devoid of any members of the public and widespread fears of economic ruin.

By the time lawmakers wrapped it up Tuesday night, the Capitol felt a lot like it did before the pandemic — teeming with maskless lobbyists and the majority party rushing to jam through a couple of big-deal, last-minute bills that Republicans could only protest.

Now, 116 days after the legislative session began, Colorado is poised to change in a great many ways with better-funded roads, six new gun laws, an amended tax code and new regulations on everything from highly potent marijuana products to air pollution to plastic bags at the grocery store.

Here are a few major storylines from the third year of a Democratic supermajority.

In stark contrast to the U.S. Congress, Colorado lawmakers really do work together. Many of the biggest bills of the session had at least one Republican sponsor, including transportation funding (SB21-260), child sex abuse accountability (SB21-88), marijuana regulations (HB21-1317), multiple environment and energy bills and a number of changes to the criminal justice system.

The biggest bill of them all — the $34.1 billion state budget — passed almost unanimously in the Senate, where lawmakers worked particularly well together. Compare it to two years ago, when they were tangling in court and frequently unable to debate bills in any productive fashion.

“That was bad,” Republican Sen. Dennis Hisey of Fountain said of 2019’s session. “It’s definitely more collegial now. The majority party is more willing to take input, occasionally even after that, on most bills. They’re well aware they’re the majority still and they will stand firm if they care deeply about something. But often they’ll listen to what we care about and make a tweak.”

The House was a different story this year: Republicans filibustered bills, fought among themselves and ultimately were unable to make much of a dent on policy. Fittingly the 2021 session ended with a House GOP filibuster of the Democrats’ big (and late-arriving) compromise climate bill, HB21-1266.

“We just keep trying,” House Minority Leader Hugh McKean of Loveland said on the last day of the session. “We just keep being The Little Engine That Could, going up that hill because the people of Colorado depend on us to bring their interest into these conversations.”

Democratic House Speaker Alec Garnett, left, meets briefly with GOP Reps. Hugh McKean and Marc Catlin, right, on the House floor at the Capitol in Denver on on June 4, 2021.

In the run-up to this session, state analysts believed the economy was in the throes of a pandemic-induced recession.

“I came into session thinking we weren’t going to be able to do much,” said Commerce City Democratic Sen. Dominick Moreno, who chairs the bipartisan Joint Budget Committee.

Turned out, it wasn’t the case. By March, economists and lawmakers were confident the state economy had rebounded, and the bounce back had massive policy implications. Lawmakers had to spend on the 2021-22 state budget than the year before.

And it was apparent across different areas.

“We had to cut education spending so dramatically last year,” Arvada Democratic Sen. Rachel Zenzinger said. “To return it back to where we were pre-pandemic levels is pretty historic, but (we) doubled down and restored funding to the grant programs we’d cut, and invested further into programs providing mental health relief. … We will see the result of that, and that’s just one area.”

Federal COVID stimulus money also provided , including through the recent infusion of almost $4 billion from the American Rescue Plan. Lawmakers will talk during the interim (they’re due back Jan. 12) about how to spend about half that money.

Working with (and around) TABOR

The Taxpayer’s Bill of Rights restricts lawmakers’ ability to raise money, and this session was full of examples of Democrats trying to creatively overcome TABOR.

Headlining that theme is SB21-260, the transportation funding bill that proposes to raise $5.4 billion by largely relying on fee increases for gas, drivers and other uses. Fees aren’t technically taxes but they hit wallets the same way, so Republicans cried foul on the bill. But it passed and will be signed soon. That’s what happens when Democrats run the place.

Democrats also advanced a trio of tax-reform bills, two of which seek to eliminate tax breaks for the wealthy in order to redistribute some $375 million annually.

But they’ll be hard-pressed to ever rewrite the tax code in a way that means people with more money pay a higher tax rate, because the state has a flat income tax rate that can only be changed at the ballot. It’s one of the many reasons that voters remain the bosses on fiscal policy, no matter how many seats Democrats control.

Members of the Colorado House of Representatives gather during the final day of the 2021 legislative session at Capitol in Denver on Tuesday, June 8, 2021.

The blue wave has limits

Colorado Democrats run the Capitol, and the governor — and every other state constitutional officeholder — is a Democrat. But as is true of the Democratic trifecta in Washington, D.C., majorities here do not guarantee the passage of liberal bills.

A few examples of Democratic bills that were substantially altered or killed this year: the public-private health insurance option whittled down from a true public option; the tenant rights bill that wound up exempting a wide swath of landlords; forgoing entirely a measure to change arrest standards and lower jail populations; and a failed attempt to provide more protection against workplace harassment and discrimination.

Plus, there were policies that never saw the light of day because broad Dem support wasn’t there, like an assault weapons ban and a state eviction moratorium.

Further proof that majorities don’t hold full sway? The Democrats have a 17-seat advantage in the House and a five-seat majority in the Senate, but progressive bills were easier to pass in the Senate.

“I think when you have a big majority like that in the House, people feel they are entitled to a pass on certain bills, because you think, ‘Hey, there’s others that can vote on this one,’” said Sen. Pete Lee, a Colorado Springs Democrat. “But over here, you lose three people and you don’t have your bill. So you’ve got to find a way to bring it along.”

There are counterexamples, of course. The legislature this year sent six gun bills to Gov. Jared Polis’ desk, three of which were introduced after the Boulder King Soopers shooting. That’s the power of the majority and a departure from the norm. Aside from 2019’s red-flag law, lawmakers hadn’t passed any gun bills since 2013.