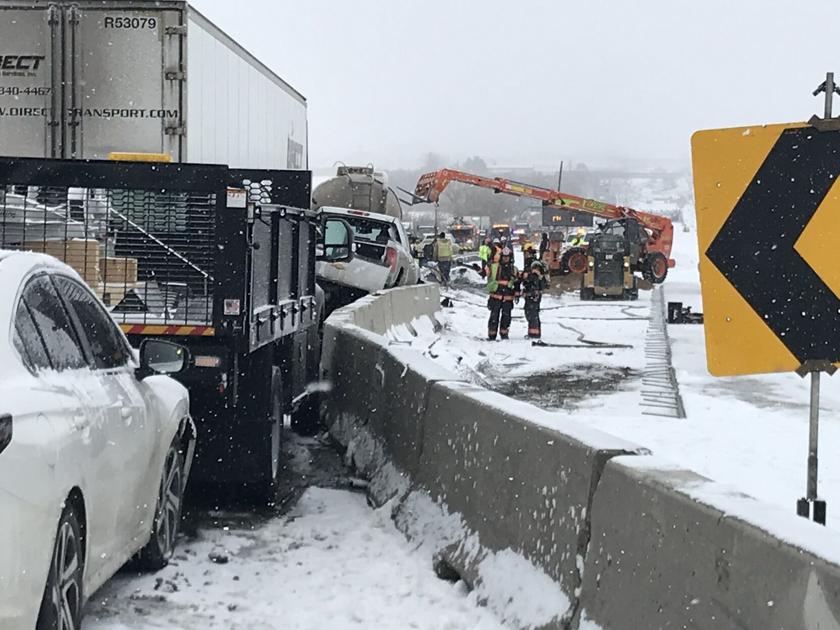 As heavy snow blankets Colorado, “major crashes” are starting to pile up across the state on Tuesday afternoon.

Portions of multiple roads and highways remain closed on Tuesday afternoon due to crashes, including parts of I-25 and I-70, with up to four-hour delays expected. Here’s a look at the latest updates on the road conditions across the state, according to the Colorado Department of Transportation.

Northbound lanes of I-25 are currently closed at Highway 402 in Loveland due to a multiple vehicle crash. As of 1:47 PM, northbound lanes could be closed for another four hours, according to Colorado State Patrol.

Police are also responding to several multi-vehicle crashes on northbound I-25 around US 34 near Loveland.

A southbound crash on CO 119 in Longmont has closed sections of the interstate.

Northbound lanes of I-25 remain closed at CO 402. Traffic is being detoured to frontage and county roads.

Northbound lanes of I-25 remain closed at mile marker 240 near Longmont. Traffic is being funneled back onto northbound I-25 at exit 240 for crash scene clearance.

Two southbound lanes are currently blocked on I-25 at mile marker 230.2, due to a multi-vehicle crash.

Officers are also working on a crash with serious injuries. Alternate routes are being advised due to closures on westbound I-70 at Colfax and northbound E470 to westbound I-70.

#APDTrafficAlert Officers are working a crash with serious injuries. The following roadways are CLOSED:
W/B I-70 at Colfax
N/B E470 to go W/B I-70

Traffic is continuing to stack up, with nearly a foot of snow expected to drop through the evening.

“Do your part and keep your speeds slow,” the Colorado State Patrol advised in a tweet.

Traction laws have been activated in parts of the state including US 285 west of Bailey, US 6 over Loveland Pass, and CO 9 over Hoosier Pass between Fairplay and Breckenridge.

Editor’s Note: All closures are subject to change. Check CDOT’s Facebook, Twitter (@coloradodot) or cotrip.org for closures and delays on highways and roads across Colorado.