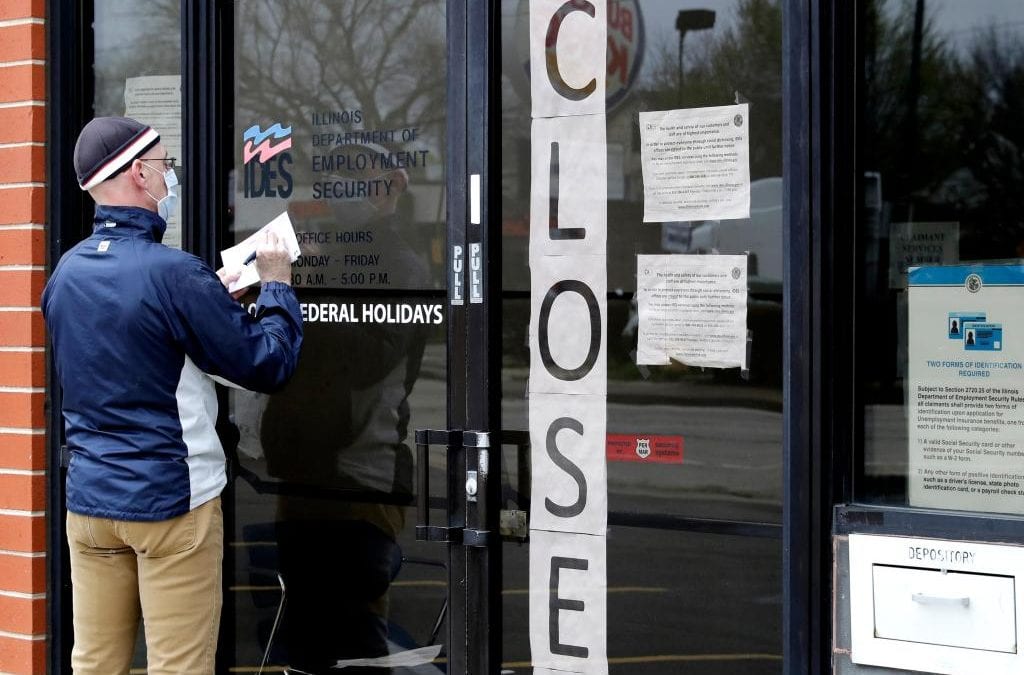 Roughly 33.5 million people have now filed for jobless aid in the seven weeks since the coronavirus began forcing millions of companies to close their doors and slash their workforces. That is the equivalent of one in five Americans who had been employed back in February when the unemployment rate had reached a 50-year low of just 3.5%.

In Colorado, another 41,313 people filed initial claims last week, according to the state labor department.

That’s down significantly from the 79,568 that filed the week before but still the sixth-highest weekly total ever recorded in the state. All of the top seven weeks for claims in state history have come since March 8.

In total 419,547 people in the state have filed for unemployment support over the last seven weeks, a staggering number that blows away any single year on the state’s record books. That represents more than 13% of the state’s labor force.

While state labor officials speculated the wave of new filings may be slowing, volume is still off the charts.

“Even if weekly initial claims volume drops to the 5,000 to 10,000 range that will be similar to the weekly number of claims during the great recession,” state labor economist Ryan Gedney said in a media call Thursday.

On Friday, the federal government will issue the April jobs report, and it’s likely to be the worst since modern record-keeping began after World War II. The unemployment rate is forecast to reach at least 16%, the highest rate since the Great Depression, and economists estimate that 21 million jobs were lost last month. If so, it would mean that nearly all the job growth in the 11 years since the Great Recession ended has vanished in a single month.

Even those stunning figures won’t fully capture the magnitude of the damage the coronavirus has inflicted on the job market. Many people who are still employed have had their hours reduced. Others have suffered pay cuts. Some who lost jobs in April and didn’t look for a new one in light of their bleak prospects won’t even be counted as unemployed. A broader measure — the proportion of adults with jobs — could hit a record low.

The official figures for jobless claims may also be under-counting layoffs. Surveys by academic economists and think tanks suggest that as many as 12 million workers who were laid off by mid-April did not file for unemployment benefits by then, either because they couldn’t navigate their state’s overwhelmed systems or they felt too discouraged to try.

The program, known as PUA is open to self-employed people, gig workers and many others not traditionally covered by state unemployment benefits. Colorado launched its application portal for those benefits on April 20 saw 40,906 people file for support by April 25.

While PUA claims — and expanded $600-per week pandemic unemployment compensation payments — come out of federal coffers, regular state unemployment claims are paid out of a state trust fund. That fund, fed by unemployment insurance premiums paid by employers around the state was at $1.1 billion before coronavirus business impacts began driving people to file in droves.

A state report issued last year indicated the fund would likely be insolvent by March 2021 if the country entered a severe recession in 2020.

Last month, the state paid out approximately $315 million from the trust fund. That more than triples the previous record-high month, $102.8 million in May 2009.

Gedney estimated the fund balance is now around $750 million. A bulk of the state’s premium payments come in April and May, he said, projecting the fund will have collected between $250 million and $300 million by the end of this month. Then the pot could start draining much more rapidly.

The trust fund has run out of money before, in the early 1980s and again from 2010 to 2012. In both cases, the state borrowed money from the Federal Unemployment Account to keep paying benefits.

Colorado labor department spokeswoman Cher Haavind said some states have already submitted requests for funding from the federal government to prop up their systems. Gedney noted the loans are being offered interest-free through the end of the year.

As the economy slides further into what looks like a severe recession, economists are projecting that the gross domestic product — the broadest gauge of economic growth — is contracting in the current April-June quarter by a shocking 40% annual rate. As it does, more layoffs appear to be spreading beyond front-line industries like restaurants, hotels and retail stores.

GE Aviation, for example, has said it is cutting up to 13,000 jobs. Uber will shed 3,700 positions. MGM Resorts International has announced that the furloughs of more than 60,000 employees could turn into layoffs.

But the job cuts have hammered workers at restaurants, hotels and retail firms particularly hard. According to the payroll processor ADP, about half the total jobs in the hotel and restaurant industry — 8.6 million — disappeared in April, based on data from its corporate clients. A category that includes retail and shipping shed 3.4 million workers.

As businesses across the country have shut down and laid off tens of millions, the economy has sunk into a near-paralysis. Even as some businesses are beginning to reopen in certain states, factories, hotels, restaurants, resorts, sporting venues, movie theaters and many small businesses are still largely shuttered. Home sales are falling. Consumer confidence and spending are sinking.

The volume of layoffs exceeds anything Americans have ever suffered in such a brief period.