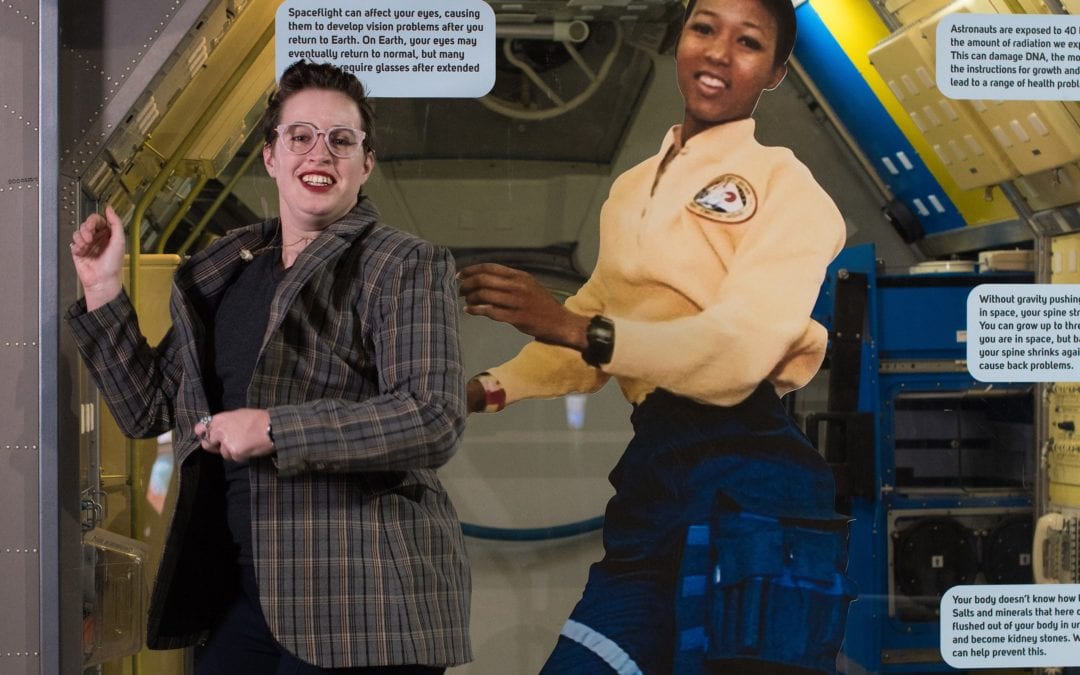 Long before she came to work at the Space Foundation Discovery Center, Rachel English was fascinated with science and history.

“I’ve always enjoyed [history],” English said. “It’s people telling stories about themselves as a way of understanding each other and understanding ourselves.”

The 28-year-old is a Colorado Springs native who graduated from Air Academy High School before earning a bachelor’s degree in history from Hendrix College in Arkansas and a master’s in museum studies from the University of Leicester.

When she returned to the Springs, she began volunteering at the Space Foundation Discovery Center as a docent, giving presentations to guests and helping look after the museum’s exhibits.

“I never really expected to end up in a science museum,” English said. “I loved space as a kid — I thought it was cool and interesting but I never wanted to be an astronaut. I was never great at math and I knew that any interest I had in science was eventually going to require me to do a lot of math, so I kind of steered away from it as much as I possibly could.”

Volunteering at the center, she rediscovered her love for space.

“It was kind of on a whim that I started volunteering here, and it’s been incredible,” she said. “I am now the curator and registrar, which means that I take care of our collection — our historic artifacts — when they are in storage, when they are coming into the collection and when they’re on display. I document and preserve our historic artifacts so that they can be seen and enjoyed by future generations.”

But English isn’t just interested in preserving space history. Her ultimate goal is to help make it.

In 2019, she co-founded the Out Astronaut Project — a scholarship for members of the LGBTQ community who seek to become astronauts.

“It basically came out of a trend that I was seeing in my experience in science museums … where it was really hard to find LGBTQ representation,” English said.

As a queer-identifying person, English wasn’t seeing herself and her experiences reflected in the content of many museums and began to wonder: For those in the LGBTQ community who want to be astronauts, what stories could they look to for inspiration?

“It’s really hard for a queer-identifying person to become an astronaut,” she said, “whether that’s because a lot of paths for going to space lead through the military, or because of entrenched — whether intentional or not — discriminatory cultures or practices, there’s a lot of barriers to queer access to space and to science.”

In an effort to change that, Out Astronaut teamed up with the Boulder-based astronautics research and education program Project PoSSUM to provide an annual scholarship for one LGBTQ scientist 18 or older to take part in Project PoSSUM’s astronaut training program. The organization’s first scholarship was awarded last year.

“Our goal is to put the first openly queer person in space,” English said.