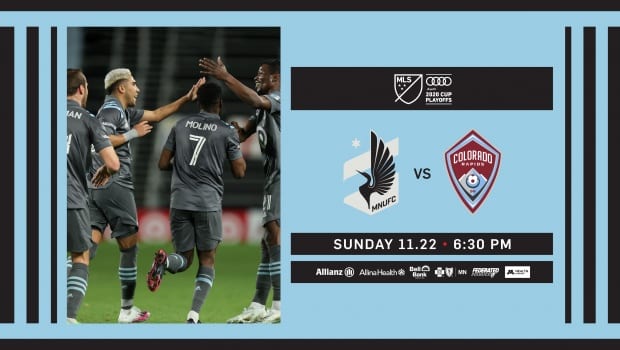 Minnesota United and Major League Soccer today announced the Loons will host the Colorado Rapids on Sunday, November 22 at 6:30 p.m. CT in Round One of the Audi 2020 MLS Cup Playoffs at Allianz Field. The game will be broadcast on ESPN and SKOR North Radio.

For the safety of our players, staff and fans, Minnesota United has made the decision to play all 2020 playoff games behind closed doors.

After the postseason kicks off with two Eastern Conference Play-In Round games on Nov. 20, Round One will feature eight single elimination matches from Nov. 21-24 on the road to crowning the 2020 MLS Cup champions on Dec. 12 (7 p.m. CT, FOX, UniMás/TUDN, TSN, and TVA Sports).

The Play-In Round on Nov. 20 will pit veteran head coach Bruce Arena’s New England Revolution (No. 8 seed) against first-year MLS manager Thierry Henry’s Montreal Impact (No. 9 seed) at Gillette Stadium (5:30 p.m. CT, FS1/FOX Deportes, TSN, TVA Sports). Then a head-to-head matchup between first-year clubs Nashville SC (No. 7 seed) and Inter Miami CF (No. 10 seed) at Nissan Stadium (8 p.m. CT, ESPN2/ESPN Deportes, TSN, TVA Sports) will guarantee that an expansion team progresses to the next round for the first time since 1998.

The winners of the two Play-In Round matches will advance to Round One.

Round One gets underway on Nov. 21 with an Eastern Conference doubleheader, featuring Orlando City SC (No. 4 seed) in their first-ever postseason appearance. Orlando City will face expansion-year counterparts New York City FC (No. 5 seed) at Exploria Stadium (11 a.m. CT, UniMás/TUDN, TSN, and TVA Sports). Next up, Columbus Crew SC (No. 3 seed) will host the New York Red Bulls (No. 6 seed) at MAPFRE Stadium (2 p.m. CT, UniMás/TUDN, TSN, TVA Sports). Both matches will be available in English language, streaming live on MLSsoccer.com and the MLS App in addition to local market English-language broadcasts, which will be announced in select markets.