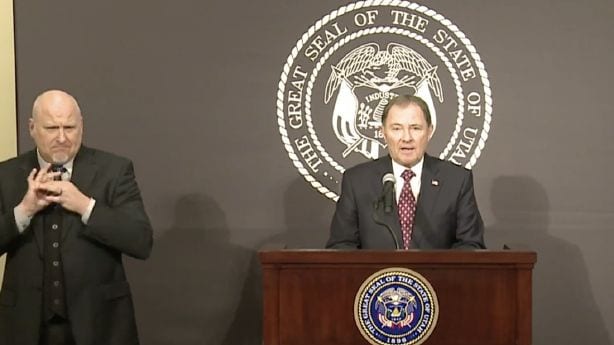 SALT LAKE CITY — Utah’s number of COVID-19 cases has increased to 787 in Utah residents and 19 in visitors, the Utah Department of Health confirmed Monday.

Two more deaths were also reported, bringing the total number of deaths in the state to four. One of the deaths reported Monday was from Davis County, and the other was a person from Salt Lake County between the ages of 18 and 60, according to Utah Department of Health state epidemiologist Dr. Angela Dunn.

So far, about 10% of the Utah cases have been attributed to community spread, meaning the person infected with COVID-19 had no known previous exposure to the disease, Dunn said. That low percentage indicates that social distancing measures are working in Utah, she added.

“We’re not growing as fast as our neighboring states,” Dunn said at a press conference Monday. “That means social distancing is working.”

“Everybody has a role to play and everybody needs to be engaged,” Herbert said Monday.

The number of cases the health department reports includes people who are currently infected, as well as those who have already recovered.

Previously, there were 705 cases in Utah residents and 14 in visitors.

Also Monday, Utah leaders announced the creation of One Utah Childcare, a service that will provide free childcare to essential employees, such as health care and government workers.

The services will be available on weekdays from 7 a.m. to 6 p.m. at various locations across the state, according to Tracy Gruber, director of the Utah Office of Child Care. The childcare centers will be staffed with people who have a previous background in childcare and have been through a background check process, she said.

For essential employees who work irregular hours, such as nights and weekends, childcare providers may be able to work out of employees’ homes, Gruber said. The service will be offered for as long as schools are closed.

People can go to jobs.utah.gov starting Wednesday to apply for One Utah Childcare services.

Monday, Wasatch County became the third county in the state to issue its own “Stay Safe, Stay Home” order.

The order goes into effect no later than 7 a.m. Wednesday and mandates that all businesses shall close, except for those deemed essential, until at least April 14, according to the Wasatch County Health Department. Businesses that remain open must engage in social distancing practices.

People in the county are advised to stay home unless they have essential tasks such as going to work or shopping for groceries. Children’s playgrounds also will be closed.

More information about the order is available at coronavirus.wasatch.utah.gov.

The loans will be available in amounts ranging from $5,000 to $20,000 and will be offered with 0% interest for a borrowing period of five years, according to a news release from the office. The loan payments will be deferred for one year.

Loans are being offered to businesses and not non-profit organizations, though future rounds of the loans may include non-profits, according to Val Hale, executive director of the Governor’s Office of Economic Development. To qualify, businesses must employ 50 or fewer people.

Businesses interested in the loans can apply starting at 8 a.m. Tuesday. For more information, go to business.utah.gov.

Dunn, Herbert and other Utah officials discussed the current coronavirus situation in the state at a press conference Monday. Watch the replay of the event below.