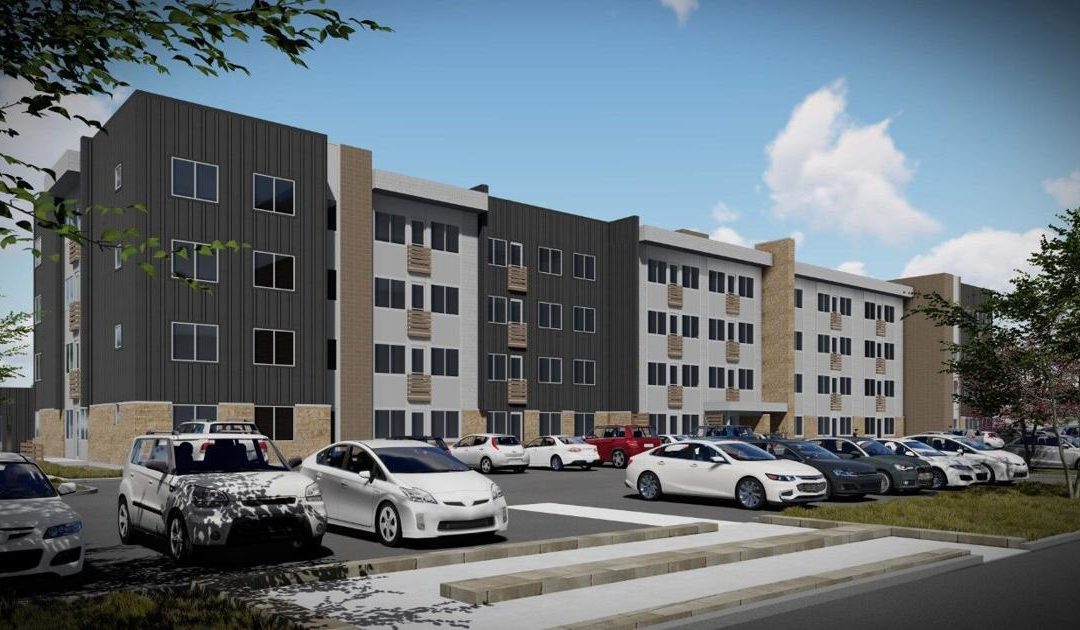 Two new apartment projects planned for opposite ends of Colorado Springs would provide sorely needed housing for restaurant employees, warehouse and industrial workers, teachers and other workforce members who can’t afford pricier rentals, according to proposals submitted to city officials.

The Equity Group, a longtime Colorado Springs development company, has proposed the two-building, 134-unit Airport Creek Point apartments on nearly 6 acres southwest of Powers Boulevard and Airport Road on the city’s southeast side.

The Equity Group purchased its site at Powers and Airport in 2018, which is adjacent to a WoodSpring Suites hotel and a McDonald’s restaurant. The site is roughly in the middle of a stretch of hotels, warehouses and other industrial uses along Powers, from Platte Avenue on the north to the Colorado Springs Airport on the south.

Equity Group principal Danny Mientka said he intended to develop the L-shaped parcel with medical uses to fill a void in that part of town. When demand for medical uses didn’t pan out, he switched to a plan for single-family homes for rent.

But Mienkta said it made sense to switch to housing that would serve employees in that part of town; the site is within driving distance of Fort Carson, Peterson Space Force Base and the airport’s Peak Innovation Park, a business park that includes an Amazon fulfillment center. The site also would allow renters to head west to downtown via Airport Road, he said.

Mientka is targeting Airport Creek Point as workforce housing for employees at hotels, warehouses and the like, but said there will be no income restrictions on renters nor will he seek to use federal low-income housing tax credits as a funding source.

Rents at Airport Creek Point will be $1,200 to $1,800 a month for a mix of one-, two- and three-bedroom units that will range from 611 to 1,238 square feet, Mientka said. Colorado Springs rents averaged nearly $1,233 a month in the first quarter, according to a recent industry report.

“It’s really designed around the single occupant or two different employees sharing a two-bedroom, two-bath so that they can meet the rental obligations and still have cash flow to live on,” he said.

“So it’s for that entry-level worker at an Amazon or one of the many hotels or motels along the Powers corridor that serve the airport that maybe can’t quite reach home ownership yet, but are in the workforce and prefer an apartment-living lifestyle,” Mientka said.

Amenities will include a clubhouse, fitness center, dog park, landscaped common areas and playgrounds, Mientka said. Renters also will find trash chutes on each floor, eliminating the need to haul garbage on an elevator and out to a dumpster. The project, however, won’t have a pool, which can be an expensive item, he said.

In a best-case scenario, Mientka said he hopes to launch construction in summer 2022 and have apartments available to rent in the first quarter of 2023.

For its project in the north-side InterQuest area, Lincoln Avenue Capital also describes its College Creek apartments as workforce housing, according to the company’s proposal submitted to city planners.

Unlike Mientka’s project, the College Creek apartments would be partially funded by low-income tax credits and occupancy would be restricted to tenants who earn 60% of the area’s median income, the Lincoln Avenue Capital proposal says.

Rents will be established annually by the U.S. Department of Housing and Urban Development and targeted for tenants who meet income qualifications, the company says.

In an email, Ben Taylor, a company vice president and project partner, said the InterQuest apartments “will deliver much needed housing for the growing workforce in the area, providing opportunities for people to live where they work.”

Lincoln Avenue Capital expects to start construction at the end of the first quarter in 2022, the company said via email. The first apartments would be available to rent in 2023 and the rest of the project would be completed that year. The company has contracted to purchase the site and is seeking city approval of a conditional use permit and development plan.

InterQuest is one of the city’s hottest commercial hubs and home to a growing number of restaurants, hotels and retailers. In-N-Out Burger built a nearby distribution and production facility; Centura Health broke ground recently on a 72-bed hospital; and Pikes Peak Community College’s Rampart Range Campus serves area students.

Amenities would include clubhouse and fitness buildings, an outdoor pool, lounge areas, a covered grill, picnic space and a playground.