2 killed in separate avalanches in Colorado 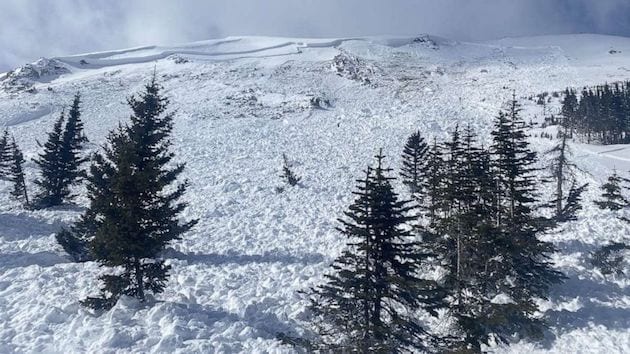 (DENVER) — Two people have died in separate avalanches in Colorado, bringing the state’s fatalities to 10 in the last three months.

A snowmobiler was buried in an avalanche west of Rollins Pass and a solo backcountry snowboarder was killed on the 12,477-foot Mount Trelease on Sunday.

The two deaths come after the nation recorded the deadliest avalanche week in more than 100 years earlier this month.

Ethan Greene, director of the Colorado Avalanche Information Center (CAIC), told ABC News this winter is shaping up to be the state’s worst avalanche season in modern history.

“This season is a 1-in-10-year event in terms of how soft the snow is,” which makes it more prone to collapsing, Greene said.

The snowboarder, identified by the Clear Creek County Coroner’s Office as David Heide, 57, of St. Mary’s, Colorado, was alone when an avalanche struck around 9:30 a.m. and killed him. He deployed an airbag on his backpack, which is designed to protect him in an avalanche, but it failed to keep him from being buried in the snow.

The snowmobiler was a 58-year-old male from Parker who was out with his 18-year-old son when an avalanche struck. His son survived, according to .

Both victims were in backcountry territory while the region was under a “considerable” avalanche danger warning by CAIC.

Colorado has just had a fresh dumping of snow and Gov. Jared Polis issued a on Friday to the backcountry community to steer clear of the mountains and read avalanche forecasts due to unstable snowpack.

An avalanche watch is in effect in Colorado for Aspen, Gunnison, Grand Mesa and North San Juan zones, with conditions forecast to worsen Monday night into Tuesday.

In Colorado, six avalanche fatalities this month alone and a total of 10 have been recorded since Dec. 15, according to the CAIC. Officials said the yearlong average is six.

The deadliest year for avalanches in Colorado in modern times was in 1993 when 12 people were killed. In 2013, the state recorded 11 avalanche deaths.

Prior to that, in the late 1800s and early 1900s, more devastating avalanches took place that ran into towns and mines. The CAIC considers modern avalanches to be after the 1950s when they impacted people participating in recreational snow sports.

Jan. 31 to Feb. 6 marked the deadliest week in the US since 1910 for avalanches with 14 fatalities, according to the National Avalanche Center (NAC).

In the last year, 25 people in the U.S. have died from an avalanche, according to the .

The CAIC is urging people to check the avalanche forecast before heading out, warning of “exceptionally soft snow pack.”

Experts say a weak base layer of snow combined with an increased interest in backcountry skiing amid the pandemic has contributed to the skyrocketing numbers.