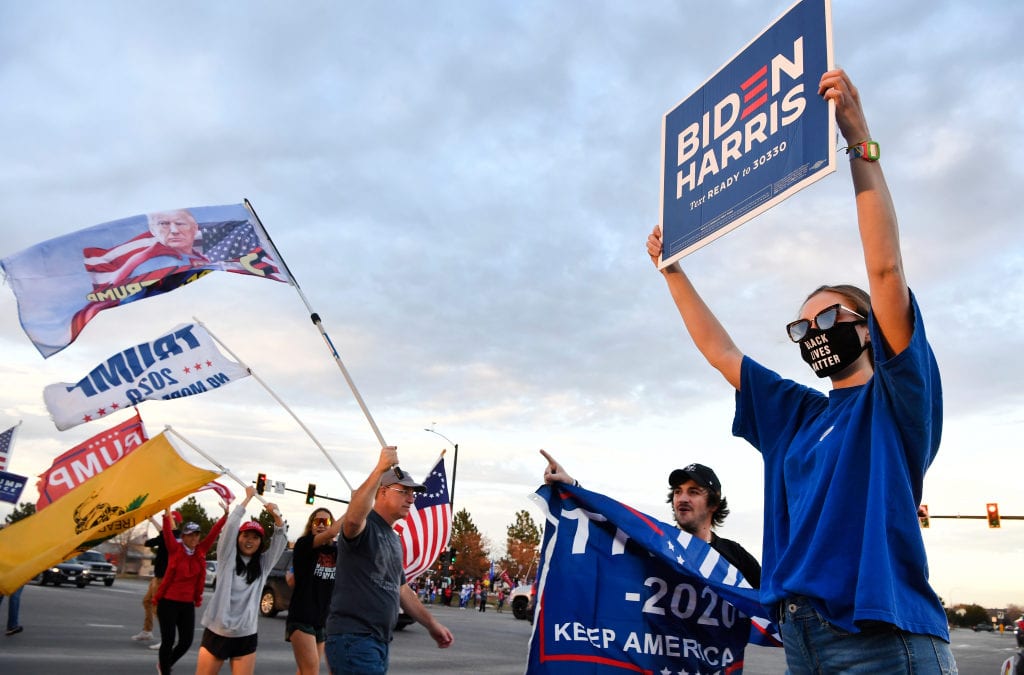 The Colorado election results came fast and furious Tuesday night, requiring dozens of Denver Post journalists just to keep up with the new numbers and race calls. Now that we’ve taken (half) a breath, here are some initial takeaways.

1. Colorado’s blue is getting deeper

Donald Trump lost Colorado by about 5 in 2016. As of midnight, Joe Biden led him by more than 12 here.

And that’s just the start of it.

Republican U.S. Sen. Cory Gardner lost. Democrats are poised to seize control of the University of Colorado system for the first time in decades. Though several statehouse races remained too close to call as of midnight, it was clear that Democrats would expand their majority in the state Senate, a chamber they already controlled. Previously competitive suburban districts were Democratic blowouts.

Ryan Winger, a Republican-leaning pollster with Magellan Strategies, said Tuesday evening, “Until something changes, Colorado is a blue state.

“With Democrats holding all major statewide offices, it’s pretty clear this is a state that has swung away from Republicans,” he said. “I think you might see some soul-searching (in the GOP).”

That may be an understatement.

The final ballot count won’t be available until later this week, but as of 5 p.m. on Election Day, the state reported 3.1 million ballots had been returned, with voting still underway at that point. That equates to nearly 75% of registered voters and would set a record for at least the last two decades – and likely much longer back. We know the final percentage will be higher.

As expected, GOP turnout surged in the final day after Republicans uncharacteristically held onto their ballots in the early-return period. In Tuesday’s less-than-final ballot count, Republicans’ turnout rate edged out Democrats slightly, at nearly 80%, even as their raw vote totals lagged unaffiliated voters and Democrats.

Every political observer worth their salt expected John Hickenlooper to win the U.S. Senate race. And while it’s not shocking he did so by a margin of about 10% — as of early Wednesday morning — it is noteworthy.

Senate races in Colorado were won by six points in 2016, two points in 2014, and less than that in 2010. Hickenlooper may end up matching or maybe even barely surpassing Mark Udall’s 10-point margin from 2008.

Hickenlooper did it with big margins in the Denver suburbs. When Gardner beat Udall in 2014, he kept Udall’s margins of victory small in Adams County (Udall won by 3), Arapahoe County (Udall by 2), and Jefferson County, where Udall won by less than a percentage point. As of Tuesday night, Hickenlooper led in Adams by 15 points, in Arapahoe by 21 points, and in Jefferson County by 15.

Interesting piece of trivia: With Gardner out of office next year, only one of Colorado’s nine members of Congress will have been born here. That’s Rep. Ed Perlmutter, D-Arvada.

The Gardner-for-governor speculation has begun.

“I think Cory could live to fight another day,” Dick Wadhams, a former Colorado GOP chair, told The Denver Post on Tuesday night. “If he wanted to run for governor or senator in 2022, he could do that.”

In his concession speech, Gardner gave no hint of a future run for office. He knows Colorado’s political landscape well, so don’t expect him to charge into a race he can’t win, and unless that landscape changes a lot in two years, it’s hard to see how Gardner can win statewide in 2022.

But to Wadhams’ point, Gardner is only 46, an age considered young in politics and few other professions. In fact, he’s younger than Hickenlooper was when Hickenlooper began his political career in 2003. So, we may see more from Gardner, even if a statewide run in 2022 isn’t it.

5. Direct democracy for the win

Coloradans easily supported a game-changing and very progressive proposal, Prop 118, to create a statewide paid family and medical leave mandate. Workers will now be entitled to up to 12 weeks of paid time off — 16 in some cases — through a program that both employees and employers will pay into. There is close to no chance that the state legislature, which is controlled by Democrats, would have passed this version of this policy. In fact, progressives have tried for years to pass more moderate versions of what Prop 118 promises. So supporters, backed by big financial support, took the fight to the ballot, and 57% of voters gave it a thumbs up with 85% of the vote counted early Wednesday.

“We knew it was really popular on the outside” of the Capitol, a jubilant state Sen. Faith Winter, D-Westminster, said.

If a bill version of Prop 118 would’ve been unlikely to pass the legislature, Prop 116 — a cut to the state’s flat income tax — would’ve been even more of a long-shot. There is only one Democrat at the Capitol who has advocated for this change, and it’s Gov. Jared Polis. Legislative Democrats in fact would generally like to see the income tax rate go in the opposite direction, in a way that taxes richer people at a higher rate. Conservatives placed this on the ballot and hardly broke a sweat on a victorious Tuesday night. A related conservative fiscal proposal, Prop. 117, was closer, but the “yes” side held a comfortable lead early Wednesday morning.

Despite polling that predicted a tight race for Proposition 115, the ban on abortions past 22 weeks, Colorado voters firmly rejected it Tuesday.

Coloradans have shot down three other attempts to restrict abortion here, but advocates of legal abortion feared that more people would support a ban later in pregnancy. The issue took on greater urgency after the death of Supreme Court Justice Ruth Bader Ginsburg in September led to an even stronger conservative tilt on the high court.

“The voters of Colorado have spoken loudly and clearly — abortion bans have no place in our state,” said Lucy Olena, campaign manager for the No on 115 campaign in a statement. “For the fourth time in 12 years, Coloradans have rejected attempts to ban abortion at the ballot, trusting patients and families to make the personal medical decisions that are right for them, without interference from politicians.”

7. CD6 is no longer a battleground

It seems like just yesterday that Colorado’s 6th Congressional District — Aurora, among other parts of Arapahoe, Adams and Douglas counties — was the most closely watched House district in the state. Democrats tried and tried to unseat former U.S. Rep. Mike Coffman, a Republican and the current Aurora mayor, for years. Only in 2018, amid a blue wave, did they finally break through with Jason Crow, the Democrat who dethroned Coffman. Just two years later, Crow was dominant, leading Republican Steve House by 18 as of midnight.

With Ilana Spiegel’s likely win over Richard Murray, the University of Colorado Board of Regents District 6 race was set to flip its board majority from Republican to Democrat for the first time since the 1970s.

The nine-member board, often criticized for its partisan nature, is one of the few university governing boards in the nation chosen through partisan political elections, evident in votes along party lines on issues as important as the 2019 selection of Mark Kennedy as the system’s new president.

Democrats were poised Tuesday night for upsets in at least two district attorney races, and another race in the historically Republican 18th Judicial District was separated by just 967 votes. Democrats led their races in the 1st, 8th and 17th judicial districts early Wednesday morning.

The outcomes of the races could provoke a shift in the dynamics of Colorado’s criminal legal system, as many of the Democratic candidates promised reform during their campaigns.

10. Get ready for a more liberal state government

Democrats entered Election Day in dominant control — 41 seats to the GOP’s 24 — of the state House of Representatives. We don’t know yet what exactly the partisan split in that chamber will be come January, as several races remained too close for the AP to call late Tuesday, but on the policy front, it may not matter much.

But it’s a different story in the upper chamber. Democrats entered Election Day with a 19-16 advantage in the state Senate, and with Chris Kolker’s win in Senate District 27, Democrats are assured to be up at least 20-15 next session. There are some state Senate races that were too close for the AP to call late Tuesday, but it’s possible Democrats pick up another seat or two.

Jumping from 19 to 20 is a bigger deal that many may realize. With just a three-seat majority, the Senate Democrats have been pretty moderate at times over the past two years. They couldn’t coalesce around a death penalty repeal in 2019. They never coalesced around paid family leave, or an eviction moratorium. They passed the red flag gun law by just one vote. Going from a three-seat cushion to a five-seat cushion gives Democrats more, well, cushion to go a bit bolder on progressive proposals moving forward. That’ll be even more true if the cushion is seven seats — a real possibility.

Mayor Michael Hancock may be losing a bit of his strong-mayor authority as preliminary election results Tuesday night showed voter support for measures 2E and 2G. The first would require council’s approval for certain mayoral appointees, and the second would allow council to change the city’s budget mid-year with some restrictions. Measures 2E and 2G held a lead of 9 percentage points and nearly 5 percentage points, respectively.

Hancock actively opposed the measures — and called on a number of high-profile friends to do the same — but City Councilwoman Robin Kniech said voters saw through that politically motivated opposition campaign.

Councilwoman Amanda Sawyer, who sponsored 2E, agreed. She noted that while Hancock campaigned against the measures, she and her staff let the issues speak for themselves.

“It was a risk, but a calculated risk,” Sawyer said. “We introduced these measures because we heard from the community that they wanted more transparency and accountability from the government, and that’s what we brought them.”

We never thought he would be one. And, lo and behold, rapper and presidential candidate Kanye West won just 0.2% of the vote.