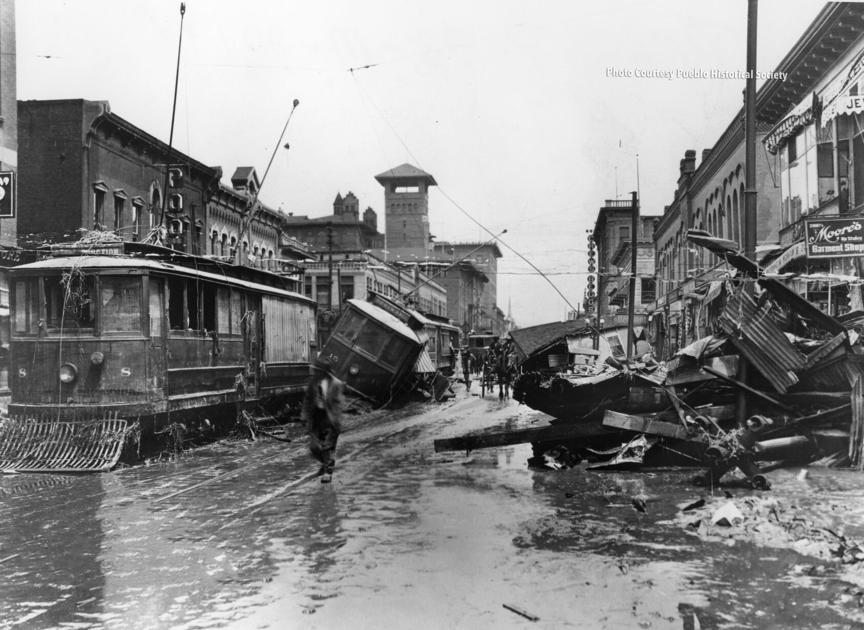 When torrential flood water swept through Pueblo 100 years ago it carried away train cars, livestock, businesses and hundreds of homes, and killed an unknown number of people. The deluge also reshaped the booming industrial town and in turn the trajectory of the state.

“There was talk about Pueblo becoming the state capital. It had the biggest industry in the state, with the steel mill and a growing vibrant population,” said Donald Banner, an attorney with Pueblo Conservancy District. The flood ultimately helped give Denver an economic edge.

As the historic flood water rose on June 3, 1921, Pueblo residents were confident in the Arkansas River’s levees built after earlier floods.

“There were people standing on the bridges, watching, not getting the message they were supposed to leave,” Judy McGinnis, library manager with the Pueblo County Historical Society, said Wednesday. The levees broke later that evening and the water swept into downtown, home of the train depot, many vibrant businesses, and low-lying and dense immigrant neighborhoods.

“The house struck a building while water swirled around it sucking it down,” Cannon’s first person account featured at the Pueblo Heritage Museum reads. “Finally it stopped and the woman, having evidently lost her mind, leaped into the water and was drowned.”

Pueblo’s train depot was flooded in early June 1921 when the Arkansas broke its levees and swept into downtown. The floodwaters lifted and carried train cars through town. The depot still stands as do many of the historical buildings.

In the wee hours of June 4, the Fountain River flooded as well, according to “Mad River,” a book about the flooding just released by the Pueblo County Historical Society. The Fountain washed away bridges and cut off the east side of town.

The number of people who died in the flood is unknown, “Mad River” states, in part because the town’s mortuaries were unreachable. Some people were also likely swept downstream and never found, McGinnis said. “Mad River” lists at least 123 people who died and cites Red Cross estimates that more than 7,000 residents were left homeless.

Pueblo Mayor Nick Gradisar marked the anniversary of the catastrophe Wednesday standing in front of the placid downtown Pueblo River Walk, a man-made water feature that flows in the former bed of the Arkansas River. He recalled the immigrants who came from all over the world to work at the steel mill, Colorado Fuel & Iron Company, and lost everything in the deluge.

“We should be inspired by their fortitude and their resiliency,” he said.

A boat with sightseers cruises through the Pueblo Riverwalk on Wednesday, June 2, 2021. In 1921, the area would have been flooded under 20 feet of water. (Photo by Jerilee Bennett, The Gazette)

Flood survivors faced human and animal corpses floating in the water, millions in property damage and a long road to recovery. Fire added to the economic pain that “Mad River” states was close to $25 million after burning lumber was carried by the flood water to other buildings.

The flood hit as Prohibition was getting started nationally, but Pueblo collectively needed a drink. Federal officials lifted the alcohol ban for 30 days after the catastrophe with the reason cited as helping combat disease. Frank J. Medina, federal prohibition director of Colorado, sent 50 gallons of whiskey to the city for medicinal purposes, according to a Pueblo Heritage Museum display.

At the time, Pueblo was Denver’s closest rival and politicians from the steel town were blocking Denver’s attempt to build a tunnel essential for a new east-west rail line. After the flood, Pueblo politicians had to strike a deal with Denver to form a conservancy district to rebuild levees and in return they allowed the Moffat Tunnel connecting Boulder and Grand counties to get built, opening up a westward route from Denver, Banner said.

“That basically decimated the rail business, everything went west from Denver, that had a tremendous economic impact,” he said.

Pueblo city fathers were left with an incredible mess they never wanted to deal with again.

“They said we’re going to do what we have to do so that this never happens again in all of time,” he said.

The conservancy district rerouted the Arkansas River so that it would be bounded by a bluff to the southwest and then built a levee 2.5 miles long on the northeast bank to protect downtown. The levee had to be maintained even after Pueblo dam was built because Wild Horse Creek drains into the Arkansas below the dam, he said.

The Federal Emergency Management Agency required the levee to be rebuilt for safety reasons in recent years and it is to be dedicated by the Gov. Jared Polis Thursday.

Banner said he expects the new levee could be a key attraction in Pueblo because its top was lowered and widened, and will provide an additional river walk through town. In addition, a new pedestrian bridge now crosses the river just downstream of the 4th Street bridge leading to new seating overlooking the kayak course.

Pueblo’s new levee along the Arkansas River will also function as a 40-foot-wide path overlooking the river.

“I think the levee is going to end up being one of the major recreational facilities in Pueblo. …  we have a 2.5 mile, 40-foot wide path with no traffic lights,” Banner said.

A new mural is going up to replace the one on the previous levee that held the record as the world’s longest.

An hour-long Rocky Mountain PBS special called Colorado Experience: The Great Pueblo Flood will air Thursday to mark the anniversary. The film will also be available on Youtube. Artifacts and first-person accounts from the flood are on display at the renovated Pueblo Heritage Museum at 201 W. B Street that reopened Wednesday following the pandemic.

Lucky, a hemp mache horse, survived the 1921 Pueblo flood. The torrential waters carried him out of the saddlery where he served as a model miles down stream and into a tree where a farmer found him. In the 1980s, he survived a fire. He now amuses guests at the Pueblo Heritage Museum.