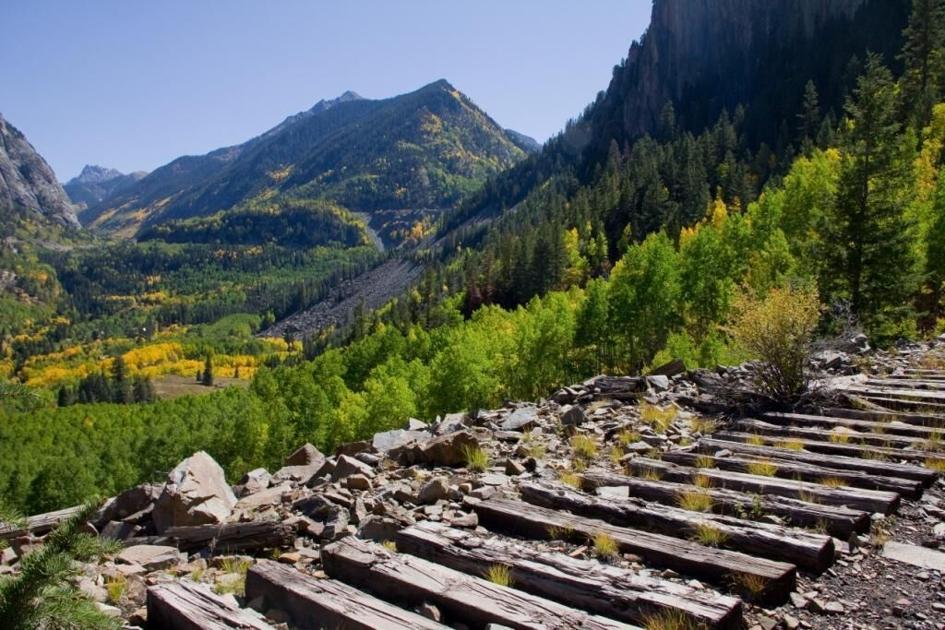 There’s a thread of pavement running through Laura Stark’s childhood memories: a link between Minnesota’s Twin Cities featuring creek-fed woods and fields and, on one end, the 53-foot Minnehaha Falls.

Stark and her family would explore by bike. “We just loved it,” she says, “and I had no idea it was a rail-trail.”

No idea until about a decade ago, when she started working for Rails-to-Trails Conservancy. Stark is a writer for the nonprofit, which promotes and protects former railroad beds that have been converted into recreation platforms.

The conservancy counts 43 rail-trails in Colorado, the state Stark now calls home. Those add up to 325 miles, according to the conservancy.

“There’s a lot of people who enjoy those trails, but they might be like I was as a little girl, where they don’t realize they’re rail-trails,” Stark says from her Broomfield home. “It’s fun when you can connect the trail experience with the history.”

Rails-to-Trails Conservancy traces the movement of these now-beloved commuter paths and scenic excursions to the 1960s.

In a Chicago Tribune letter, naturalist May Theilgaard Watts envisioned a pedestrian path following the abandoned course of the Chicago, Aurora and Elgin Railway — a path over which people would appreciate and thus preserve the fading tallgrass prairie. Thus was born today’s 62-mile Illinois Prairie Path. Also around that time came the dream for Wisconsin’s Elroy-Sparta State Trail, following the former Chicago and North Western Railway line for 34 miles.

From the Midwest, rail-trail concepts spread to all parts of the nation. Rails-to-Trails Conservancy lists 24,574 miles total across the 50 states. And today, some of the finest are being celebrated in an ongoing series by the organization.

Stark is among the team writing state-by-state features, spotlighting 10 trails in each. She and her husband recently compiled the list for their own state.

“It was really hard,” she says. “Because Colorado is, of course, beautiful.”

The Starks’ goal was to include a variety of experiences and geography, along with trails popularly reviewed on Rails-to-Trails Conservancy’s database. Here’s a look:

For the visiting athlete acclimating to the altitude — say, someone here for Leadville’s famed 100-mile foot and bike race — this paved loop isn’t a bad bet. It travels a forested hillside just above North America’s highest incorporated town, passing historic mining relics. Among rail-trails, the Starks consider it unique for its “fairly steep average grade of 3%.”

The average grade on this one? The Starks note it as 45%. Soaring to the sky just shy of a mile, the former scenic railway was delisted by law in 2013. That opened the door to a massive exercising fan base and over-their-head tourists from everywhere.

Listed in former Gov. John Hickenlooper’s “16 in ‘16” initiative, which prioritized trail projects around the state, the vision is a total 65 miles touring iconic scenery, rising from the Denver metro area to Loveland Pass. The pavement currently spans Clear Creek Canyon, along an old Colorado Central Railroad stretch. This spring, the plan is to connect to Golden’s river walk.

The Roaring Fork Valley recently earned a rare “gold” designation by the International Mountain Bicycling Association. That was for the dirt singletrack all around. And that was for this ribbon of pavement, which is popularly descended for a breezy 2,000-plus feet from Aspen to Glenwood Springs.

Pre- and post-work crowds take segments through some of Denver’s busiest corners, including Confluence Park, which recognizes the gold discovery that put the city on the map. The route follows the cascading life source that gave rise to bridges and buildings before escaping to the open countryside out east, ending in Franktown near stunning Castlewood Canyon State Park.

Dog walkers, runners and cyclists pick their portal between Palmer Lake, Monument and the Air Force Academy. The reward is fresh air away from Interstate 25 bustle — along with open views of Pikes Peak and Rampart Range stretching as far as the eye can see north to south. Bordering the trail on the Palmer Lake side is not-yet-available Santa Fe Open Space, named also for the Atchison, Topeka and Santa Fe Railway.

An e-bike meet up group takes the Santa Fe Trail to Palmer Lake in 2017.

In summer and fall, you’ll catch glimpses of passengers on the Durango and Silverton Narrow Gauge Railroad. And if you know anything about that train, you know about the eye candy along this adjacent trail. Durango considers this its community backbone, connecting downtown with neighborhoods and parks and open spaces.

Golden aspen groves, wildflower-splashed meadows and the vertical beauty of the San Juan Mountains were once roamed by trains on a hair-raising, narrow-gauge track between Silverton and Durango. Now that’s all admired by hikers and mountain bikers. But they know not to get too distracted along these cliffs and trestles above 10,000 feet.

One might start with a bite to eat in downtown Steamboat Springs before hopping on the Core Trail, on which the senses will be satiated: the sound of the running river; the wind between the cottonwoods; and the sulfurous scent of mineral hot springs. Yampa River Botanic Park is a must-stop, with an array of colorful gardens and ponds.

The trail follows the banks of the mighty Colorado and boasts humbling vistas of Colorado National Monument’s red rock walls to the south of Grand Junction. It’s a splendid tour of this magical valley, traversing peach orchards of Palisade and Western Colorado Botanical Gardens, as well as the bird paradise of Audubon Nature Preserve.