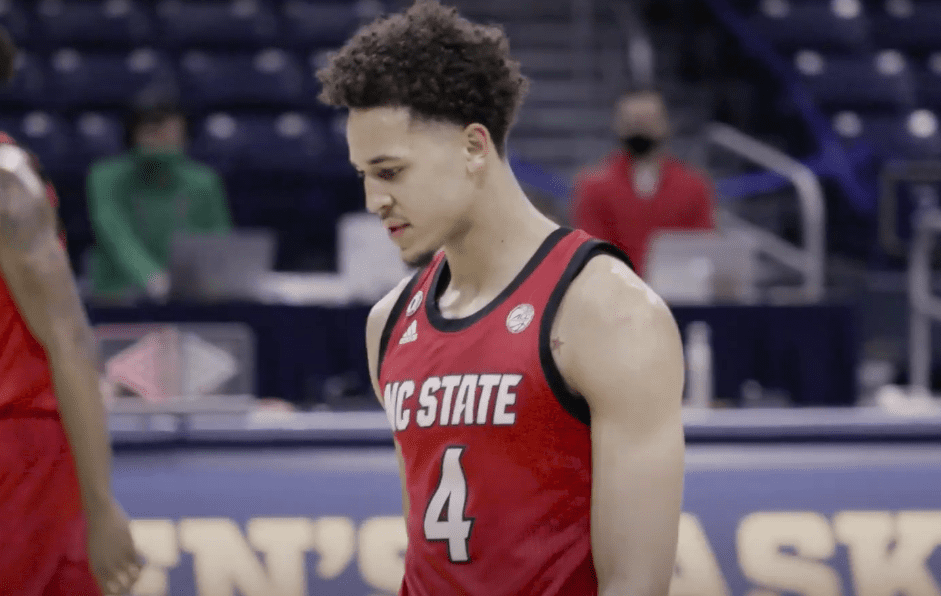 Well, folks, that’s a wrap on the most annoying season in the history of college basketball.

Between the COVID pauses, the contact tracing, and zero fans. This season sucked.

Look, I know a lot of you are pissed off that State lost and it’s over. I was too, but as you can see this article didn’t come out the night of the loss, or the day after the loss. I needed some time to simmer. Some time ‘rational brain’ to kick in.

In a season where you had your best player and vocal senior-leader, Devon Daniels, go down with a knee injury, and a couple weeks later you lost your other upperclassman starting guard (Allen), and then your other senior guard can’t even sit down on the bench when he comes out because of his back (Beverly), and then all of your fill-ins for these guys are freshmen, and freshmen didn’t get an offseason to train with the team like usual….well, then you probably expect an absolute sh*# show of a record.

When you consider all of that, 14-11 overall and 9-8 in the ACC doesn’t really seem all that bad. I mean, the record could have been worse had they not recovered from that stretch where they lost 8 of 10 with a COVID pause and a Devon Daniels knee injury in the middle. But they did. They closed out their season winning 5 in a row. Beating #15 UVA and winning at Notre Dame.

I’d be signin’ a different tune if everyone had been healthy and State finished with this record, but the series of unfortunate events exposed the fallout from a larger set of factors (COVID protocols) that just set the stage for a catastrophe.

But we didn’t see a full-on catastrophe. We saw a team that fought hard every night. They were reliant on freshmen, and they looked like it. Some good nights, and then with no rhyme or reason, some bad nights. This season wasn’t a failure. Now, it wasn’t a roaring success either, but personally, I’m scrapping this year. Aside from the experience, you were able to get your freshmen, there’s really not much to learn from those last 5 months.

So flush it, and move on.

And that is the eloquent transition to me looking back on what the h*ll happened Thursday night vs. Colorado State.

NC State had the advantage…or did they?
On paper, this was a win. I don’t care what the advanced metrics said, the Wolfpack had a physical advantage at almost every single position. In fact, the only area where Colorado State had State beat was experience at the guard position. That was because 30 minutes prior to the tip, senior guard, Braxton Beverly was a late scratch, leaving Hayes, Moore, and Seabron as Keatts only options at guard.

Think about it. In what world did Keatts think this would ever happen? How could he have planned for this? When the Season began you had Beverly, Thomas Allen, and Devon Daniels as your 3 prominent ball handlers. All 3 were upper classmen, all 3 can shoot it and all 3 have been around long enough to be able to control pace and make decent decisions.

He had none of them.

And that was all Colorado State needed. You can be taller, stronger, faster, and more athletic, but basketball games are won and lost at the guard position. Limiting turnovers, controlling game pace, setting the tone defensively, setting up your teammates, and making sure your team gets good shots. None of those things show up in the box score, but they are the real difference between winning and losing.

Hitting shots didn’t bail them out
Out of the gate, NC State looked great. They were executing their gameplan and getting the ball to Funderburk and Bates. It looked like it was going to be a massacre. The Wolfpack defense was limiting lane touches, contesting 3s and the Rams couldn’t hit anything. But midway through the first half things changed.

Colorado State started daring the Pack to shoot it. They sunk their guards down bit to stop the entry pass. They were giving the Wolfpack open 3s. But with all 3 of their shooters gone, they had to rely on Hellems and the freshmen.

I don’t have to get too into it here, but these guys just couldn’t hit. Hellems was way off all night (despite willing his way to 16 points), and the freshmen combined to go 1-11 from beyond the arc. So that’s it, that’s how you lose. To win in this game you have to put the ball in the net. They were literally packing the paint and letting State beat them from 3. But State couldn’t hit.

Everyone on social media crying bout them not getting the ball to Funderburk needs to go watch the film. They DID try to get it to Funderburk and it’s why they had 17 d*mn turnovers. The defense was sinking down, waiting for that pass, and State kept making it. And they kept making it because they couldn’t buy a 3 all night.

Defense didn’t step up
The defense actually wasn’t bad. As usual, State played hard, but the defense wasn’t good enough to make up for the inability to hit 3s. As the game wore on, you could see the legs tiring. You could see the Ram guards (Stevens and Moore) start to be able to take advantage of.some switches and find open looks. You saw David Roddy’s frame start to wear down Funderburk a bit as eh got more physical as the game went on.

The Pack outrebounded Colorado State 36-31. They beat them on the offensive glass 9-6. They even shot better than them from 3 (somehow), 22.7% – 13%. But as we said in our keys to the game, NC State needed to disrupt the Colorado state guards and make them turn it over, and they needed to stop Roddy from getting off.

They didn’t do that and now the season is over.

I’ll have a full-season recap, a look forward to next year, and a lot (and I mean a lot) of roster coverage. With the ability for seniors to come back, the transfer portal is going crazy and NC State is going to bring in a guy or two, or three that might change the look of this team next season. I’m going to be covering that and, as always, giving my opinion on all of it.