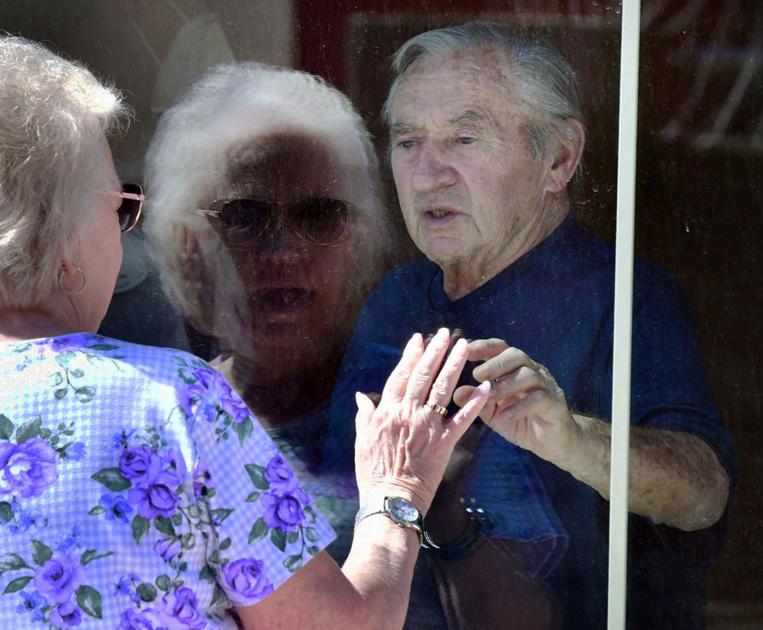 As soon as Bill Perrett spies his wife, Sally, outside the big sunroom window of Springs Ranch Memory Care center, his face lights up and his lips stretch into a smile.

Sally doesn’t head for the center’s front doors, but to the window, getting close and peering in until she can see her husband’s face beyond the reflection of her own.

There he is. There’s her Bill.

To keep the residents at Springs Ranch Memory Care Community safe from the COVID-19 virus, loved ones can need to visit them from the other side of the glass. Bill Perrett breaks into a smile when he sees his wife, Sally Perrett on the other side of the glass. But after guidelines forced families from entering, the center started having family visit times in their sunroom with a window for protection between them. Monday, April 27, 2020. (Photo by Jerilee Bennett, The Gazette)

“Hey baby, say something to me. Can you wave at me?” she says, pausing between each question, each statement, and studying Bill’s face to make sure her words have been received.

Other from a few video visits, this window moment, on a sunny Monday afternoon in late April, is the first time the Perretts — who will celebrate their 53rd anniversary in May — have seen one another in almost six weeks. The coronavirus crisis has left them visiting through panes of glass.

“Want me to do a little dance? A happy dance?”

Bill, 81, was diagnosed with dementia 11 years ago after he suffered a hemorrhagic stroke. He came to the center in east Colorado Springs for day programs before becoming a resident in August. Sally, 76, says she visited him “every day,” until the pandemic led care facilities such as Springs Ranch to restrict visitors in mid-March.

“After they closed the doors … that was the last time I saw Bill. Before that, we hadn’t spent very many days apart,” Sally says. “I asked him, did he understand about the virus and he said yes. He does have understanding, but he doesn’t speak. I can talk to him, but he can’t talk to me.”

Even so, Sally says she knows what he would say if he could.

“After you’ve been married this long, you know what the other person is thinking, if they’re happy, if they’re not happy,” she says.

The face of Sally Perrett is reflected in the window as her husband, Bill, looks up at her with a smile Monday during a visit at Springs Ranch Memory Care and Independent Living Community.

“This was … a beautiful moment. It’s a wonderful thing to see your person, in person, even if it’s through a window.”

“Sometimes we are worried about residents seeing them (family) in the window and getting upset they can’t come through the window,” Stephens said, adding the facility is, to date, virus-free. “With dementia and Alzheimer’s … sometimes it’s hard for patients to understand why they can’t come into the building.”

So far, she said, there have been no issues and “everyone’s been doing great.”

For the families, the visits can provide reassurance that their loved one is doing OK.

Now that field trips and other excursions to restaurants and museums aren’t happening, the 37 residents of the memory care center need experiences that will continue to stimulate them, Stephens said. Virtual tours and activities are filling some of that gap, but it’s not the same as engaging with loved ones, even if those experiences happen via screens — computer or window.

“That connecting is very important, especially with dementia and Alzheimer’s,” Stephens said. “Especially when they see family members, it brings up memories, and reminiscing is very important. Also, you don’t want them ever to think that, all of a sudden, someone just stopped showing up.”

Before the coronavirus crisis shut the doors to visitors at Springs Ranch, Jerriann Hance, 73, was there every night to feed dinner for her husband, Danny, and watch “Wheel of Fortune” and “Jeopardy” with him.

When that became impossible, Jerriann’s biggest concern was that Danny, 77, would “disconnect” in the weeks, and perhaps months, before it would be possible to get back to their old routine, she says.

“Part of his dementia is what he sees doesn’t process,” she says. “As hard as it is, we just get through it. I think they take very good care of Danny, and he is as happy as he could be, and he’s safe. We talk every day during the week, and once on the weekend with the video. Then we thought we’d try the window visit … and that’s working pretty well.”

Monday afternoon was her third window session with Danny, and daughter Jennifer, 46, was there, too.

Jerriann gets Danny on the phone and puts her cell on speaker so she and Jennifer can be part of the conversation.

Jerriann asks Danny if he remembers how long it’s been since he founded the business his children now run, Dan’s Auto Inc.

About 10 minutes into the visit, Danny announces it’s too hot out. Why don’t they come inside?

Jerriann says she can’t, but promises they’ll be together again soon. She presses her palm against the glass, and Danny does too, as they say goodbye.