Who Are The Tarahumara? – Entheology.com 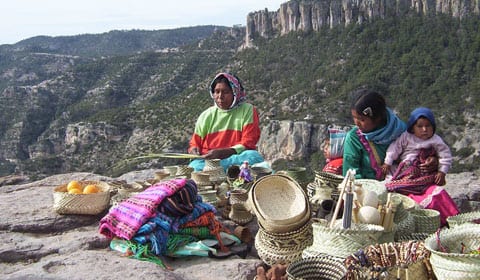 In the summer of 1993, two of our California Native guides, Doug Stewart and  Lynn Reineke, escorted a small group of Indians from the depths of Mexico’s Copper Canyon to Leadville, Colorado, where they astounded the world of marathon racing by coming in first, second and fourth place in a 100 mile ultra-marathon race, wearing their native garb and sandals made out of discarded tires.

Who were these strangely-dressed people, who came from obscurity to outpace hundreds of experienced runners?

They call themselves the Rarámuri, the Runners, and they inhabit the rugged and remote area of mountains and canyons in Mexico known as the Barrancas del Cobre or Copper Canyon. They are known to the outside world as the Tarahumara.

No one knows how long the Tarahumara have lived in their rugged homeland. Archaeologists have found artifacts of people living in the area three thousand years ago, but it is not known if they were the ancestors of the present day Indians.

There is no recorded history of the Tarahumara prior to the coming of the Spaniards in the sixteenth century. Their first European contact may have been with Coronado’s expedition as it passed through the Sierra Madres searching for the legendary Seven Golden Cities of Cibola. In 1607 the Jesuit missionary Father Juan Fonte established the first Jesuit mission in their territory.

During the next one hundred and fifty years, the Jesuits built twenty-nine missions and introduced the Indians to Catholicism, domestic animals, the plow and the axe. Their influence came to an abrupt halt in 1767 when the King of Spain expelled their order from the New World. The Franciscans took over from the Jesuits, but their influence on the Tarahumara was minimal and the Indians were pretty much left alone until the Jesuits returned in 1900.

The Tarahumara have traditionally lived in isolated family units and small settlements. The Spaniards tried to bring them into more concentrated communities but the strong-willed Tarahumara managed to resist these efforts, and today a large number still live in small, isolated groups. During the time of the Jesuits, mineral wealth was discovered in the region and many Indians were forced to work as slaves in the mines. This and the encroachment of the Spaniards upon their lands, led to many bloody revolts throughout the seventeenth century.

Today the Tarahumara number around 50,000. They still inhabit the same region they have for centuries—the rugged Sierra Madre Occidental of northern Mexico. They live in caves and small wood or stone cabins and practice subsistence farming. The majority practice a form of Catholicism liberally inter-mixed with their traditional beliefs and ceremonies.

Among the peoples of North America, the Tarahumara are considered to be the most primitive, the least touched by modern civilization. They are also the most unmixed of any of the Indian tribes of Mexico.

Many of the men and most of the women still dress in their traditional styles. The ladies wear wide multiple skirts, full sleeved blouses, a head band or bandana, and a shawl for carrying a child or other objects on their backs. The little girls dress the same as their mothers and often carry a little brother or sister on their backs. The men wear a breech-cloth held together by a wool girdle wrapped around the waist, a cloth head band, and a loose cotton shirt.

Running up and down the steep canyons is an important part of the Tarahumara culture, not only as a means of transportation and communication in this rugged area, but as a sport in which villages compete against each other. From the time they are small children the Tarahumara take great pride in their running skills.

In the Rarámuri philosophy, respect for others is of prime importance. They give greater value to persons than to objects, and business matters take second place to respect for human beings. On our monthly trips through Copper Canyon we also learn to respect other people, especially the Rarámuri, as we meet them, discover their unique culture and perhaps adopt some of their philosophy into our own lives.

Who Are The Tarahumara?