What to know about acclimating to Lake Tahoe’s higher elevations | SierraSun.com 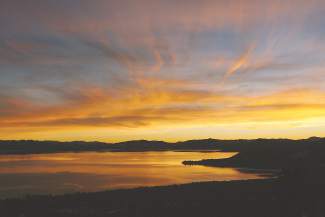 LAKE TAHOE — Visitors to Lake Tahoe most likely come here from lower elevations; in fact, many visitors come from the coastal areas of California — essentially sea level. The change in altitude causes some physiological responses in the human body.

Less oxygen is available at higher altitudes, due to the lower air pressure, because the air molecules are farther apart.

The lack of oxygen stimulates the kidneys to release a hormone that promotes the growth of red blood cells, which are responsible for delivering oxygen to the body’s tissues.

When we go up in elevation, the lower oxygen levels are detected by the carotid bodies, sensory receptors that run along both sides of the throat. The breathing rate increases, the heart beats faster and non-essential bodily functions are suppressed.

Some people may experience fatigue, loss of appetite, headache and difficulty concentrating. Symptoms will fade as the body adjusts and many might not even notice the effects due to the adrenalin rush of being on vacation and having arrived at beautiful Lake Tahoe.

The best thing to do upon arrival is engage in light activity, drink lots of fluids, avoid alcohol and eat plenty of carbohydrates.

Recommended Stories For You

Lake Tahoe sits at 6,200 feet in elevation, where there is about 20 percent less oxygen per breath than there is at sea level. For those coming to Lake Tahoe from sea level, it will take three weeks for the body to fully acclimate, as every 1,000 feet requires 3.28 days for acclimation.

BLAME IT ON THE ALTITUDE

I recently went camping at a mere 1,000-foot elevation gain from my native elevation of 6,200 feet. I was excited to be there, quickly unloading the car, then setting off down the road to visit my favorite camp host. I definitely noticed that my legs felt heavy, like I was trying to move through molasses.

I’m an avid walker, usually clocking at least 4 miles daily, yet still I felt the effects of the small elevation gain. By the next morning, I was up to my usual walking speed and strength. Even though I hadn’t fully acclimated, this is an example of a short-term adjustment which allowed me to function normally.

While Lake Tahoe is considered to be high elevation and certainly is higher than most communities in the United States, there are places with dramatically higher elevation.

In the United States, Leadville, Colo., is the highest city at 10,152 feet. Colorado towns of Montezuma and Alma are higher at about 10,350 feet.

For extremely high living, travel to La Rinconada, the highest city in the world, located in Peru, at 16,700 feet. Tibet has four cities above 15,000 feet.

The highest mountain is Mount Everest in the Himalayas, at 29,000 feet, above the threshold of 26,000 feet, where one enters what is known as the Death Zone. Above 26,000 feet, the human body cannot acclimate and will eventually succumb without supplemental oxygen.

The body functions most efficiently at lower elevations, including better digestion, increased strength and endurance, and memory capability is enhanced. So the next time you forget something, you can blame it on the altitude.

However, people who live permanently at high altitudes have a slightly longer life span and tend to carry less fat.

High altitude affects more than just our bodies. Cooking and baking practices are affected, as anyone knows who enjoys baking cakes and bread.

Recipes for cooking and baking need to be adapted for a couple of reasons, one of which is the boiling point of water. At sea level, water boils at 212 degrees. At 6,000 feet, it boils at 201 degrees. This causes the liquid to evaporate more quickly, which causes the sugars to become more concentrated, leaving cakes more prone to sticking, among other unintended results.

Since higher altitudes come with lower air pressure, baked goods will rise more quickly, causing unstable pockets of air. If these pockets become too large, they burst, and the cake or bread collapses.

To combat these effects, it is necessary to add flour to cakes, decrease the sugars and fats and add more water. When baking bread, slightly reduce the amount of yeast.

The air pressure in your vehicle’s tires is also affected. At higher altitudes, there is less pressure on the outside of the tire, so you want to let out some air.

However, if the increase in altitude is accompanied by a drop in temperature, which it often is, they may balance each other out. It can’t hurt to stop in at one of the service stations around the lake and have it checked.

Toree Warfield is an avid nature lover, and writes this column to teach and stimulate interest in the marvels that surround us. She derives information from various professional and media sources for her columns. See her website at saveourplanetearth.com to read columns and to find links to bird song recordings, additional photos and other content.

What to know about acclimating to Lake Tahoe’s higher elevations