What Is Trump Without His Crowds? – POLITICO 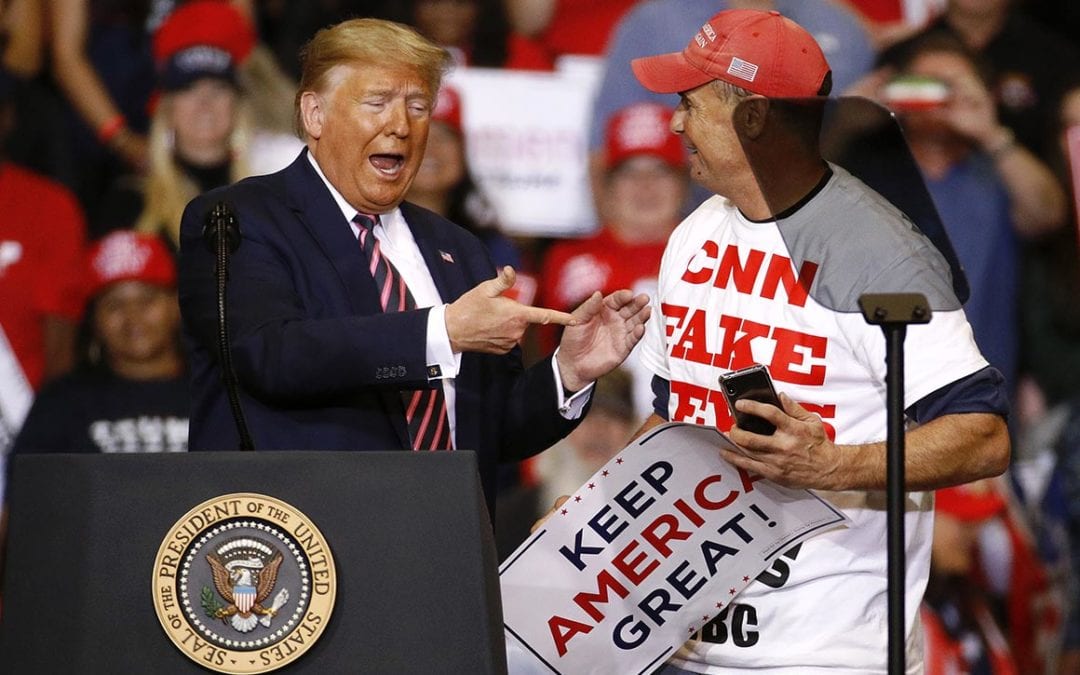 All of a sudden, we live in a world without crowds. And for Trump, it’s an existential threat—as much a threat as a sinking economy or the virus itself. Because Trump doesn’t just love crowds. He needs them. He needs crowds because of their political utility. Needs them to mine “data gold.” Needs them to be rolling, roiling, visceral focus groups—listening to the ebbs and flows of their roars, serving them what they want, scrapping what they don’t, stoking support with a skilled evangelist’s call and response. He is, after all, at his best and most effective riffing to the rank and file as opposed to monotonously reciting from a teleprompter all alone in the solemnity of the Oval Office. And he needs crowds, too, and perhaps most importantly, on account of psychological necessity.

“They are his lifeline,” Bandy Lee, a Yale University psychiatrist and the editor of , told me this week. “He’s very good at this,” she said, referring to the catalog of his performances at his rallies, “because his life depends on it, not just the life of his presidency but the life of his psyche.”

In the estimation of Lee and other experts of her ilk, as well as the many people who have known him and worked with him for years, the way Trump is ties back to the way he was raised. The “complete emptiness inside,” the “bottomless void” that “can never be filled,” the “psychological defects” and “pathologically narcissistic traits”—all of this, says Lee, is a result of the core particulars of Trump’s upbringing: his distant and demanding father, the disruptive near-death experience of his mother when he was just a toddler, his banishment to military school when he was barely a teenager.

“The lack of love translates into desiring accolades,” Lee explained. “And the rallies are really the most critical crutches that he’s had. He needs his followers more than his followers need him.”

“The crowds,” former Trump casino executive Jack O’Donnell told me the other day, “get him through the night.”

Starting in the 1970s and ‘80s, the foundationally lonely Trump cultivated transactional relationships with reporters and gossip columnists, in the same manner as his mentor, Roy Cohn. At times, he used a fake name to do his own PR. He decorated the walls of his office with magazine covers bearing images of his own face.

In Atlantic City, at his casinos, he jaunted across gaming floors, feasting on the clamor of the throngs. “They cheered him,” recalled Alan Marcus, a former Trump publicist. “In front of a big crowd, and a big crowd could’ve been 25 people or 25,000 people, he can shine. Because he’s got that Trump persona. The Trump persona takes over the room.”

By the middle of the aughts, when the success of “The Apprentice” erased the stain of his personal failures and business busts of the ’90s, he obsessed about the reality show’s ratings. “Ratings,” said Marcus, “are crowds.”

And Trump’s political ascent? Implausible to the point of impossible without crowds.

In the couple years before 2015, on the precampaign campaign trail, at off-year cattle calls of would-be candidates, Trump tested out talking points. “He would put forth his position or his feelings, and he would judge the level of response,” the late political strategist Pat Caddell once told me. He monitored not internal polling but Twitter mentions and tallies of retweets. He gauged what sizzled on conservative talk radio so he could channel it back.

At his campaign kickoff at Trump Tower, when he glided down the escalator to say that he was running, the crowd was so important he paid some people to be there. The next month, he drew approximately 4,000 people to a rally in Phoenix. A month after that, the crowd was roughly five times that size in Mobile, Alabama, where he had his plane circle the stadium to a standing ovation and the wild-eyed appeal of his candidacy became hard to ignore. “Trump’s campaign,” Roger Stone would write, “was centered around a ‘set piece rally.’”

At one of them, in New Hampshire, he told the people he had lots of friends, and rich friends, but who no longer would be his friends if and when he got elected.

“You know who my friends are?” he said. “You’re my friends.”

And ever since, all the way up to his last rally, in Charlotte, on the second night of this month, Trump has engaged in an almost hypnotic version of the same, over and over again, using every one of his signature events to draw red-capped crowds, and to talk about the size of the crowds—whether or not, of course, the specifics are true—seldom missing a chance to employ the crowds and their counts as an ongoing contrast to cudgel his Democratic opponents.

“An integral, main part of the campaign,” Trump’s campaign spokesman has said.

“The driving force,” according to the campaign’s COO.

But as America shuts down, as Broadway goes dark and Disney World goes dormant and March Madness goes poof, Trump at the moment has been stripped of arguably his most potent political strength. Entering a new, utterly altered reality, mere weeks after he traveled to India to revel in the adoration of a crowd of 110,000, Trump sat in the White House at a desk called Resolute and appeared out of his element and underprepared—while Joe Biden, his presumptive opponent in the general election, stood the next afternoon in front of a bank of American flags in a hotel in Delaware and spoke to mostly just clicking cameras and seemed not frail or poorly supported but serious and up to the task. Biden’s (small) crowds and Trump’s (large) crowds hardly matter because now there are no crowds at all.

“Rallies are important to the Trump campaign, and I’d worry about losing them,” former Trump aide Michael Caputo said, “because it would tilt a bit to Biden’s advantage.”

Another former Trump aide pushed back on the premise. “It’s very early in the presidential cycle,” Sam Nunberg told me. “He’s still going to be able to hold rallies eventually, calling the guy ‘Sleepy Joe’ and making fun of him … one way or the other.”

Nunberg stressed that Trump still has television and Twitter, platforms on which he has an irrefutable record of mastery of a certain sort, and that his flush campaign is a Facebook juggernaut, too, and that he always has possessed a blithe capacity for surviving crises and skirting consequence. All valid points.

He made a prediction.

“What are your plans, Mr. President,” a reporter asked him on Thursday, “about campaign rallies?”

“I think the Democrats won’t be having rallies, but nobody shows up to their rallies, anyway,” Trump said. “So, what difference does it make?”

“My rallies are very big,” he said.

“On the rallies, we’ll make that decision,” he continued. “But at this moment, we don’t have …” He stopped himself—as if he couldn’t quite bring himself to say it out loud. “I was going to Las Vegas. … I was going to Colorado …”

He fantasized about a rally in Tampa on March 25 that reportedly was being planned but had not been publicly announced. That didn’t prevent him from dropping highly dubious details. “All sold out,” Trump said. “We have over 100,000 requests for tickets, but I think we’ll probably not do it because people would say it’s better to not do.”

“It’s like, if Don Rickles performed to a room of three people, would he have been funny? You know, insult comics, they need the energy of the discomfort they create for the jokes to work, for the act to work,” Trump biographer Michael D’Antonio told me this week. “It’s very bad for Trump to not have crowds. And I think he knows it.”