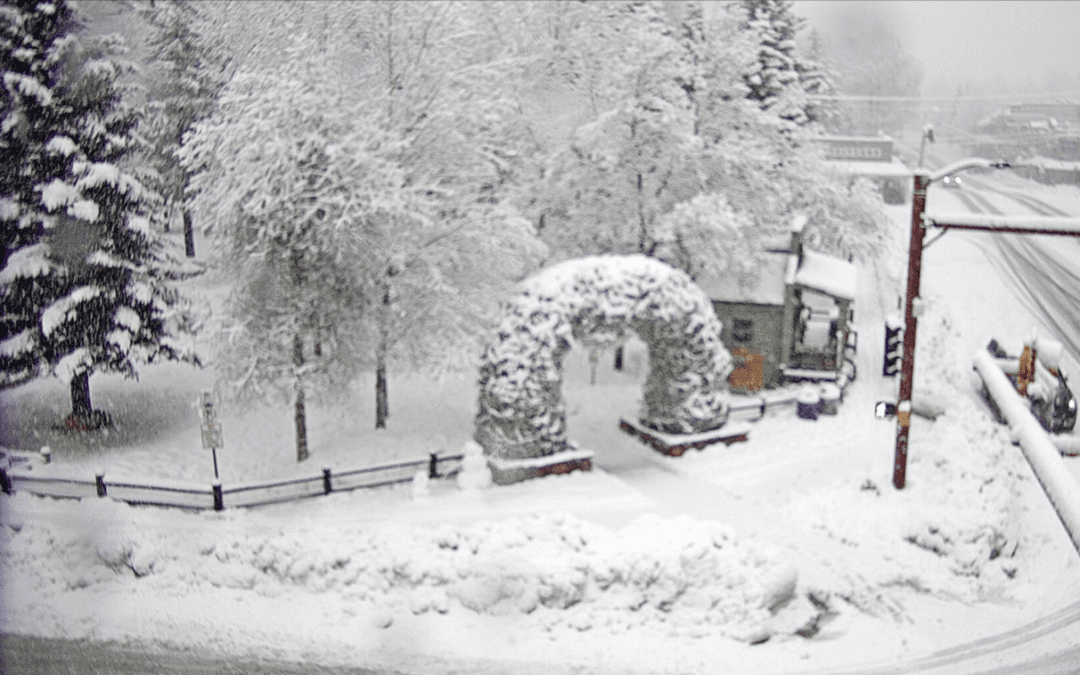 JACKSON, Wyo. — A multi-day storm system has produced huge amounts of snow across the Jackson Hole Valley and Teton Mountains, and a final surge of heavy snow is impacting the area on Monday morning as well.

As of 5 a.m., 24-hour snow totals had ranged from 8-10 inches in the Tetons, 7 inches at Snow King, and at least 3 inches in the valley, but snow accumulations have continued to add up in the 2-3 hours since then. Periods of moderate to heavy snow will continue through mid to late morning on Monday before tapering off by noon.

The map below shows the area of low pressure spinning over California, with the latest surge of moisture moving in from the south and contributing to Monday morning’s snow.

Storm total snowfall amounts since Saturday morning, so far, include a reported 31 inches at Jackson Hole Mountain Resort’s Rendezvous Bowl Plot, 20 inches at Snow King and an estimated 18 inches in the town of Jackson (13 inches reported as of Sunday morning, and an estimated 5 inches additional Sunday night/Monday morning — the town of Jackson weather station will not be reporting recent snowfall until later on Monday).

The first two weeks of March had been spring-like with a dwindling snowpack in the town of Jackson, but that has changed drastically after the weekend storm cycle.

The settled snow depths are now well above average for all elevations from the Teton Mountains to the Jackson Hole Valley floor as of March 15.

If it seems like we have had a string of good snow years in the Tetons recently, then you would be correct. This is the fifth year in a row (and sixth out of the past seven years) that snow depth has been above average at Jackson Hole’s Rendezvous Bowl plot on March 15.

As for the upcoming week, our recent storm cycle will soon be coming to an end, but the pattern will remain unsettled for the foreseeable future.

The previously mentioned area of low pressure that has been impacting our weather will slowly meander from California eastward across the Central Rockies (Utah and Colorado), and we will see additional disturbances over the next couple of days that will bring periods of snow showers to the area.

The first disturbance will bring about 1-3 inches of snow to the Teton Mountains from Tuesday morning through Tuesday afternoon, and the second disturbance will bring an additional 1-3 inches of snow to the Tetons on Wednesday morning. Wednesday night and Thursday should offer our one brief stretch of dry and mostly sunny weather this week before the next weather system arrives on Friday with more snow likely from Friday through Sunday.

Here is a look at the 5-day snow forecast for the Teton Mountains.

Jackson Hole Valley snow accumulations beyond Monday morning will be light and short-lived (MUCH lighter than this weekend) and high temperatures will warm up into the 40s each day through Thursday, resulting in rain showers at times on the valley floor. Overall, the town of Jackson will experience a higher rate of melting than accumulating snow over the next week.

Here is a look at the 7-day temperature forecast for the Jackson Hole Valley.

Be sure to follow our Daily Weather Reports for new weather updates each morning from Monday through Friday.