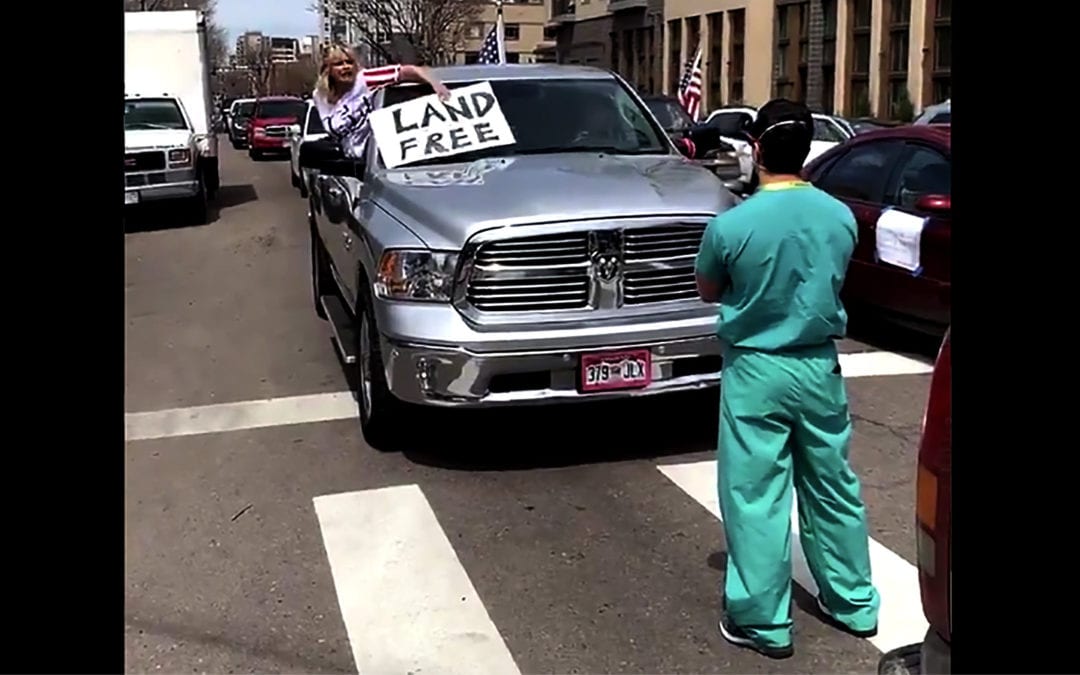 During the middle of the worst pandemic in our nation’s history, where hospitals don’t have enough ventilators to treat patients,  where the dead are being piled up in hallways, right-wing organizations have decided this is the perfect time to organize astro-turf protests. The protests have a lot of guns and plenty of Trump paraphernalia, and they are putting patients, doctors and nurses lives at risk.

Far-right activists are behind some Facebook groups pushing anti-quarantine rallies, showing that protests are being engineered https://t.co/GJKDKB9g3q

While the rest of the sane country treats overworked healthcare professionals as the heroes they are, I want you to know that that is NOT how many Trump supporters see them.  They view them as tools of an oppressive deep state that is dedicated to making Trump look bad—because he certainly would need help with that!

As you recall with the protests of the past few days, these groups are shutting down vital roadways so ambulances and patients can’t get through. In Michigan, the “Proud Boys”, a Trump-loving hate group, literally blocked the ambulance bay at a hospital. Doctors pleaded with them to move. It did not go well.

Proud Boys blocked an intersection in front of a hospital. this is the entrance to a level 1 trauma center in Michigan. a doctor came out to plea with them to move

Nurses from a hospital in Denver were determined that this would not be repeated, so they had to take vital time from their duties to peacefully stand in a line to keep the roads clear for emergency vehicles.

The Trumpers WERE FURIOUS, and sat on their excessively loud horns while literally screaming at the health care workers. The lady screamed at the guy to go to China, because there’s always an excuse for racism.

I really hope Netroots Nation goes on as planned this year in Denver (fingers-crossed). Because I want to buy those nurses a beer. Very brave. It’s bad enough they have to work in dangerous conditions without sufficient protective gear, but now they have to deal with these morons.

Thankfully, several passer-bys gave support to their health care workers. But what an unnecessary goddamned waste of their time.  We are all in this mess because of Trump’s ignorant response that this was all a hoax designed to make him look bad, and now those Trumpers won’t even let the nurses work to save lives that they themselves put in jeopardy.

I’m sure those people will insist that they are pro-life and Christian. They are neither. They are pro-death and evil. That one ignorant lady screaming at the nurse about the “land of the free” doesn’t even care that Trump just declared himself a dictator.

When many of these Branch COVIDians contract the virus, the nurses standing out there protecting patients will no doubt be putting themselves at risk to treat them. Because that’s what f***ing heroes do.  They deserve our respect, not this asshattery.

But also, damn they are bad ass!

UPDATE: Monday, Apr 20, 2020 · 1:02:34 AM Eastern Daylight Time · SemDem
Mike Detmer, GOP candidate for MI-8, is challenging the Democratic incumbent, Elissa Slotkin. The district is R+4. Detmer actually took selfies with the Proud Boys during their #OperationGridlock. Just pointing that out while I give her campaign website: elissaforcongress.com