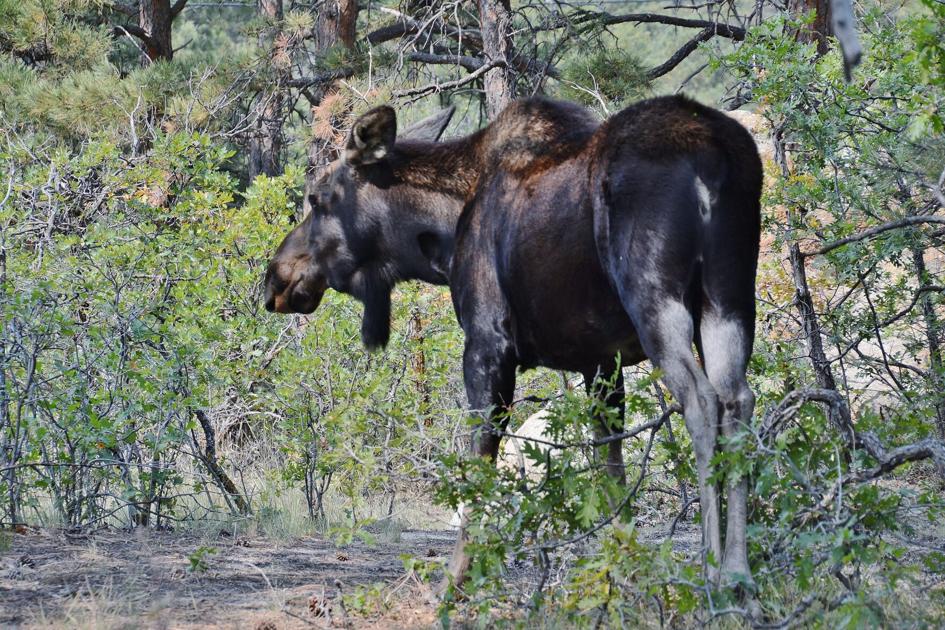 Talk about a moose on the loose.

A cow moose estimated to be about 650 pounds crossed six lanes of rush-hour traffic Friday morning in Colorado Springs before it later wandered into Palmer Park and was tranquilized, captured and relocated to the mountains west of town by Colorado Parks and Wildlife officials.

After two hours of tracking, Colorado Parks and Wildlife Officers Aaron Berscheid and Corey Adler located a 650-pound cow moose Friday that had found its way into Palmer Park in Colorado Springs. The officers darted the moose with a tranquilizer; the animal was later loaded into a trailer and relocated to Teller County west of the Springs. COURTESY COLORADO PARKS AND WILDLIFE

The moose, thought to be 2 years-old, was first spotted about 9 a.m. Thursday in Monument Creek, behind the University Village Colorado shopping center northwest of Nevada Avenue and Garden of the Gods Road, according to Parks and Wildlife spokesman Bill Vogrin.

About 7 a.m. Friday, reports came in that the moose had been seen again, managing to cross six lanes of North Nevada near the Trader Joe’s grocery at University Village, Vogrin said.

Around noon, a woman saw the moose in the dog park in Palmer Park a few miles to the east and called Colorado Parks and Wildlife.

Officer Aaron Berscheid, armed with a tranquilizer gun, led an effort to track the moose through heavy brush — measuring hoofprints and hiking miles with Parks and Wildlife staffers, according to a series of tweets from the agency.

WATCH today’s #wildlife #rescue as @COParksWildlife Officer Aaron Berscheid tracks a moose through a #ColoradoSprings park, sedates it, moisturizes its eyes and a CPW team hauls it to a trailer for transport to the mountains and its new home. #conservation pic.twitter.com/VvxDQjcy9C

After two hours, Berscheid and Officer Corey Adler found the moose, fired a tranquilizer dart and watched the animal fall asleep. They then applied eye moisturizer, hobbled its legs, hooded the moose and gathered 10 others to help carry it to a trailer, the tweets said.

Colorado Parks and Wildlife Officers Aaron Berscheid and Corey Adler darted a moose with a tranquilizer, watched it fall asleep and then applied eye moisturizer to the animal in preparation for loading it into a trailer. The animal, spotted Friday in Palmer Park in Colorado Springs, was relocated to the mountains west of town after its capture. COURTESY COLORADO PARKS AND WILDLIFE

Once it was inside the trailer, Parks and Wildlife officials removed leg straps from the moose, attached ear tags and positioned it upright. A drug was administered to revive the animal.

The moose was transported to a marsh in Teller County west of the Springs, where it walked out of the trailer and waded into a small pond.

“When they get close to people, they’re very unpredictable,” Berscheid said in a video posted by Parks and Wildlife. “They’re very large and they don’t fear humans and so if humans get too close, they can get aggressive.

A team of Colorado Parks and Wildlife employees carry a tranquilized moose into a trailer after it was found Friday in Palmer Park in Colorado Springs. The animal was relocated to the mountains west of the Springs. COURTESY COLORADO PARKS AND WILDLIFE

“With it being unpredictable and in the Palmer Park area, with all the people that do hike in and about that area, it was really important for us to get hands on her and get her to a better moose habitat area.”

Before @COParksWildlife staff left, the moose had taken a dip in the pond, climbed out and was munching willows and checking out its new home, a much more suitable habitat than in the center of #ColoradoSprings. #wildlife #conservation pic.twitter.com/uBJoG7dCuK