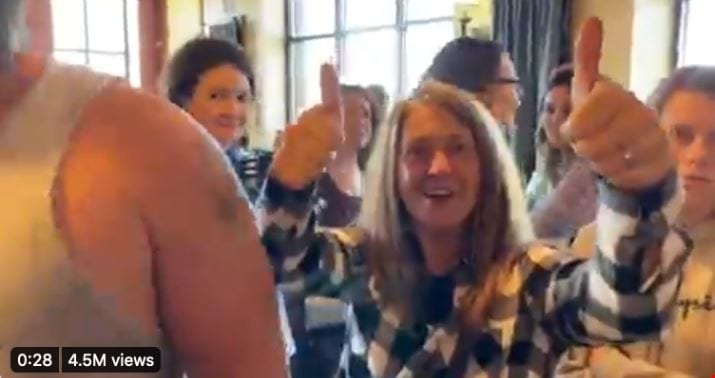 Not a single mask in sight as far as I can tell, including among the staff, although if I’m not mistaken one customer is wearing a red Trump 2020 hat. (“No mask no problem btw,” the owner reportedly posted on Facebook in advertising the reopening.) “As an epidemiologist, it’s really hard not to despair at videos and anecdotes like these,” said one doctor of the clip as it made the rounds last night.

Colorado has reopened partially but for now eateries are supposed to be limited to takeout and delivery only. “These restaurants are not only breaking the law, they are endangering the lives of their staff, customers, and community,” said the governor’s office about the scenes from the restaurant. The owner doesn’t care:

⁦@realDonaldTrump⁩ We are standing for America, small businesses, the Constitution and against the overreach of our governor in Colorado!! 🇺🇸🇺🇸🇺🇸🇺🇸 https://t.co/dfzdR7bKFe

She also complained in a post that she “would go out of business if I don’t do something,” which explains the reopening but doesn’t explain the apparent failure to take the most basic safety precautions.

That is, between the tweet and the lack of masks, distancing, etc, this feels like a political protest as much a an act of financial desperation. (“I’m so happy so many people came out to support the Constitution and stand up for what is right,” said the owner to a local paper.) The anti-lockdown protests at state capitols at least have the virtue of being held (mostly) outdoors, reducing the risk of transmission. What message is being sent by a business that’s following pre-pandemic protocols, if not outright denialism? One customer, asked why she took the risk of dining in, replied, “I’m not afraid to be out. I’m not going to wear a mask. I’m healthy. I’m in good shape, and I don’t think it’s as serious as they say.”

Stuff like this is doing the “reopen now” faction no favors. I know you don’t believe me if you’re part of that group, but go look at the polls about the ongoing anxiety about reopening too soon — although you probably don’t believe the polls either. The hard data will come after the country reopens more widely and only 75 percent or whatever of consumers return. For now, it’s enough to say that although Americans are gradually getting more comfortable with the idea of small gatherings, most are still leery of the idea. Including Republicans:

It’s not like Colorado has gotten off easy from the epidemic either. They’re in the top third of U.S. states for COVID-19 deaths per million residents.

Meanwhile in Massachusetts, a business owner in Cape Cod is running his shop correctly — and getting nothing but abuse for it, apparently, from grouchy locals.

People disregarded a rule to order an hour before pickup and demanded their ice cream anyway, he wrote on his business’s Facebook page. Customers took out their anger at delays on overwhelmed employees, including a teenage girl who quit, he said. The harassment came as employees around the country face verbal abuse and even violence while trying to navigate a new era of socially distant operations and public health precautions.

Lawrence said he would have to close back down. Now he’s doing limited orders and pondering the best way forward, according to his posts and local news interviews…

“What I have seen with my own two eyes over the past 8 weeks is that some folks are not being super careful about social distancing,” wrote the owner from Provincetown, another spot on Cape Cod that draws many tourists.

The story ends happily, according to CNN. After Lawrence’s Facebook post about how his workers were treated went viral, the public rallied to him and he was able to reopen. Reportedly customers are now following the safety rules and, hopefully, behaving better.