Underestimated but undeterred: Colorado State legend Becky Hammon is on a path like no other – The Denver Post 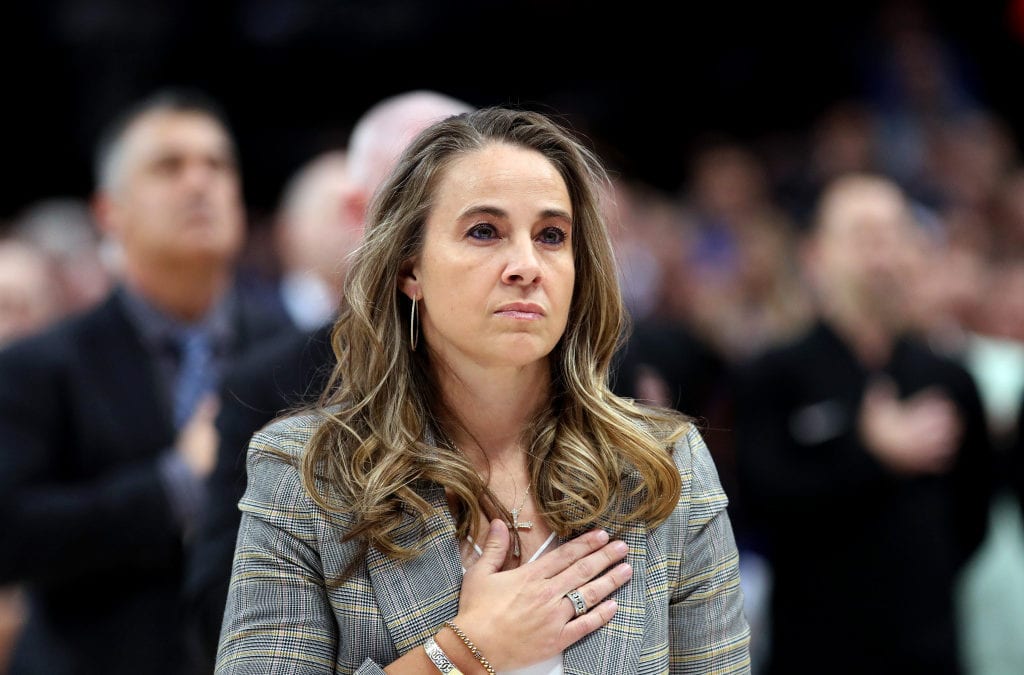 The resistance, in the form of obstacles shirked and ceilings shattered, is what makes Becky Hammon’s story special. To get to where she’s at now, as the first full-time female assistant coach in NBA history, Hammon had to carve her own path.

The unassuming point guard from Rapid City, South Dakota didn’t have any major college programs interested in her. Despite her heady play and gifted ability to finish at the rim –  born of hours shooting on the weathered hoop in her driveway –  she had a huge disadvantage standing at 5-foot-6.

But former Colorado State assistant Kari Gallegos-Doering recalled seeing her for the first time. It was at a weekend showcase in Denver, and major programs were represented.

“And so there was a kid named Nikki Weddle,” Gallegos-Doering remembered. “Everybody was there to watch Nikki.”

But Hammon, who happened to be on Weddle’s team, kept elevating her teammates and dicing her opponents. When Gallegos-Doering compared notes with another assistant coach who had watched the showcase, both were struck by Hammon’s basketball IQ.

“We were both like, ‘Who was this little player from South Dakota that was playing with Nikki?” Gallegos-Doering said. “My gosh.”

Hammon was later invited to a more prestigious showcase in Indiana, where she was selected to the event’s all-star team. Gallegos-Doering had an inkling of what might be coming, even as Hammon took on bigger-name players, including high school All-Americans.

“She’s out there making them look bad,” she said. “Putting moves on them, going to the rim, finishing the way she did, and the girls are running down the floor shaking their head.”

Proximity and comfort landed her at Colorado State, where Hammon helped turn a middling program into a WAC powerhouse, leading the Rams to three NCAA tournaments and the Sweet 16 in 1999. She owns the school’s career record for points, 3-pointers and assists, and her 2,740 points ranks first, male or female, in conference history.

Becky Hammon and the CSU women win the second round of the NCAA tournament against Southwest Missouri State Sunday night, March 14, 1999 in Ft. Collins.

Her tenure, marked by clever finishes, no-look passes and an infectious energy, helped stuff Moby Arena to capacity. As a freshman, Hammon had predicted to her teammates that they’d eventually be playing to sellout crowds.

“You look for somebody who has that hunger, just that magic,” Gallegos-Doering said. “I always said Becky has mojo. She’s just flat-out got something special. Michael Jordan has that mojo. You can’t explain it, you certainly can’t guard it. You can’t buy it. You can’t try and practice it. Some people have it, and she had it and she still has it. She’s where she’s at because of it.”

And yet the three-time All-American was still overlooked in the WNBA draft. She garnered an invitation to training camp with the New York Liberty and only survived the roster cuts after earning the respect of veterans such as Teresa Weatherspoon and Vickie Johnson.

Sue Bird, who would be drafted No. 1 out of Connecticut three years later, remembers exactly where she was when the two first crossed paths. Former Liberty and UConn star Rebecca Lobo organized a dinner that Bird attended while she was still in college.

“As a basketball player growing up in New York and seeing somebody, a professional athlete who played for the Liberty, I was almost in awe,” Bird said. “I was like ‘Oh, (wow) this is Becky Hammon.’”

That was the type of admiration Hammon inspired among her peers. With New York, Hammon went to three WNBA finals and made three All-Star teams, morphing from an integral role player to a burgeoning star. Once she was traded to San Antonio in 2007, more All-Star appearances followed and the Stars reached their only Finals appearance in franchise history. She flourished in tight spaces and her precise handle made her a nightmare to stop in the open court.

Hammon now ranks fourth all-time in WNBA history for 3-pointers made and fifth all-time in assists. Though Bird has the edge in both categories, Hammon has her enduring respect. (Hammon did not respond to numerous attempts requesting comment for this story).

“She’s someone that I think early on in her career she got underestimated, but she’s a killer,” Bird said. “I think at her size, that’s probably a big reason she got underestimated. But my favorite part of her game, I think a lot of people are going to watch her and see the shooting, which was deep and consistent, you had to guard her out there, but, man, when she got in the lane, I don’t know that there’s a player that’s more fun to watch than Becky when she would drive into the lane. You had to base your entire scouting report around that.”

“The spins … Becky’s the exact same,” Bird said. “But she was doing it before him.”

And that’s where the respect comes in. Not only did her peers – from both the WNBA and NBA – recognize her talent, but she revealed a lot of her mettle when she was left off the U.S. Olympic team in 2008. Though snubbed by her country, Hammon was already playing in Russia during the WNBA offseason and accepted a spot on its national team. She even became a Russian citizen, which, to Bird, who also played there, meant an advantage.

“I think all athletes we dream of (playing in the Olympics), and it was also a business opportunity,” Bird said.

The fact that Hammon could play as a European made her more attractive to teams because there are limits to how many Americans can play on a team.

“So, that presents even more opportunity in terms of teams, which is more money, right?” Bird explained. “You have more people who can sign you, it’s going to become a bidding war. So I think for Becky it checked a lot of boxes that made sense. She got (grief) for it, which I think was totally unwarranted.

“My favorite part of that Olympics was when the national anthem played for the U.S. (during the gold medal ceremony), Becky had her hand on her heart,” Bird said. “Becky sang along. It wasn’t that she wasn’t American anymore.”

But Russia had medaled, too. Hammon beamed at the ceremony, gripping her bronze medal with pride. She’d done it her way.

It’s fair to assume that Hammon’s breadth of experiences, in addition to her success, were what first got the attention of Spurs’ coach Gregg Popovich. A chance encounter between the two on the way home from the 2012 London Olympics started the conversation. By the end of their flight, Popovich was considering hiring her as an assistant.

While Hammon was rehabbing a torn ACL in 2013, Popovich allowed her to sit in on practices. Practices soon became film sessions, and before long, Hammon was willing to challenge Pop.

“That’s when I knew, if I had an opportunity, I wanted to put her on staff,” Popovich told The New Yorker.

Assistant coach Becky Hammon (C) of the San Antonio Spurs sits alongside head coach Gregg Popovich (R)during the first half of the NBA game against the Phoenix Suns at Talking Stick Resort Arena on Nov. 14, 2018 in Phoenix, Arizona.

In 2014, he did. This was no gimmick or publicity stunt. Popovich said he didn’t play that game.

“It doesn’t go as smoothly as they would like it to, but we had so many vets that respected her,” Green said. “Not just as a coach but as a player.”

Green, a two-time NBA champion with the Spurs and the Raptors, lauded Hammon as a coach. One of the five best he’s ever had, assistant or otherwise, he said.

“It wasn’t like, ‘Oh, this is Becky, or that’s our female coach,’” Green said. “It was like, ‘Coach, or Coach Hammon or Becky’, she’s got some good stuff, see Becky about this or talk to her about that.”

But what made her so appealing to Popovich – and to those who knew her at Colorado State and in the WNBA – is her affability. Hammon has the ability to connect.

“She’s always been the type of person that transcends,” said Gallegos-Doering. “I always said, if anybody’s going to be the barrier breaker because they can get along and know how to work with different types of people, it would be Becky. Money on it, hands down. It’s Becky.”

Added Bird: “She’s really funny…We joke about movies, but then also she doesn’t miss a beat with what’s happening around her.”

That’s an essential quality for Popovich, whose wit makes his biting tongue palatable.

“You have to do some dinners with Pop,” Green said. “But you also have to be able to take his (trash talk) and give it back. … The biggest thing is he wants to see if you can stand up for yourself, have a sense of humor and obviously be able to handle a bottle of wine. But also, understand the game, understand life and how his mind works and be able to have your own input without being scared to say something.”