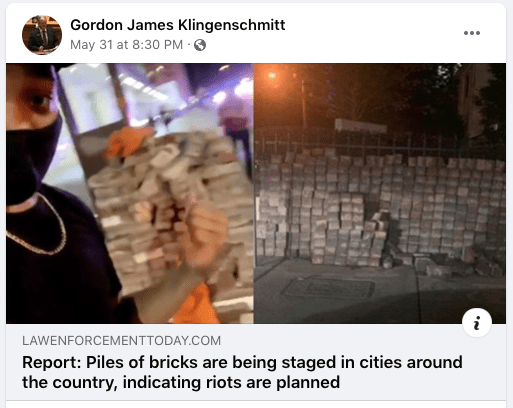 As events protesting police brutality continue across the nation, two Colorado Republicans insinuated on Facebook that the violence — the instances of looting or rioting — at some of these protests did not occur randomly and was not incited by the police presence. They implied, rather, that the violence was premeditated and encouraged by liberal donors.

These Republicans, former state Rep. Gordon Klingenschmitt of Colorado Springs and state House candidate Samantha Koch of Denver, point to videos and articles stating that piles of bricks were found along march routes at the protests and that Antifa, or possibly liberal billionaire investor George Soros, might be behind the scheme to incite violence.

On May 31 Klingenschmitt posted a link on his Facebook page to an article published by Law Enforcement Today, a right-leaning publication focused on police-related news, with the headline “Report: Piles of bricks are being staged in cities around the country, indicating riots are planned.”

“There are many who were thinking that these riots have Antifa written all over them and that appears to be getting confirmed that these riots were planned, orchestrated events,” the article stated.

Klingenschmitt represented a Colorado Springs-area House district from 2015-2017. Recently, he lost an election for a seat on the Colorado Springs City Council and failed to get on the GOP primary ballot for El Paso’s County Commissioner in District 2.

Klingenschmitt is known for his evangelical Christian television show called PIJN (Pray in Jesus’ Name) News which airs nationally on four networks and 10 online platforms. He is also known for wanting gay people disqualified for teaching because of their alleged immorality, comparing former U.S. president Barack Obama to a demon, saying that a “curse of god” led to the assault of a woman whose child was cut out of her womb, and claiming current Colorado Governor Jared Polis, a Democrat and the state’s first gay governor, wanted to execute Christians in 2014.

In response to questions regarding the veracity of the posts he shared, Klingenschmitt defended the idea that bricks were staged to intentionally incite violence in a statement to the Colorado Times Recorder.

Of the cities mentioned in the article, only the Kansas City Police Department has publicly suggested that there may be links to bricks and the violent protests. Other cities, like San Francisco, have explicitly ruled out the connection between the bricks and any orchestrated violence.

On June 3, Facebook, as part of a new effort by the social media platform to crack down on the spread of fake news, flagged the post as potentially misleading. Politifact released an analysis stating that the claims in the Law Enforcement Today article and other rumors about bricks planted at protests were mostly false.

The piles of bricks largely belonged to construction sites or homeowner’s associations.

After the article was flagged by Facebook and Politifact, Law Enforcement Today made corrections and altered much of the article.

The article in its new form still suggests there is a conspiracy surrounding these randomly placed bricks, but it does so less explicitly. The article no longer has the “Antifa” line quoted above and now ends with a concession.

“Law Enforcement Today has no information to support that bricks were left at this location for nefarious purposes,” concluded the article.

The article keeps the quotes from the anonymous Dallas Police Officers and uses the moniker “rioting thugs” as a term for protesters. Before the article was altered or labelled misleading, it was shared over 27,000 times on Facebook, according to the Politifact report

On June 3, the same day as the Politifact report ran and Facebook flagged the Law Enforcement Today article, the official White House Twitter account posted a video compiling clips of protestors around piles of bricks and clips of violent rioting from various cities around the U.S.

“Antifa and professional anarchists are invading our communities, staging bricks and weapons to instigate violence,” read the caption to the video posted by the White House on Twitter. “These are acts of domestic terror.”

The video was found by the Washington Post to be largely misleading and without direct proof of premeditated violence.

The video was deleted by the White House shortly after it was posted, but not before it garnered over 1 million views on Twitter.

“While some of the photos of brick pallets circulating on Facebook were not actually associated with protest violence, many were directly corroborated as used in the violent destructions and looting against shop owner’s property,” Klingenschmitt said.

In his statement, Klingenschmitt included a link to a news report where NYPD Commissioner Dermot Shea states his belief that the looters in New York are organizing and planning their protests to be violent. The video cited in the report was one of the clips in the White House video. The evidence is a pile of bricks found on a street corner allegedly around where looting occurred.

The video was quickly exposed as false when researchers found no acts of looting near the street corner in the video and found several construction sites nearby. In most cases, these bricks have either been stacked in piles for months or found near construction sites.

Koch, the Colorado Republican running for the state House who shared misinformation about bricks, maintained on Facebook that she was not trying to incite conspiracy theories, but her followers in the comment section continued to bring up George Soros and Antifa.

On June 4 Attorney General William Barr made the point that outside agitators were causing much of the violence around the country rather than organizers of protests. As an example, an article by NBC News cited the arrests of members of the right-wing radical group Boogaloo and the violent acts perpetrated by loosely organized left-wing radical group Antifa.

“Law enforcement officials say in many cases, people travel from other states to reach the scene of protests, then rely on informal networks to supply them with bricks, gasoline and advice on where to strike,” the article stated.

George Soros is noted for his philanthropy and for his huge donations to races up and down the ballot all across the country, primarily for members of the Democratic Party. In 2018 he backed then U.S. Congressmen Polis in his campaign for Governor. Soros’ immense wealth and frequent campaign contributions make him a lightning rod for conspiracy theories from the right, like the rumors surrounding the piles of bricks.

The video from Fayetteville has been found to be from the day before George Floyd was murdered, significantly before any protests occurred. In another article by Politifact it was reported that Soros’ alleged connection with violent protestors, including rumors spread by conservative commentator Candace Owens, was false.