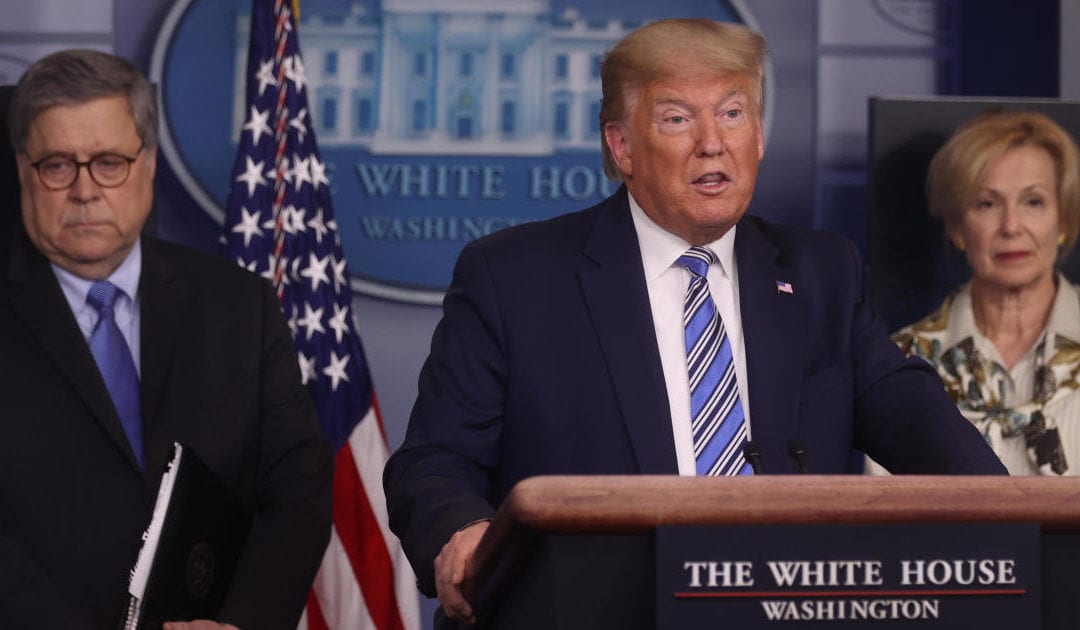 President Trump on Monday signaled he wants the economy to be back in full swing as quickly as possible amid the ongoing coronavirus crisis. He said during a Coronavirus Task Force briefing that his administration will reevaluate the 15-day guideline the White House issued last week when that time is up and he will soon issue new guidelines on how to return to a more normalized workforce and economy.

“Our country wasn’t built to be shut down. This is not a country that was built for this. It was not built to be shut down,” Mr. Trump said in a briefing that heavily emphasized the need to reopen and boost businesses and the economy. “We’re not going to let the cure be worse than the problem.”

The president’s tone Monday represented a significant shift after a week of the White House issuing dire warnings and urging people to take social distancing seriously. Only days ago, the president stood at the same podium warning Americans the outbreak could last into July or August.

Mr. Trump said Monday that the U.S. “will soon be open for business,” even as public health officials warned Americans should be prepared to continue social distancing and closures for the time being. Mr. Trump insisted the country has learned from altering habits and can “do two things at one time” — social distancing and returning people to work. He also said he thinks his public health officials aren’t opposed to the idea of easing up on restrictions in the future.

Absent at Monday night’s press conference was Dr. Anthony Fauci, the nation’s leading expert in infectious diseases. Asked if Fauci agrees with his desire to move the economy back to normal soon, Mr. Trump said Fauci “doesn’t not agree.”

“He isn’t here because we’re not discussing what he’s best at,” Mr. Trump said. Fauci is a leading expert on infectious diseases and a key member of the Coronavirus Task Force, who has made himself available for a wide range of media interviews to inform the public.

As CBS News White House correspondent Paula Reid has reported, the president wants the economy to be set into gear as soon as possible, as business closures eliminate jobs and send the stock market spiraling.

The president announced the administration is working on distributing millions of masks to the hardest-hit areas.

“FEMA is distributing 8 million N95 respirator masks and 13.3 million surgical masks across the country right now. Focusing on the areas with the greatest need, we have shipped 73 pallets of personal protective equipment to NYC and 36 pallets to the state of Washington,” the president said.

Dr. Deborah Birx, a point person on the task force, said self-swab testing will be available soon. Birx said she tested negative for coronavirus after experiencing a low-grade fever over the weekend.

The Senate has so far failed to pass procedural votes to advance a coronavirus stimulus package, while House Speaker Nancy Pelosi said she plans to submit her own proposal.

A growing number of governors are telling residents to stay in their homes and ordering businesses deemed nonessential to close their doors, ramping up the pressure on lawmakers to swiftly provide relief to those affected by the coronavirus. Mr. Trump told reporters Monday that he will be the oversight of any stimulus package.

Further adding to the tensions on Capitol Hill was the revelation that Senate Rand Paul, a Republican from Kentucky, tested positive for the coronavirus. Following the announcement, two other GOP senators, Mike Lee and Mitt Romney of Utah, said they would be self-quarantining for 14 days because they came in contact with Paul.

Republican Senators Rick Scott of Florida and Cory Gardner of Colorado were already self-quarantining due to possible exposure to the coronavirus.

In total, five Republicans are self-quarantining and are unable to vote in the Senate, dwindling their ranks.