“Too many uncontrollables”: From coronavirus to wildfires, Colorado’s hunting season brings a slew of uncertainties 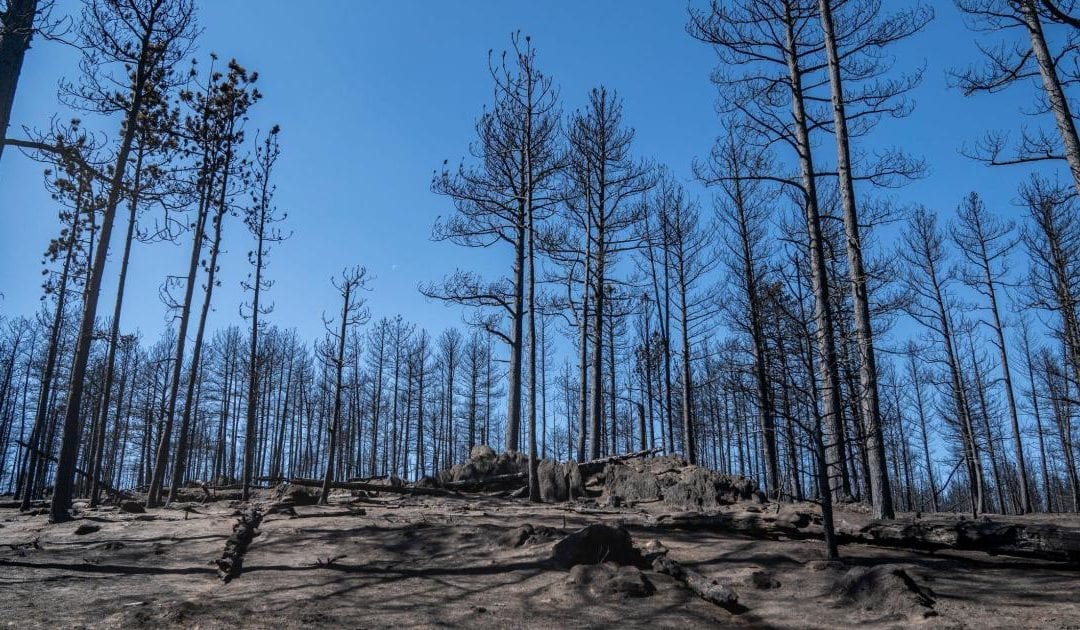 Earl Oesterling first noticed the smoke plumes of the Cameron Peak fire near his business, Ivory & Antler Outfitters, in mid-August. He knew that signaled trouble for hunting even beyond the crowds and the drought that already beset the area.

The Jackson County outfitter, located about 20 miles west of what became a massive wildfire only recently contained, had already contended with unpredictable wildlife movement due to Colorado’s dry weather as well as an influx of outdoor recreators amid the COVID-19 pandemic.

“Where you would normally have large herds of elk up here together, there’s smaller groups of elk by a lot,” Oesterling said.

Oesterling and other owners of outdoor recreation businesses are facing crises like they’ve never seen before. An increase in outdoor use because of the pandemic has brought more customers — and that, coupled with drought and land closure brought on by wildfires, has put additional pressure on wildlife.

“We’ve definitely seen a lot of changes in the animals’ behaviors,” he said. “I can’t tell you what that will do for future operations because in this business it’s all about the here and now. … There’s too many uncontrollables.”

The Cameron Peak fire, the largest in the state’s recorded history at over 200,000 acres, has severely inhibited land access in Jackson and Larimer counties, squeezing hunting groups closer together and forcing animals to flee. In the past, herds of 50 to 100 elk were common. Now, Oesterling said, you’ll mostly see groups of only five to 25, because smaller herds make it easier for the animals to find forage and water.

Then there’s the 100% statewide drought, something Colorado hasn’t faced in eight years.

“We’ve had very little moisture in our area,” Osterling said. “We are below 2 inches for the year. Normally we should be closer to 5 to 6.”

Oesterling also leases his private land to cattle operations that have had to make their own adjustments in response to these combined pressures. Ranchers who would typically let their cattle graze on National Forest land through permits have elected this year to lease land from Oesterling — which, due to severe drought conditions, has meant less feed for the cattle.

This decision from ranchers comes as the lands see an increase in people who, after months of coronavirus restrictions across the state, are desperate for outdoor reprieve. Oesterling said he has seen an increase in ATV and foot traffic in National Forest land, as well as campfires —  despite the fire bans.

“Everyone wants to be up camping and have a campfire,” he said. “It’s very good for your soul and a lot of things, but to just ignore the mandates and the things that are out there is very dangerous.”

The same issues facing Oesterling have translated to tougher hunting elsewhere in the state this season.

In south-central Colorado, between the Rio Grande and Gunnison national forests, hunter Jon Holbert saw smaller elk herds than normal this year. He lives in North Carolina but has been visiting and hunting in Colorado for much of his life. He typically hunts Game Management Unit 68 in Saguache County. This year, he saw more hunters than usual and fewer animals.

Typically he sees elk herds of 25 to 30 in that area. During his most recent trip he saw only a herd of three.

“The snow helps move the elk lower which makes them easier to find. A lot less for them to eat, of course, during a drought,” Holbert said. “Paying $670 a year (for a hunting license) kinda gets discouraging when the elk are getting harder and harder to find.”

The state sees around 375,000 deer, elk and pronghorn hunters per year with hundreds of thousands of licenses issued annually. Colorado Parks and Wildlife brought in over $112 million last year in revenue from licenses, passes, fees and permits, or about 54% of its $231.8 million budget.

But Holbert said the overlap of issues, from the influx of outdoor recreators due to the pandemic to the state-wide drought, means the state should have tightened its number of licenses to ensure quality hunting.

Crowding is taken into account when wildlife managers set license numbers and officers often hear this feedback from outfitters and other hunters as they check licenses in the field, Colorado Parks and Wildlife’s Northeast region spokesman Jason Clay said.

“Managers often have to take a longer view than just one season, however, because between the weather, natural disasters like floods and fires, and the occasional curve-ball-pandemic conditions, one year may not repeat in the future,” he wrote in an email. “And we try to manage for the general conditions, year-to-year.

“Hunters often move around in unpredictable ways, too, so that one area that a group may have had all to themselves one year could be very crowded the next, making it seem like overall there are too many hunters when it is more of a distribution issue,” he continued.  “We are actively trying to find big-picture, long-term solutions to this issue of increased use overall outside of license setting and season structures.”

Hunters wanted their money back

This year, Colorado Parks and Wildlife found itself refunding the cost of big-game hunting licenses or allowing people to roll their unfilled tags over to next season.

More than 1,000 elk and deer tags were issued for CPW’s Region 4, which includes Larimer County, 30% to 40% of which were refunded, Wildlife Manager Jason Surface said.

It can take 10 to 15 years of applying before a hunter draws a bighorn sheep or moose license, which is why those hunters were offered a voucher for their license to roll over to next year. Surface estimates that of the six sheep licenses issued for Region 4, three took the voucher. Nearly all of the approximately 60 hunters who drew a moose tag put in for a voucher, he said.

One outfitter in his jurisdiction is essentially shut down for the season because his camps are all in parts of the Arapaho and Roosevelt National Forest that was closed in October because of the Cameron Peak and East Troublesome fires. Surface expects these closures to remain for at least another six to seven months. But some of the land could remain partially closed for the next few years, he said.

Still, Surface is confident that wildlife will fare better than many may assume.

“Elk and moose and bighorn sheep, they’ve all evolved with fire,” he said. “They are a lot smarter than us when it comes to response. I wouldn’t expect any long-term issues with deer and elk.”

But Surface doesn’t know how the fire could affect the distribution of wildlife and predicts species will shift away from the fire scar for the next few years as the area grows back. And while the fires have put added stress on hunting, there are some benefits.

“Those burn areas pull a ton of wildlife in during regrowth,” said Holbert, the North Carolina hunter. “Makes the land a lot more stable also, with the new growth.”

In Garfield County where the Grizzly Creek fire burned over 32,000 acres and blackened mountainsides alongside the Interstate 70 corridor, Area Wildlife Manager Matt Yamashita said the fire has already rejuvenated parts of the environment and helped wildlife.

“It’s done great things for the habitat in regards to future deer and elk management,” Yamashita said. “(Also) bighorn sheep, we have a herd in the Glenwood Canyon area and this is going to do great things for opening up and making habitat available for them.”

Fallen timber has, in the past, restricted growth in the environment, while overgrown canopies blocked sunlight from reaching forest floors. But the flames of the Grizzly Creek fire, now 91% contained, have removed many of those barriers. Yamashita said this replenishes soil and allows more areas for wildlife to forage.

Though Eagle and Garfield counties are in states of exceptional to extreme on the drought monitor, Yamashita said in October that he’d already seen new plant growth, up to 10 inches tall.

There is good environmental news, and bad

“Nature’s recuperating and providing something that is very much needed by the wildlife resource,” Yamashita said.

But he acknowledged that the fire has not been all positive in terms of the environment. Once wet weather arrives it will deposit much of the ash and other debris caused by the fire into the Colorado River, posing a potential threat to aquatic life.

“How far stretching and how far reaching that is we don’t currently know,” Yamashita said. “A lot of it is a question mark that we’re waiting for Mother Nature to fill in the gaps.”

While he hopes any negative effects on water and aquatic life are short-lived, Yamashita said there’s no way to know for sure. He said debris caused by the 2012 Waldo Canyon fire northwest of Colorado Springs still is present in mudslides and flooding years later.

“We may be years down the road and still see some effects from what happened here in 2020,” he said.

This is of particular concern for Bernie Keefe, owner of Fishing with Bernie in Granby.

While the pandemic has increased his business, he fears the mass debris brought on by the Cameron Peak and East Troublesome fires could choke rivers and lakes.

Never in his near 30 years of guiding and outfitting anglers has Keefe had to worry about polluted waters. Operating on the clear waters of Lake Granby, Grand Lake and Williams Fork Lake, Keefe worries about how runoff might inhibit aquatic life.

When the East Troublesome fire exploded to 125,000 acres, forcing mass evacuations in mid-October, Keefe said he and his team were helping others to flee safely. He knows many people who have lost their homes and belongings, including about half of his crew.

Though he had concern for his business, which was forced to shutter for two weeks during the worst of the fire, his main attention was on helping his neighbors.

“You get into a small community like we are in Granby and you don’t really think about yourself,” he said. ”It’s been every range of emotion you could possibly have.”

By the end of October, the East Troublesome fire had destroyed over 300 homes.

“Even though it can be beneficial to the (wildlife) resource, we’re not advocating that we want to see fires touch every piece of this landscape,” Yamashita said.

With experts predicting wildfires in the future will burn hotter, faster and longer due to climate change, Yamashita said it’s important to educate communities about prevention. He also acknowledged that as fires become more unpredictable, the immediate devastation to the landscape can dampen any hopes of rejuvenation for years to come.

“We saw fires this summer in excess of 100,000 acres, something that’s kind of unprecedented and abnormal by Colorado’s standards,” Yamashita said. “Fires that are getting that large do affect a landscape and equates to fewer places that those animals have to go and retreat when they’re being disturbed.”

“You don’t last as long as I’ve lasted in this industry without being an optimist,” he said.

Libby O’Neall and Robert Tann are University of Colorado journalism students. They produced this story for CU News Corps.