To make beer slushies and beer ice cream, one Colorado brewery is breaking all the rules 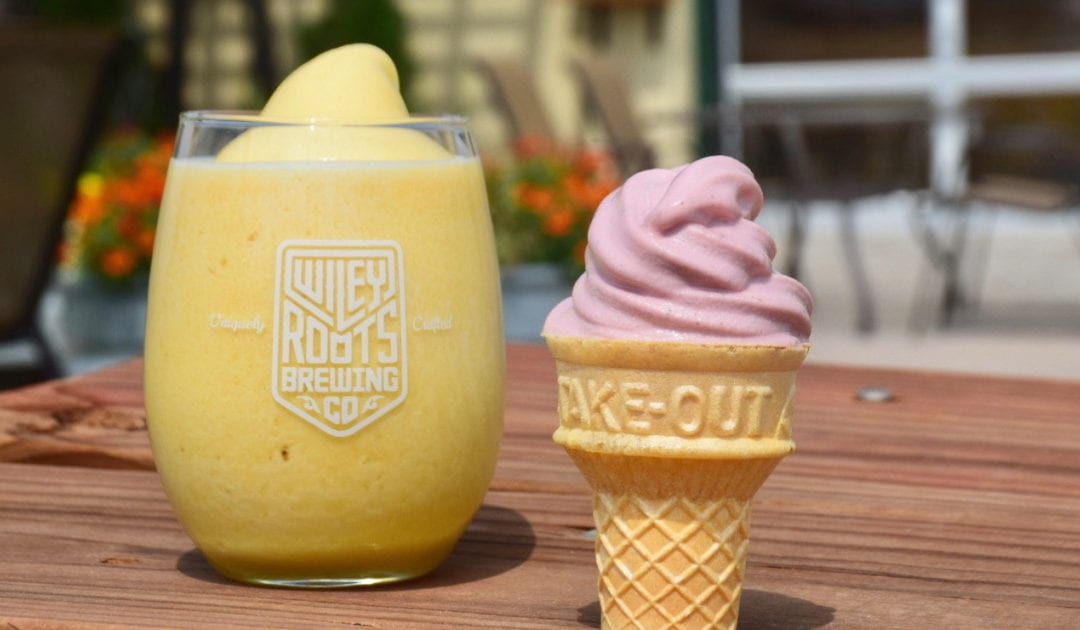 GREELEY — On a recent hot summer day at a brewery in an old warehouse perched along the railroad tracks, the drink of choice is pink, slushy and served with a Slurpee straw.

Wiley Roots Brewing calls it a beer slushie. And if it doesn’t look or taste like a traditional beer, they don’t mind.

He added: “There are no rules at Wiley Roots.”

The willingness to redefine craft beer and spurn the industry’s boundaries — all while still making classic styles loyalists recognize — is what makes the Greeley brewery stand out in Colorado.

And this week, Wiley Roots is taking it a step further with beer ice cream. The alcoholic, beer-infused soft serve called “Ice Cream Truckz” is a first in Colorado, they say.

It started as a beer that Carbaugh designed to be “the best melted ice cream.” The first edition includes pureed strawberry, caramel, marshmallow, vanilla, and milk sugar. He cranked down the temperature on a soft-serve machine to meet the challenge. “It’s pretty fun,” he said with a laugh.

The brewery says the beer slushies and ice cream are far from a gimmick — rather, it’s an attempt to lure non-beer drinkers to the brewery. “We’ve kind of started this mantra at Wiley Roots that goes something like, ‘Bring your friends that don’t like beer, and let’s change their minds together,’” said Carbaugh, who opened the brewery in 2013 with his wife, Miranda.

It’s a strategy that began more than a year ago, he said, but crystallized in the past couple months as the coronavirus pandemic put the craft beer industry in a vice grip with projections for an increase in brewery closures.

Unlike the mega-brewers with global distribution networks, small breweries like Wiley Roots rely on the local taproom experience to drive sales, but it’s impossible to replicate amid the public health restrictions designed to prevent the spread of COVID-19.

“The smaller you are the more in danger you are because, generally, those breweries rely on on-site (sales),” Bart Watson, an economist at the Brewers Association, a craft beer industry trade organization, said during a briefing in April. “Even if they’re seeing smaller declines because you make up some percentage of that in to-go (sales), that’s a huge chunk of revenue for those breweries.”

Even before the pandemic, the slower growth in craft beer — 3% in 2019, according to the Boulder-based Brewers Association — pushed breweries to diversify their products and audience demographics. In Colorado, some beer companies are moving into the cannabis beverage and wine markets. And dozens of others are now offering hard seltzer to capitalize on a national trend for lighter and low-calorie beverages.

The beer slushies are an extension of the effort to appeal to new drinkers. A handful of Colorado breweries offer them, including Baere and Fiction Beer in Denver, Four Noses in Broomfield and Something Brewery in Brighton. Most start as fruited sour beer — think strawberry limeade, piña colada, or banana orange — with sugar and sometimes more fruit added.

“We kind of do crazy for the sake of crazy,” said David Allegrezza at Something Brewery, which opened in 2015 focused on tea-infused beer but shifted its focus to trendy crowd favorites. “We just kind of push the boundaries a little bit and see if the audience accepts it — and they respond very, very well every time.”

Something Brewery took inspiration from Wiley Roots after the two collaborated on a beer, and now Allegrezza said other breweries are calling to ask how to make their own beer slushies. For a while, the brewery rented a slushie machine but the owners decided to buy one when their new patio reopened in May after coronavirus restrictions began to ease.

Since then, the brewery’s sold 3,000 slushies and made $20,000 just off frozen beer, said Allegrezza, one of the three founders. “It’s been at the top of our selling list this year,” he said.

With beer awards on the wall, Wiley Roots takes a fun new direction

The out-of-bounds approach to beer epitomized by Wiley Roots also reflects the origins of craft brewing, which blossomed as people looked for more flavorful and interesting beer.

The brewery still offers traditional styles, including two German lagers currently on draft, and won multiple awards for a traditional American wheat beer and its dry-hopped mixed-culture sour. But in 2018, Carbaugh turned a new direction after he said the brewery was taking itself too seriously trying to meet traditional style guidelines.

The debut of Slush — the base beer for the frozen slushies — represented the new focus. The moderately tart kettle sour is loaded with fruit puree and designed to mimic a drive-in slush.

Other recent beer series followed a similar formula: Take a popular beverage and make it beer. The brewery’s County Fair Cobbler series a milkshake sour IPA that is modeled off a fruit dessert pastry and the Fruit Lady beers are sours that imitate fruit smoothies.

The consistency and sugar levels make the beers unlike any others but most are just tart enough to match the sweetness. The myriad fruit combinations and additions of other ingredients, such as lactose and vanilla, don’t always find a balanced landing. But Carbaugh said he doesn’t hesitate to put the styles in front of traditional beer drinkers and say: “I don’t care what you call it, we made it. And as long as it’s good, that’s the whole goal.”

Buoyed by reactions from customers — including new ones who say they don’t like beer — to its frozen slushies, Wiley Roots pushed forward with the ice cream beer and the frozen soft-serve counterpart that debuted Thursday.

The brewery is still experimenting with the recipe — one uses a mix to make beer into soft serve and the other blends the beer with ice cream — but either way, it’s served in a cone. It takes inspiration from Swedish brewery Omnipollo that opened its own ice cream shop.

The key to the whole approach, Carbaugh said, is redefining beer — or better yet, to not worry about how it’s defined.

“For me, more broadly, beer is intended to be a beverage that facilitates community,” he concluded. “It can be so much more than that, and we just have to embrace that it can mean so many different things to so many different people.”