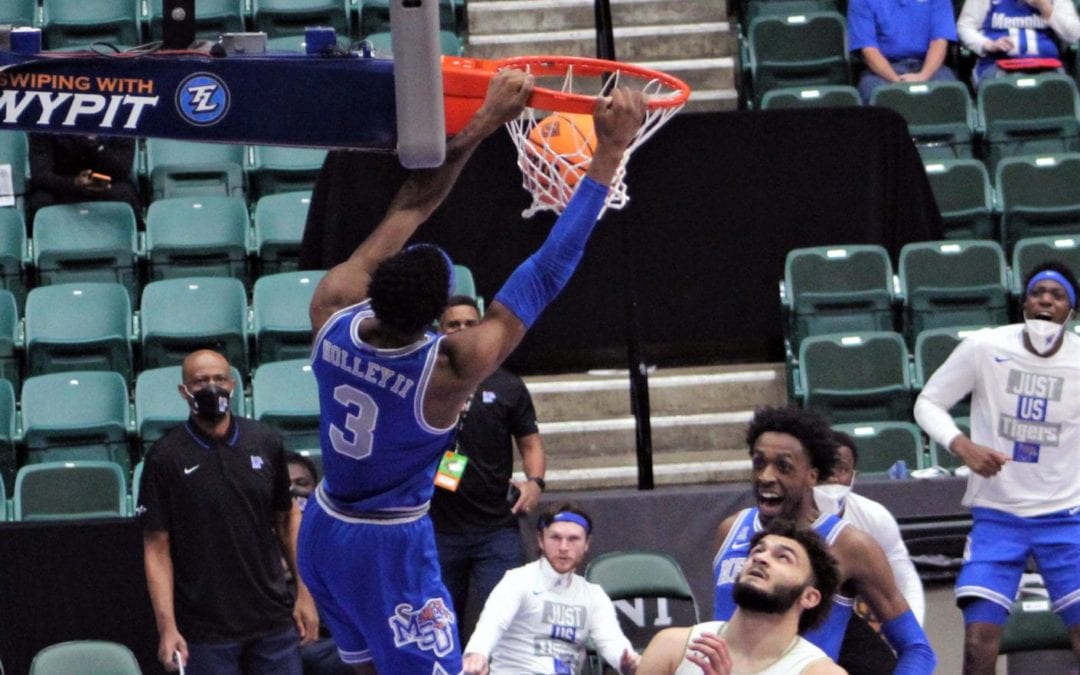 FRISCO, TEXAS — If we are in it, we might as well go ahead and win it. That was the sentiment from Memphis head coach Penny Hardaway when the Tigers missed out on an NCAA bid and got a number one seed in the National Invitation Tournament NIT).

Now coach and team are a victory away from a post-season championship.

The Tigers on Saturday romped past the Colorado State Rams 90-67 to advance to the championship game in Comerica Center in Frisco, Texas (near Dallas) on Sunday.

Memphis got off to a quick start, moving to an early 5-0 lead. The Rams were not having any of that, thundering back with an 11-0 run. The Tigers’ DeAndre Williams, who served as the energy dynamo throughout the game, ended that Colorado State spurt with a confidently-shot three pointer.

The Tigers trailed 19-7 before hitting the Rams with disruptive defensive pressure. Amid a 15-2 run, Memphis regained the lead (22-21) on a Lester Quinones three-pointer (22-21) with 7:34 left in the first half.

Memphis never up the lead after that. The defensive pressure was too much for the Rams. By the time halftime rolled around, Tigers had a solid 44-38 lead and had established that they were in it to win it.

Williams, who went to the bench after picking up his second foul with five minutes left in the opening half, did so having already scored 11 points and grabbing 3 rebounds.

The 44 first-half points bode well for the Tigers, who only scored 59 in the opening-round win over Boise State on Thursday night. The Tigers shot a Rams-rattling 50 percent from the floor in the first half, including making seven shots from three-point range. Quinones connected on three of five shots from deep on the way to a 13 points in the first half.

David Roddy, the Rams’ in-the-paint space eater, opened the second half with a three-pointer, snipping  the Tigers’ lead down to three points (44-41). Memphis responded by opening the floodgates with a 10-0 run and then wore down the Rams with some of its best shooting of the season and, of course, more defensive pressure.

Memphis outscored the Rams 46-29 in the second half and after the 10-minute mark it was just a matter of what the final margin of victory would be for the Tigers.

Landers Nolley III bounced back from a terrible shooting game against Boise State. Nolley led the Tigers with 27 points, making nine of 16 shots. Seven of his made baskets were from three-point range. He exploded in the second half with 24 points.