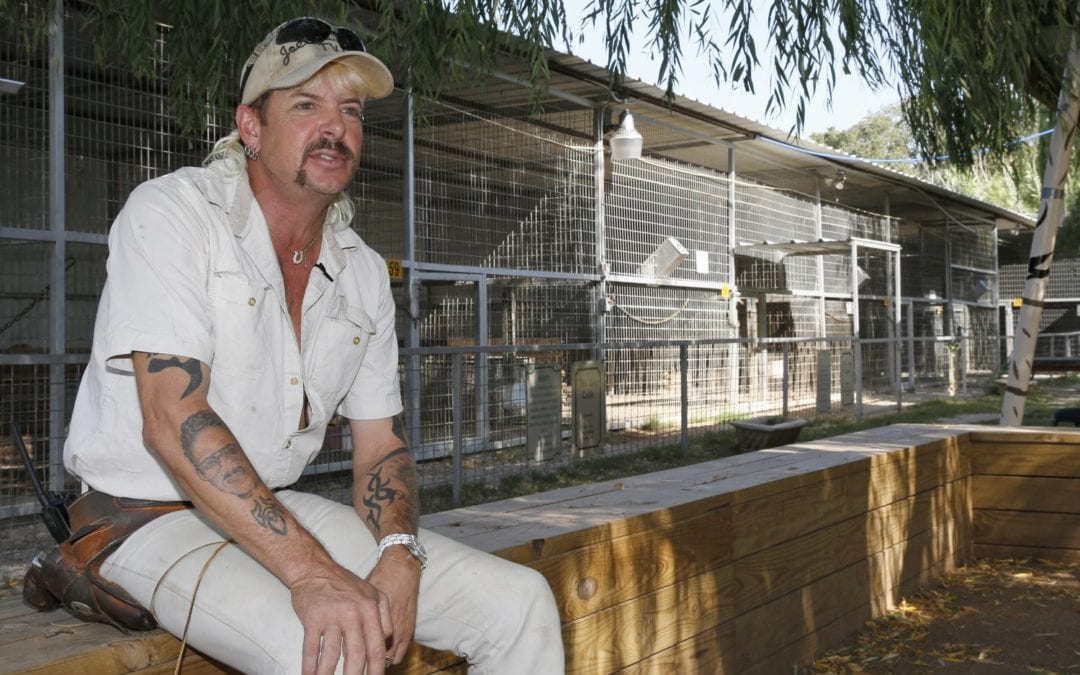 Thirty-nine tigers and three bears that were held at an Oklahoma animal sanctuary made famous by the Netflix docu-series “Tiger King” began making their way to Colorado in 2017 as part of a court-settlement transfer assisted by People for the Ethical Treatment of Animals.

The revelation, detailed in a 2017 story by The Oklahoman and recently updated by the Retro 102.5 FM radio station, underscores the role that Colorado’s biggest animal sanctuary has played in a tale that has only recently captured national attention.

“The first group of 19 tigers the (Oklahoman) article talks about came to The Wildlife Animal Sanctuary as the article states on Nov 11, 2017,” said Kent Drotar, public relations director for the nonprofit Wildlife Animal Sanctuary in Keenesburg. “They are the ones Joe got illicitly from Dade City Wild Things in Florida and drove back to Oklahoma. We went back in early December of the same year and got 20 additional tigers from Joe and three black bear cubs, hoping to get more, but Joe reneged and we have taken no additional animals since.”

“Tiger King,” which details the life and crimes of Joseph “Joe Exotic” Maldonado-Passage, is the colorful, tawdry, profane and ultimately sad story of Maldonado-Passage and his Oklahoma-based Greater Wynnewood Exotic Animal Park. Formerly known as G.W. Exotic Animal Memorial Foundation, the for-profit park was the subject of various lawsuits and criminal investigations before Maldonado-Passage stepped down as its leader and de facto mascot in an effort to evade law enforcement.

Spoiler alert for those who haven’t seen the doc: Maldonado-Passage now sits in jail, having been convicted of federal murder-for-hire and animal abuse charges.

His story, and the many others recounted in the seven-part documentary series “Tiger King: Murder, Madness and Mayhem,” quickly became Netflix’s most popular streaming series after it was released on March 20.

“We hope that people see past the hype, ‘glamour’ and intrigue and focus on the animals caught up in it all — especially the ones that are still being exploited,” Drotar said via email Wednesday.

Drotar and other TWAS staff were traveling back from Florida, having visited Dade City Wild Things (DCWT) this week to rescue “more tigers that were a part of the (group of) tigers that we should have gotten in 2017,” he said via email. That includes the 19 that ended up at Joe Maldonado-Passage’s compound.

However, Maldonado-Passage reportedly sold them and, after more litigating, they were confiscated from DCWT, a facility that is now legally prevented from having any tigers at all, Drotar added.

The transfer was detailed in a March 31 press statement from PETA, which had long played a role in trying to shut down Maldonado-Passage’s business and others like it.

“Dade City’s Wild Things is reported to have closed for good now that the last six tigers held there were sent to The Wild Animal Sanctuary in Colorado,” PETA said in the statement.

The move comes just days after PETA was awarded a default judgment and permanent injunction in its Endangered Species Act lawsuit against what it called “the sleazy roadside zoo.”

“In addition to general malnutrition, many had major dental issues, as well as orthopedic issues resulting from declaws (and) inadequate nutrition when they were cubs, since they were taken from their mothers at hours of age and didn’t receive enough Vitamin D, colostrum milk and calcium,” Drotar said of the animals’ condition.

“For the same reason, many have metabolic bone disease issues,” he said. “These are all fairly common with our rescues, but to see them across so many animals at the same time was extraordinary.”

The attention focused on private, for-profit exotic animal zoos has increased dramatically in recent days as a captive, anxiety-ridden audience occupied with the coronavirus pandemic has propelled “Tiger King” to the forefront of the national consciousness. Director Eric Goode’s sprawling docu-series has also spawned new tips on unsolved criminal cases, memes and much more.

Colorado’s nonprofit Wild Animal Sanctuary, which marked its 40th anniversary in January, maintains a 10,473-acre tract of land in Weld County that includes habitats and care facilities for large predators that have been “ill-treated, for which their owners can no longer care, or which might otherwise be euthanized,” according to its website.

The Oklahoman story was based on 2017 court documents that indicated the animals were sent to the Keenesburg sanctuary, which at the time was a 720-acre refuge with about 450 rescued animals. Even then, it billed itself as the largest carnivore animal sanctuary in the world.

“Yes, largest and oldest dedicated to rescuing large carnivores,” Drotar said Wednesday. “(That’s) both in (number) of animals and easily in terms of land available for large-acreage, natural habitats.”

TWAS’ latest IRS 990, available on its website, reports an annual budget of $20 million, almost 40% of which is in-kind donations rather than monetary donations. In-kind gifts include things like building supplies, food, bedding and office supplies.

“When everything is added up, it costs about $8,000 per year to care for an adult tiger,” Drotar said, adding that the coronavirus shutdown has negatively affected TWAS in more ways than one.

While TWAS last year saw 150,00 visitors — a modest but steady increase over recent years — its 58 employees and 160 volunteers have had trouble getting enough food to feed the animals due to people stockpiling groceries, and especially meat, over the last couple of weeks.

The operation, at 2999 County Road 53 in Keenesburg, is temporarily closed to the public due to the coronavirus shutdown. However, the 501(c)(3) nonprofit is still accepting donations at wildanimalsanctuary.org/donate.

TWAS is considering buying food on the open market due to current shortages.

“Right now, monetary donations are most helpful,” Drotar said. “Plus, just for normal operating expenses that are always present — with some supporters putting their donations on hold until things settle down — that amount of (donations) has been reduced.”

TWAS leadership is hopeful that the popularity of “Tiger King” on Netlix will encourage people to increase their support for the organization, although Drotar knows that spending cutbacks, quarantines and job losses due to the coronavirus pandemic have yet to be fully realized.

“The sheer volume of Facebook posts and new stories is indicative of how much ‘Tiger King’ has caught on with people,” he said. “Our true supporters easily see the whole negative side of (the series) and are rallying behind the popularity of the show, sharing it with friends and family and letting people know that TWAS rescued some of GW’s tigers. A lot of people would like to come visit, but again, that is being hampered by COVID-19.”

His hope is that, whatever the outcome over the next few months, people begin to advocate more for the voiceless and never financially support operations where cubs and wild animals are being handled for commercial gain.

“We are so proud to have given them a wonderful and loving home for the time they were with us and only wish GW hadn’t exploited and used them,” he said.

The tigers rescued from Maldonado-Passage, as well as the three black bears, live in a 20-acre habitat where they can roam and play, Drotar said.